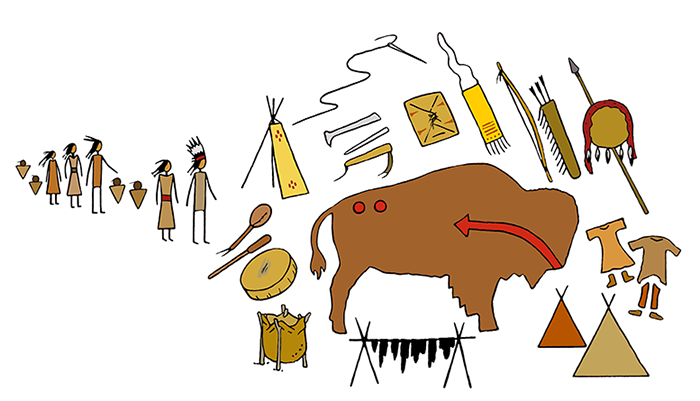 (ANNews) – A group of Blackfoot researchers have put together a website where people can view Blackfoot artifacts that were taken from Turtle Island and put in British museums, where they remain today.

The CBC reports that Blackfeet tribal historic preservation officer John Murray travelled to the U.K. with a group of Blackfoot elders and students from southern Alberta and Montana to see those artifacts in three British museums — the Museum of Archeology and Anthropology in Cambridge, and the British Museum and the Horniman Museum and Gardens, both in London.

“You could feel the energy. It was very touching for me,” Murray told the CBC. “In the Blackfoot worldview, or knowledge system, the spirit is always connected.

“That’s not unique to the Blackfeet. But we could feel that. We’ve talked about that — this particular energy that we were all able to experience.”

The Mootookakio’ssin website is the culmination of his work with Blackfoot advisors and elders from the Kainai, Siksika and Piikani First Nations in southern Alberta and the Amskapipiikani or Blackfeet Nation in Montana.

The interactive webpage allows users to engage with historic non-sacred Blackfoot belongings from the 19th and 20th centuries without having to travel across the pond.

The name Mootookakio’ssin, which translates to “distant awareness,” was conceived by Dr. Leroy Little Bear. The project is part of the Blackfoot Digital Library, meaning the copyright is held by the Blackfoot people.

The project involved undergraduate and graduate researchers from the University of Lethbridge and schools in the U.K., as well as the three aforementioned museums.

Melissa Shouting, a Kainai Nation member and graduate student at U of L, said the techniques used to make some of the items in the collection stood out to her as a Blackfoot artist.

“Once the team started working on the images and digitizing them and putting the images together so that we could see them in 3D, it was really amazing to see the detail that I couldn’t see when I had it in my hand,” Shouting told the CBC.

The level of detail is helpful for replicating items for use in daily activities and ceremonies, she added.

“It connects us to our ancestors,” Shouting said. “The stories that started to generate when we were talking about the items … we realized that we were deeply connected as a community.”

Some of the items in those museums belonged to Murray’s great-grandfather, Little Plume, a prominent Amskapipiikani chief.

In 1909, British ethnologist Alfred Cort Haddon, who had arrived in the area where Little Plume lived, wrote about the need to preserve Indigenous cultural artifacts before Indigenous people were wiped out by European settlement, which prompted these items to be taken from their owners and sent to England.

Murray said the items he helped catalogue are only the tip of the iceberg. He said their collection will grow as they’re able to access Blackfoot items in other European museums.

“This gets our [Blackfeet] back in touch with their own identity, their own self-worth,” he said. “I think it’s going to be well-received by the Blackfeet.”