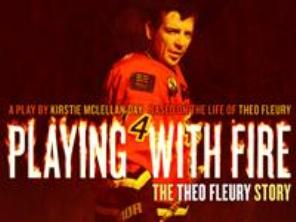 Catch the incredible story of NHL hockey great, Theo Fleury at the Citadel Theatre in Edmonton from January 28 to February 15. Playing With Fire, is an award-winning play that tells the remarkable, turbulent story of NHL star Theo Fleury and the dark, personal issues that haunted him, ultimately derailing his career.

Metis hockey player Theoren Fleury played over one-thousand games and scored over a thousand points in the National Hockey League between 1989 and 2003. He won the Stanley Cup in his rookie year with the Calgary Flames. He won an Olympic gold medal with Team Canada in 2002. 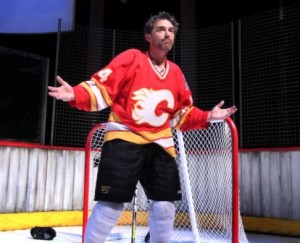 Shaun Smyth, from a scene of Playing with Fire, the Theo Fleury Story, set to open at the Citadel Theatre in Edmonton on January 28.   Photo from PostMedia files

At 5-feet 6-inches tall and weighing 180 pounds, Fleury was one of the smallest players to ever lace on skates in the big leagues. He made up for his size with a scrappy, tenacious style that led to lots of scoring opportunities–and lots of fights. Fleury was fuelled by a mad fire within, a fire that saw him repeatedly battle drug and alcohol addiction and squander much of his professional hockey fortune.

After hockey, however, he fought his inner demons as he once fought players much bigger than himself. Fleury also revealed that he had been the victim of sexual abuse at the hands of Western Hockey League coach Graham James, telling all in an autobiography called Playing with Fire, published in October 2009 with the help of Calgary writer Kirstie McLellan Day. Fleury, and other former minor league players, eventually filed criminal complaints against James, who went to jail for two years.

Fleury’s book was a hot item in the bookstores leading up to Christmas 2009. Kirstie Day subsequently turned the book into a one-man play entitled Playing with Fire: The Theo Fleury Story. The play was produced by Alberta Theatre Projects in Calgary and premiered May 1, 2012. It received great reviews from the Calgary press and was a hit with Calgarians, who had seen Fleury perform his stormy magic as a Calgary Flame for so many years.

In the 2014-15 Season, the Citadel Theatre and Prairie Theatre Exchange of Winnipeg are proudly co-producing new performances of Playing with Fire: The Theo Fleury Story, again starring Shaun Smyth in the role of Theo Fleury and again directed by Ron Jenkins. Funny and insightful, even as it is painful and poignant, Playing with Fire is a truly inspirational tale – the triumph of one man’s spirit over seemingly impossible odds.

A one-man show featuring the very talented Shaun Smyth as Theo Fleury, Playing with Fire is performed entirely on hockey skates, in full hockey gear and on a stage made of synthetic ice.

Based on the playwright’s best-selling biography and developed with Fleury himself, Playing with Fire is the brutally honest story of how a 5’6” Metis youth, who grew up in Russell, Manitoba and played for the Winnipeg Warriors, overcame incredible challenges – including his own demons – to become an NHL star.

“I want everyone to know that anything is possible. That’s why we wrote a play – so that people will see my life from a completely different perspective. It’s a story of survival, and overcoming amazing obstacles,” explained Fleury.

Theoron Fleury today is a motivational speaker who hopes that sharing his story will encourage others to seek help against abuse and not suffer in silence. In this context, the Citadel has worked cooperatively with the Sexual Assault Centre of Edmonton (SACE) to promote the play and its call to end any stigma against the victims of sexual abuse and to encourage people to speak up if they are abused. An SACE public education team will be at the play’s opening night on January 28. Click here to learn more SACE.

In 2012, after having viewed Playing with Fire, Calgary CBC theatre critic Jessica Goldman summed up the production with these remarks:

“For the guys – Seriously, you need to ask? You’ll love every minute of it. And if you are worried that the abuse parts are too much to handle – let me assure you it is discussed with class and intelligence.  SEE IT.

“For the girls – There were LOTS of female hockey fans in the audience – but regardless if you like hockey or not, this is a fabulous character story that will have you rooting for Theo despite his many flaws.  SEE IT.

“For the occasional audience – Foul language, some uncomfortable story elements and a two act monologue may make you wary. You shouldn’t be. This is great theatre that will make you laugh and cry and tell you a great story.  SEE IT.

“For the theatre junkie – This show is a fourple threat (I just made that word up). The writing, the acting, the directing and the set will rival some of the best theatre you’ve seen.  SEE IT.”

Be the first to comment on "Playing with Fire, the Theo Fleury story is coming to Edmonton’s Citadel Theatre"