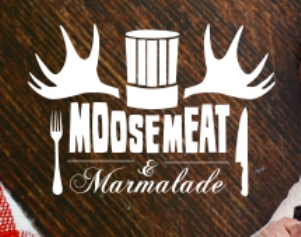 VICTORIA, BRITISH COLUMBIA–(Marketwired – Jan. 5, 2015) – If you’re seeking to expand your culinary horizons in 2015, explore Aboriginal cuisine or follow the latest hipster food trends, Moosemeat & Marmalade is the show to watch! Premiering January 7th on APTN, this hilarious documentary series brings audiences a new level of cooking entertainment, thanks to the contrasting styles and cultures of two of Canada’s cutting-edge culinary contributors: Art Napoleon and Dan Hayes. Tune in this montb and get ready to explore a cornucopia of cooking entertainment. 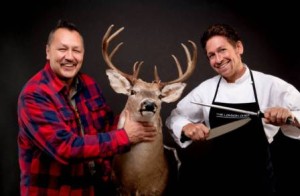 “Our vision with Moosemeat & Marmalade is to bring together two important food trends: society’s obsession with food as art and our growing concern for food sustainability,” explains Mike Wavrecan, Producer, Mooswa Films. “Viewers can expect to laugh a lot as they learn innovative recipes they can make at home, along with a few that are slightly outside of their comfort zone!”

“One of the biggest production challenges we faced was to hunt and forage successfully for our ingredients within the production timeline,” explains Director Hilary Pryor.” But we got lucky – even the wild buffalo turned up on set right on time!”

Each week, acclaimed First Nations cook, Art Napoleon will compete with classically trained European celeb Chef Dan Hayes, to explore and prepare a signature dish from one of their cultures. In each episode, viewers will experience a food and culture adventure, learning about hunting, spirituality, foraging for food, gourmet food photography, and preparing everything from pheasant to beaver in venues as far ranging as a Cree smokehouse to a Michelin starred restaurant.

Leo Nominated Art Napoleon has been seen on a wide variety of popular programs including Zed TV, Dead Dog Comedy, CBC, All Points West, and the New Canoe, to name a few. As an acclaimed First Nations Bush cook, Art’s vast expertise as a hunter and outdoors cook, his spiritual passion for food sustainability and his unparalleled knowledge of indigenous plants and wildlife can be seen in every dish he creates.

Chef Dan Hayes is the chef and owner of The London Chef, a dynamic and interactive cooking school, café, pantry and catering kitchen located in Victoria, BC. Dan has been in the kitchen for over 15 years working with some of Europe’s most revered seafood chefs including Rick Stein, Mitch Tonks and Peter Rossiglioni. Having worked as a food stylist, cooking instructor, and corporate chef, he brings to this show a wealth of classical training, food passion and technical expertise.