There’s always a good story somewhere out there to share and it won’t take long to find one if you walk through the doors of Edmonton-based Amiskwaciy Academy. There’s usually something new to talk about and at the beginning of the school year even some new people to talk to. That was the case earlier this month when I went to the school to talk about the Academy’s recent Winter Feast, an annual undertaking that gets underway just before the Christmas season.

The Academy has two new staff members on board this year – Taro Hashimoto and Lyle Laboucane – and they spoke candidly about their new roles at the school. 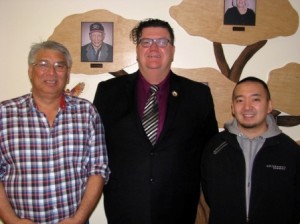 Fifty-three year old Lyle Laboucane worked for 20 years as a roofer before he started driving a bus for Ben Calf Robe’s Head Start Program, an exciting pre-school program that is now based out of Amiskwaciy Academy. He left that job last year and relocated to Fort McMurray where he worked as a parts driver for a local company. Then he heard about an opening at Amiskwaciy Academy.

“When I heard that a job had come open at the school and that it would involve working with Elder Francis Whiskeyjack, I moved quickly to get an application in,” he explained. “I’ve always liked working with kids and because roofing and hauling goods are jobs better suited to the younger generation, I decided to apply.”

He was hired as the school’s new “Oskapewis” or Elder’s Helper, a job he knew nothing about but was very willing to learn.

“It is very different from the work I’ve done in the past but it is a new challenge and so far everything is going well,” he smiled. “I am learning some new things every day and though it will take time to learn everything, I do have my feet wet and I am willing to learn so maybe that’s all it takes for an old guy to get a new start. This job, like most, involves a great deal of positive communication and that is something I am used to; as a bus driver for the Head Start program I spoke with, dealt with and shared stories with many youngsters. It’s something I really enjoyed and I think I’ll be able to put those skills to good use here at the school.”

The second addition to the staff, Taro Hashimoto, is a recently hired Outreach worker who is helping to revive the school newspaper, which features stories and articles written by students. Raven’s Story, a short vignette written by Amiskwaciy Academy student, Raven Kootenay, is a well written and delightful story that describes events that happened within his family before he was even born. His short but interesting narrative gives readers insight into the reasons why this young man got his name, but more than that it is a memorable piece of literature that communicates, teaches and shares. The story he penned can be found on the back page of the Winter Edition of The Eagle (Ki Hew),  Amiskwaciy Academy’s new student newsletter publication.

“A brilliant piece of work by an intelligent young man who is working hard to ensure that his life is filled with positive goals and positive outcomes,” smiled Hashimoto, who is already making a positive difference in his new job. “Raven is a member of the Academy’s Indigenous Leadership group (class) and one of the many students at Amiskwaciy who goes the extra mile to ensure that his grades are kept up and his goals remain within reach.”

Hashimoto isn’t a newcomer to the Academy; in fact this is the third time he’s participated in activities at the popular Kingsway Avenue-based public school. The first was three years ago when he came in to help work on a video project  with Conway Kootenay.

“That video can be seen on the website,” added Hashimoto, “where it is being used as a promotional tool for the school.”

Two years ago he worked with the Academy’s critical outreach program; that was when the school’s first newspaper was created.

“Some people believe that a school newspaper is no longer a viable source of communication,” noted Hashimoto, “but fortunately that belief doesn’t exist here. Communication is everything – whether it’s through conversation, the written word, a video presentation or other means we can always find new and interesting ways to share our stories, and express our ideas. By working on projects such as newspapers and brochures we gain a better insight into the importance of communication, especially as it relates to storytelling and building self-esteem. Just talking to the students for a few minutes tells us that there is definitely no lack of content; everyone has a special moment to share. When we put the paper together a couple of years ago there was a lot of enthusiasm and I hope that continues as we set out to establish a new communication tool for the students and the school.”

The 2014/15 Winter Feast, which took place on December 18, got underway with greetings, best wishes and welcoming words by Elders Francis Whiskeyjack, Don Langford and Marie Lund and by Amiskwaciy Cultural Society board member Leith Campbell.

“I think the 2014 Winter Feast was the biggest one we’ve ever had,” noted Principal Fred Hines, who spoke at length about the purpose of the annual events and the impact they have in the community. “There were more than 450 guests this year; a record number I believe and once again the feedback has been very positive.”

Schools throughout the area and beyond are invited to attend Amiskwaciy Academy feasts and other special events that celebrate culture, tradition and both individuals and organizations who are making a positive difference in the lives of Aboriginal students, their families and communities.

“We have a lot of recurring schools, such as Eastglen and Center High but we really want to get new schools and new kids out to these events. Elementary and high schools are both invited and we encourage them to attend if at all possible. The students will learn about the feasts and why we host them, they’ll enjoy some good entertainment and an outstanding meal provided by our very excellent kitchen, which includes a list of appreciated volunteers. Non-feast events could include job and career days that see a variety of schools, colleges and universities join here with companies and organizations and trades-related industries. These events stimulate awareness and students have the opportunity to explore new ideas and learn about the various career paths and post-secondary opportunities that await them.”

“It’s especially nice to see students from other schools attend our events, enjoy our hospitality and help us promote cultural awareness and celebrate the giving of thanks to the Creator.

The school has recently been involved in other activities as well, including a successful clothing drive, initiated by Amiskwaciy students and staff to help those facing clothing shortages during the cold winter months get some of the winter clothing they need.

“The clothing drive,” explained Hines, “culminated on the last day of school when along with several students, we went to the Boyle Street Co-op and delivered several thousand dollars worth of clothing. Once again, the Indigenous Leadership students took the reins and brought this project to a very successful conclusion.”

One of the biggest surprises during the 2014/15 Winter Feast came when the Amiskwaciy Society, (a non-profit group created by the school to help raise funding), presented $15,000 to Amiskwaciy’s hot lunch program. The cheque was presented by Amiskwaciy Society Board Chair John Vrolijk, who along with fellow board members Leith Campbell, Louis Hayes, Don Langford, Herb Belcourt and Florence Gaucher, offered thanks and appreciation to every individual, company and organization who helped to make the donation possible.

“Extra funding is always in demand and we are just one of many schools that have to raise money so we can provide the best educational environment possible,” noted Leith Campbell. “The school’s lunch program will benefit from this donation; it should hold the fort for awhile, but we are looking at different ways to raise funds. With oil prices down and the Canadian dollar below par we can’t realistically expect any increases in funding from the province right now.”

One of those plans includes submitting an application to Alberta Gaming for one of the two-day partnerships with a local casino operator; non-profit organizations and societies have utilized this unique program for years, usually with positive results. Spaces are limited and known to be hard-to-come-by.

“It is an interesting way to generate funds and we do plan to submit an application,” noted Campbell, who said the extra money would go to such things as “providing scholarships, helping families to attend events, proving bus passes for students” and more.

The Amiskwaciy Society is always interested in looking at new ways to raise funds and appreciates every donation they receive; the kids are the ones who benefit and that makes every gift very much worthwhile.

Entertainment was provided by the Metis Child Fiddlers and Dancers. Guests were also treated to a first-ever performance at the Academy by well known hoop dancer, Lakota Tootoosis.

“He was awesome and his performance was very much appreciated by everyone in attendance,” noted Principal Hines. “We are all patiently awaiting as winter wanes and the changing of the seasons begin.”

That’s when the next event – the annual Spring Feast – gets underway; see you there!