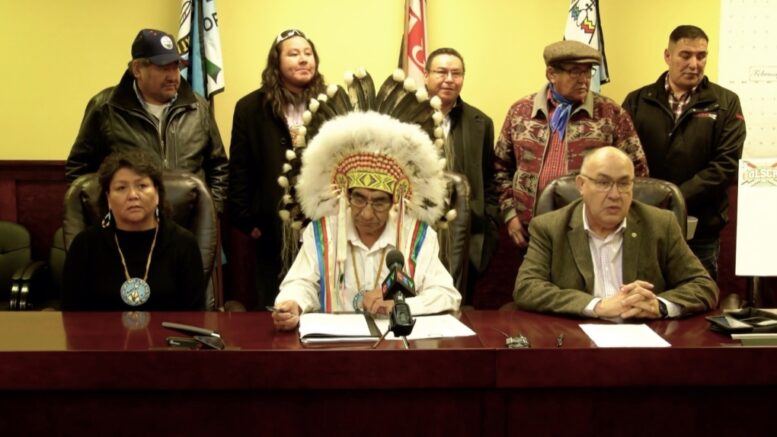 Onion Lake First Nation press conference announcing they have filed a law suit against the Province of Alberta. (Screenshot)

(ANNews) – A First Nation located on the border between Alberta and Saskatchewan is the first to launch a legal challenge to Alberta Premier Danielle Smith’s Alberta Sovereignty Within a United Canada Act.

On Dec. 19, Onion Lake Cree Nation filed its statement of claim against the Sovereignty Act, or Bill 1, calling the legislation “offensive to the spirit and intent of our Treaty.”

Smith’s signature piece of legislation allows the provincial government to challenge federal legislation it deems to be counter to Alberta’s interests.

Indigenous nations from Treaties 6, 7 and 8 territories have said they weren’t consulted on the legislation, which has major potential to impact their Treaty rights – the product of an agreement with the Crown, not the province.

“We have no choice but to use the colonial courts to defend our Treaty rights and sovereign jurisdiction as Alberta has passed this law without any consultation from our Nation.” – Okimaw (Chief) Henry Lewis

Lewis added that there’s no evidence from any of the debates in the legislature, or anywhere else, that the UCP sought consultation with any First Nations.

This lack of consultation is a blatant violation of Treaty 6, which was signed with the Crown in 1876 — well predating Alberta’s existence as a province, the news release notes.

“Not once did the Government of Alberta meet with us about the proposed law to ask for input into how it would impact us. Even the Minister of Indigenous Relations [Rick Wilson] admitted that not enough consultation had been done,” Lewis said.

“What does that say about the Government of Alberta’s relationship with Indigenous peoples when the minister in charge of Indigenous relations says more could have been done?”

Chief Lewis said the Government of Saskatchewan, which has proposed, but has yet to pass, similar legislation, the Saskatchewan First Act, ought to withdraw it while it still has the chance.

Michael Marchen, a lawyer representing Onion Lake Cree Nation, said at a news conference covered by the Edmonton Journal that a lack of consultation with First Nations the legislation would impact makes it blatantly unconstitutional.

“It wrests control of all treaty rights and the treaty relationship from the Crown and right of Canada, to the Lieutenant Governor and council of Alberta,” he said.

The nation is seeking an injunction against the bill and legal costs.

Onion Lake Coun. Bernadene Harper told the news conference that the nation wants to improve relations with the provincial government, but that in order to do so the legislation must be scrapped.

“I speak from the heart: Today we are here, we are alive, and we are still willing to work with the government according to the treaties that were promised to us. They made a promise when they made that final decision,” she said.

NDP justice critic Irfan Sabir called the bill an “avoidable setback for reconciliation and a blow to economic certainty.”