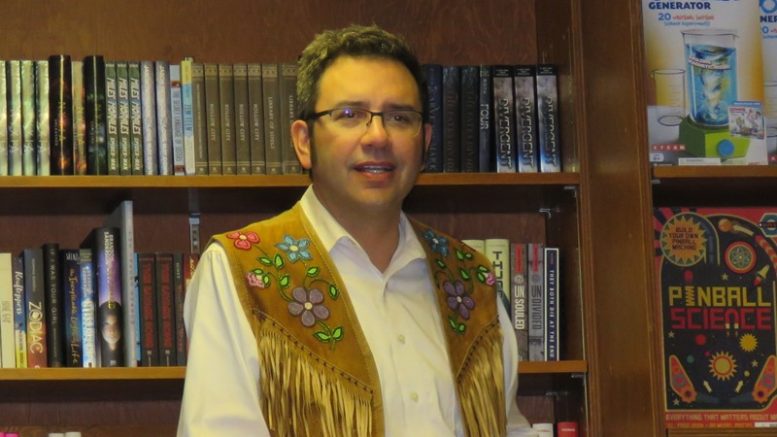 Author Richard Van Camp is one of the mentors working with the Audible Indigenous Writers Circle.

(ANNews) – Audible’s Indigenous Writers Circle program, which connects up-and-coming Indigenous writers with mentors, is back with a new crop of students and some new mentors.

Participants have the opportunity to work with renowned writers, such as Richard Van Camp, Angela Sterritt, Reneltta Arluk, January Rogers, Dr. Jas M. Morgan and Clayton Thomas-Muller, who assist them through the writing process and walk them through finding a publisher.

‘Speculative fiction,’ Conrad explained, is an umbrella term for various well-known subgenres, such as fantasy, science fiction and magical realism, each with their own set of subgenres.

Conrad, who said writing has always been a “steadfast hobby” of hers, first met Van Camp after their short stories were featured in the same 2011 anthology, Coming Home: Stories of the Northwest Territories.

Van Camp encouraged her to apply to the program, “because it would be a good step for me to take in order to keep on exploring my own writing.”

Conrad is in the process of writing a novel, Fish Bait, which she describes as a “dark coming of age story.”

The protagonist is an orphan girl, who develops a personal relationship with the Great Slave Lake, or Tucho. This relationship “helps her overcome many barriers, but with a cost,” Conrad said.

“I heavily rely on a lot of magical realism tropes for that story, in addition to the lived experiences of my peers and family, and some oral histories I’ve heard from my Elders pertaining to the lake and all of its inhabitants,” she said.

Conrad’s Dene heritage is “the roots from which my stories come from,” she added.

She said she’s drawn to her people’s stories “because they contain so many important life lessons and values, and fantastical characters and creatures.”

Conrad said she values the writers circle for giving her the “space to create and relate to my peers, and to foster an Indigneous writing community.”

Shelley Willier, who lives in High Prairie, is being mentored by Angela Sterritt.

Willier is writing a story about her father, who was sent to the St. Bruno Indian Residential School on the shores of Lesser Slave Lake, when he was seven years old.

She said Sterritt was a “perfect matchup” for her, since Sterritt is in the process of publishing a book that is semi-autobiographical. “Her perspective and insight are priceless,” Willier said.

For Willier, “storytelling is about creating space and reclaiming space.”

As a mother and educator, she has a penchant for writing children’s literature, but this book is “sitting in a different genre,” since it tells her father’s story from childhood to adulthood.

The book is split into three sections, with each section introduced by poetry. Its purpose is to recount the horrors her father witnessed while at the same time charting a path forward to forgiveness.

“When we’re looking at the social landscape today, we are spending a lot of time talking about reconciliation. In order to have a strong relationship and move forward … the truth has to be told,” Willier said.

“When the crushing weight of history lands on you, what do you do to get through? That’s the question that’s central to this piece.”

Justin Buffalo, who hails from Samson Cree Nation, is working with Clayton Thomas-Muller, who is also Cree.

Buffalo is writing what he calls a “pseudo memoir,” which is based on aspects of his life.

Thomas-Muller chose Buffalo to be his student, which Buffalo said makes sense to him from reading Thomas-Muller’s work, given their shared focus on urban Indigenous stories.

The story is about a man who is in fact a bear and his attempts to attend his late brother’s wake. Once he reaches the wake, the perspective shifts to his brother’s children, as they hear other people’s stories about their father.

There’s a scene with a so-called starlight tour, when police drive an Indigenous person to the edge of town and leave them there in the freezing cold.

Buffalo was a victim of this practice in Edmonton when he was younger.

He was working at a drug rehabilitation centre in northern Alberta when he received a message from his grandmother who suggested he apply to the writers circle.

Buffalo had no expectation of being accepted into the program, since he’d never been published as a writer, describing himself as a “scribbler” who reads a lot.

“I was a dirty little res kid from the outskirts of Maskwacis … so I didn’t think much about it until I got in,” he said.