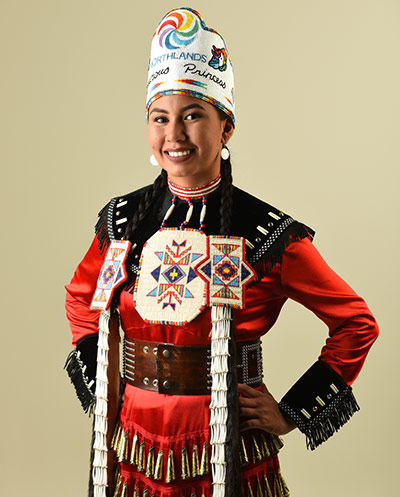 Before the Career Fair’s mini-workshops and presentations got underway, she sang the National Anthem and spoke briefly about her role as an Indigenous Princess. In an interview she confided: “I’ve been having a lot of fun and gaining a lot of knowledge during the past year, though it has been quite a humbling experience at times. I’m very proud to have been chosen as Princess and to take a forward step in helping to ensure that the Northlands Princess Pageant is a positive and rewarding experience and an opportunity I hope that will see many women step forward this year to participate as contestants.”

Since being named Northlands Indigenous Princess Brittney has participated at numerous events at Northlands and elsewhere as her recognition grows in both Edmonton and throughout Treaty 6. She has been involved with several public speaking events and worked with several advocacy groups and on April 27-29 she will attend the Gathering of Nations Powwow in Albuquerque, New Mexico.

Brittney has also been working with kids in Edmonton elementary to high school classrooms, something she does twice a week as she talks about and teaches aspects of her culture.

“I’m encouraging and teaching the kids to dance,” she smiled. “The kids are learning how to dance, though many were very shy at first. I spoke with them about the importance of self-empowerment and knowing who they are as individuals. The interest grew and eventually they came on board. Today they’re doing very well; some have been become empowered not just by the music and the dance but also by their abilities and the new-found enjoyment that they hadn’t realized was possible.”

“Serving as Northlands Indigenous Princess this year has been a rewarding experience and has given me many memories that I will be able to share in the coming years,” added Princess Brittney. “I’d like to encourage all of the young women in our Indigenous communities to come out this year as contestants and continue what Northlands has begun. Participation is not just fun but it has many rewards as well and I hope to see a long list of competitors vying for the title at K-Days 2017.”