Northlands is proud of its relationship with First Nations. As it is situated on traditional territory of Treaty Six it is important to ensure the story of the Indigenous people is shared with all. It is because of this connection Northlands is honoured to include the second annual traditional Pow Wow during K-Days, which will host members from Indigenous communities within Treaty Six territory and across Canada. 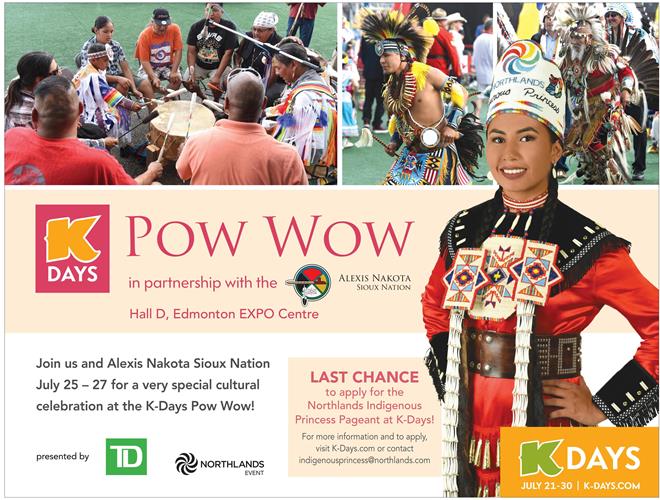 Northlands and representatives of the Confederacy of Treaty Six First Nations are pleased to be hosting the Northlands Indigenous Princess Pageant once again this year to showcase and embrace Indigenous culture at K-Days and throughout the year at Northlands events.

Princess Brittney Pastion speaks highly of her experience this past year and strongly recommends other young women to participate in the pageant.“Serving as Northlands Indigenous Princess this year has been a rewarding experience and has given me many memories that I will be able to share in the coming years,” explained Princess Brittney. “I’d like to encourage all of the young women in our Indigenous communities to come out this year as contestants and continue what Northlands has begun. Participation is not just fun but it has many rewards as well and I hope to see a long list of competitors vying for the title at K-Days 2017.”

In continuation of the festivities and the second annual K-Days Pow Wow presented by the Alexis Nakota Sioux Nation, Northlands is enthusiastic that the Indigenous Princess Pageant has become an integral part of the K-Days programing that enhances and elevates that partnership and also provides an ambassador for Northlands to build the relations within the community.

The Northlands Indigenous Princess Pageant hopes to encourage and continue to develop Indigenous girls and women as community leaders and ambassadors while educating Edmontonians and keeping traditional native traditions alive.

The primary goal is to engage the Northlands Indigenous Princess throughout the year as an ambassador of goodwill for Northlands, where she will attend numerous appearances and events to educate the community while developing her communication skills through teaching and sharing in rich traditions, culture, and heritage of the Indigenous people.

Since being named Northlands Indigenous Princess Brittney has participated at numerous events at Northlands and elsewhere as her recognition grows in both Edmonton and throughout Treaty 6. She has been involved with several public speaking events and worked with several advocacy groups and this past spring she attended the Gathering of Nations Powwow in Albuquerque, New Mexico.

In addition to the Indigenous Princess Pageant, the K-Days Pow Wow will feature a dance and drum competition with cash prizes and a wonderful lineup of entertainment.  The following is the tentative schedule – check the website for updated information. 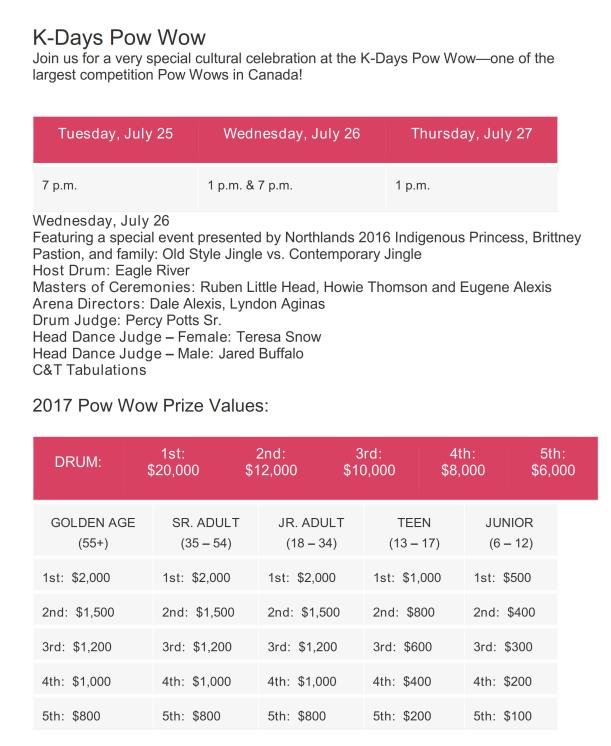