Northland School Division #61 (NSD61) serves more than 2500 students in 24 different schools throughout the northern half of Alberta. Since its inception in 1983, NSD61 has provided quality education and various unique learning programs for thousands of students, many of whom are First Nation and Métis children and youth. The vast array of programs offered throughout the Division are designed to allow students to achieve academic excellence while at the same time encompassing all cultures and racial identities.

The 2013-14 school year was particularly busy as students from across the northern regions of the province were able to achieve their goals both scholastically and through participation in a number of interesting and exciting projects that included field trips, cultural events, career fairs, athletic competition and more. 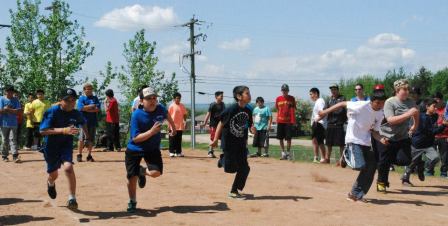 “Students, parents, staff and community members,” she noted “travelled from across the northern half of Alberta to attend the regional track and field competition. It was truly special to watch students challenge themselves, smile and achieve success.”

She congratulated all of the athletes and thanked the many volunteers, parents, principals, teachers, support staff and community members who took the time and went the extra mile to ensure the continued success of both the students and the learning programs they participated in.

The newsletter also featured some of the events that took place during the year and in doing so let it be known that NSD61’s schools are finding and developing creative ways to inspire innovation and excellence for students.

As explained in the newsletter, the purpose of the event is to help students make connections with curriculum through the learning of First Nations, Métis and Inuit (FNMI) traditions. Students gathered knowledge from Elders and community members, learning how to construct a fish net, scale and smoke fish and prepare and cook dry meat and bannock.

Moose hide tanning, carving canoe paddles and handles for axes, creating mixed media art and learning about the history of Peerless Lake, its early ancestors, the fur trade and residential schools, were also a part of the Cultural Days event, much of which was taught through a series of stories by community members and Elders. 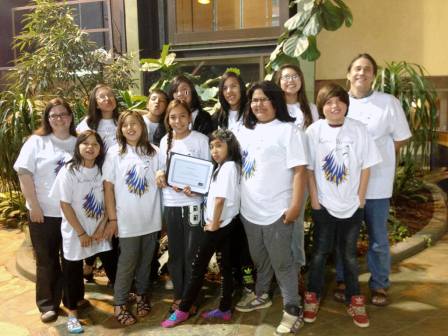 Students from Kateri School had a terrific experience at the Envirothon 2014 competition in Hinton.

High school students from Kateri School made the trek to the Hinton Training Centre to participate in the Envirothon 2014 competition. It is an annual hands-on team challenge designed to test student’s knowledge of soils, aquatic ecology, forestry, wildlife and energy. The theme of the 2014 event was “Sustainable Agriculture Locally Grown.”

The competition consisted of written exams, field tests and a presentation by each team, who discussed solutions to the various problems raised during the testing.

Kateri School students from Trout Lake experienced a unique situation at the event. They teamed up with students from St. Albert’s Paul Kane High School. Kateri teacher Marian Reichel said students worked well together and in doing so they developed lifelong friendships. Reichel noted that at this year’s Envirothon for high school students, “30 percent of the teams came from First Nations schools.”

The school teams also had the opportunity to compete in a $100 challenge, and were able to visit the Forestry Museum at the Hinton Training Centre where they learned about Forest Management and the role of forest rangers in Alberta.

Grade 5-8 students, parents/chaperones and teachers from the Little Buffalo School travelled to the west coast in late May. The journey began with a visit to the popular Vancouver Aquarium before crossing the famed Capilano Suspension Bridge and watching a performance at the world renown, Cirque du Soleil.

“After enjoying a few of the many attractions in Vancouver, (the group) hopped on a ferry and landed in Victoria. The final leg of the trip gave many students, parents and teachers a chance to whale watch for the first time.”

Among the other highlights experienced during the four day outing were visits to the Royal British Columbia Museum, Miniature World, Victoria Bug Zoo and a tour of the city via water taxi and harbour bus. The field trip was made possible through fundraising events organized by students, parents, staff and community members.

Another first for NSD61 activities saw Elizabeth School host its first-ever Career and Education Fair, an event that took place on June 16. The fair showcased the many successes and role models within the Elizabeth Métis Settlement where students were able to meet role models and ask questions about future careers.

During the fair, older students participated in a passport competition. The challenge encouraged students to gather as much information as possible from each presenter. Students who had completed passports were entered into a draw for prizes. One lucky student walked away with an iPad Mini, which had been donated by the presenters from Seven Lakes. The event was organized by local School Board Committee members Shelley Bartman and Tracy Jackknife and the Education Week Committee.

“We will continue to help educators strengthen Aboriginal and English language development with students by multiple strategies,” assured Barret. “The 2014-2015 budget allows us to improve the Division-wide Literacy Initiative, provide professional learning opportunities for staff, assist schools with community engagement events and host a New Teacher Orientation for new teachers to NSD61.”

NSD61 is part of the province’s Public School Division. Some schools do offer religious education with prior approval from the Local School Board Committee. Teaching positions are available throughout the region most years, a fact that can be attributed to the northern region’s lack of urban city amenities. Many teachers in the north remain on staff for 3-5 years before moving on to continue their careers, thus creating new opportunities for teachers interested in teaching and living in a rural environment. As in most Alberta communities, residents enjoy and participate in events that include hockey, cross country skiing, hiking, tobogganing, hunting, fishing, baseball, arts and crafts and relaxing and enjoying the amenities of nature in its finest moments; the birth  of spring and the cleansing of winter.

Congratulations to Northlands School Division #61 for another successful and activity-filled year!