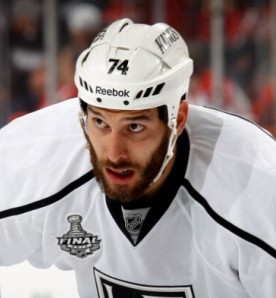 The Los Angeles Kings hockey club has announced the signing of a new three-year contract with left winger, Dwight King, a Meadow Lake Saskatchewan resident and a member of the province’s Métis community. The six foot four inch, 230 pound, 25 year old NHL star has been a regular roster player with the reigning Stanley Cup Champions since November 16, 2010, when he was called up from the AHL’s Manchester Monarchs to replace the injured Alexei Ponikarovsky. His first NHL game took place in Los Angles the next day when he suited up for a home game against the Columbus Blue Jackets.

His first goal came on February 12, 2012 against the Dallas Stars. During the 2012 Stanley Cup playoffs he scored five goals and added three assists as Los Angeles went on to beat the New Jersey Devils and won their first-ever Stanley Cup championship, a feat they repeated last year when, on June 13, 2014 the Kings defeated the New York Rangers in five action-packed games. 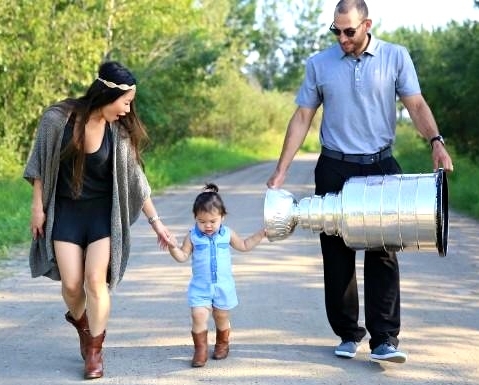 Meadowlake Saskatchewan resident and L.A. Kings forward Dwight King shared the 2014 Stanley Cup in his home community and is shown here, with his wife Lauren and baby daughter, Grace. Article by John Copley

“The run to the Cup was arduous; it was a really tough playoff season,” King said in a recent interview from his home in Meadow Lake. “It’s not my story, it’s a team story and how everyone on the club rose to the occasion, met the challenges and overcame all adversity. It’s about a group of players that came together and competed for one another. It’s about a great coaching staff, first class ownership and a fan base that is second to none. It was also a dream come true, one that puts a smile on your face, vigour in your step and determination to do it all over again next year.”

Dwight King laced up his first pair of skates when he was just five years old. Living in a northern Canadian community, where the winter’s can be harsh and sports options limited, hockey is the go-to sport for almost every kid on the block. It’s a time when skills begin to develop, dreams begin to form and ice-time can be difficult to arrange.

“We were lucky,” he said. “We got the ice time, we had some good coaching and parents that really got behind the game.”

It’s also the beginning of a time when practice, personality and prowess combine to determine just what the future might bring. 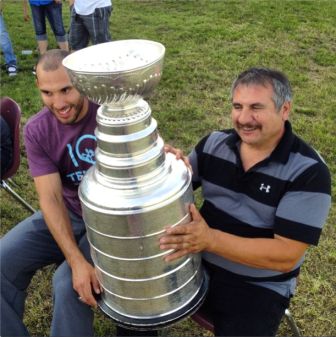 Dwight King with his dad.

“As a kid you just try to compete, to be the best you can be,” he said. “You want to please your parents, satisfy your coach and win hockey games, but eventually, as you grow and develop you envision brighter lights and come to realize that this is what you want to do – you want to play hockey, you want to make it to the next step, you want to play in the best league in the world, the National Hockey League.”

Along with those dreams comes the realization that try though you might, not every kid gets the opportunity to progress through the ranks and into the NHL.

“I was fortunate in that I had some brawn and some brains,” said King, “and I tried to make the best of every moment, every opportunity.”

Dwight King was drafted by the LA Kings 109th overall in the 2007 NHL Entry Draft – but the road to the NHL was long and weary. It began when he was just 16 years old and found himself playing in the Western Hockey League where he spent five seasons (2004/05-2008/09) with the Lethbridge Hurricanes. He made his professional debut during the 2009-10 hockey season when he played 20 games in the ECHL with the Ontario Reign. He then moved on to the Kings affiliate AHL team, the Manchester Monarchs, before being called up to the majors in November 2010.

“It was quite a ride, but it was great time in my life and I learned a great deal from all of my coaches and teammates during those early years,” he added. “I also had some real good support from my family and friends, including those I met throughout my early playing career.”

This past season, Dwight King led his team with two short-handed goals, earned his first career hat trick against the Phoenix Coyotes on Oct. 24, 2013, and set new career highs for most games played (77), most goals (15), most assists (15) and most points (30) in one season. On the Kings roster, he tied for fourth in goals, finished seventh in points and finished fifth in plus-minus (plus-16) ratings.

But it takes more than skill to make it to the upper echelon; it takes perseverance and an ability to work within the structure set up by those who coach you along the way. According to King, the key to making it in professional sports is “all about attitude, finding your niche and remaining true to yourself.”

“The only person in the world who can determine whether you succeed or fail is you,” noted King, answering a question about what he’d tell young people wanting to pursue a career in hockey, or any other sport. “You need to concentrate and pay particular attention to the aspects that are important to achieving your goals. It takes hard work, determination and constant improvement.

“You have to know when to talk and when to listen. You have to be a good teammate and keep everything in a perspective of “we” rather than “me” and you have to have respect, not just for your teammates and coaches but for the game itself. I paid attention and followed instructions and over time it all paid off for me. I try to play a passionate game and be as versatile as I can be; you have to establish your own identity and hopefully meet the expectations of those who guide you and pay you.

“The most important thing is to believe in yourself and appreciate every day by working hard and giving your all. You also need to have good people in your corner, steer clear of negativity and be sure to think about the consequences of your every action. Remember that everyone has a camera and a microphone today and that’s important because your future is at stake and you don’t want to say or do anything to jeopardize that future. Work toward achieving positive goals and you will give yourself every opportunity to be successful, no matter what your career field of choice may be.”

As well, concluded King, “If you are true to yourself and honest with everyone else, you will succeed.”