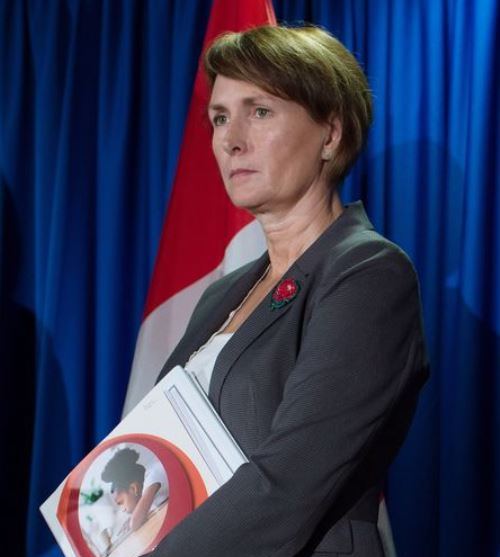 B.C. Representative for Children and Youth Mary Ellen Turpel-Lafond listens during a news conference after releasing a joint report with the B.C. Information and Privacy Commissioner about cyberbullying, in Vancouver, B.C., on Friday November 13, 2015. They are recommending the provincial government develop a cross-ministry strategy to prevent and mitigate the effects of cyberbullying and educate children and youth on digital citizenship. THE CANADIAN PRESS/Darryl Dyck

VICTORIA – An alarming number of girls in the care of the provincial government – including a highly disproportionate number of Aboriginal girls – have been the victims of sexualized violence while in care, says a report released today by British Columbia’s Representative for Children and Youth.

The actual number of children in care who experienced sexualized violence during this reporting period is likely far higher, Representative Mary Ellen Turpel-Lafond said, because such incidents are typically under-reported or not reported until well after they occur. Her report, Too Many Victims: Sexualized Violence in the Lives of Children and Youth in Care, concludes that B.C.’s foster kids remain at high risk for such abuse.

“These are disturbing numbers when you consider that we are talking about young people who in many cases are already traumatized, who can no longer live with their families, and whose protection is the responsibility of the government,” Turpel-Lafond said.

“Clearly, there is an urgent need to better prevent and to respond more appropriately to sexualized violence against children and youth in care – particularly when it comes to Aboriginal girls.”

Sixty-one per cent of the children and youth in this review who experienced sexualized violence were Aboriginal girls despite the fact that Aboriginal girls comprised only about 25 per cent of the total children in care in B.C. during the time frame examined. Female victims in this review who were age 12 or younger at the time of the incidents were four times more likely to be Aboriginal than non-Aboriginal, while female victims between the ages of 13 and 18 were twice as likely to be Aboriginal.

Among other troubling findings of Too Many Victims is the fact that one-quarter of the reported incidents that occurred in care placements were perpetrated by the child or youth’s foster parent – representing a massive breach of trust for these children. More than one-third of sexualized violence incidents that occurred in care settings were perpetrated by another child or youth in the same placement as the victim. And nearly 20 per cent of the children and youth in the review harmed themselves or attempted suicide, usually within a year of disclosing the sexualized violence.

Yet despite continued prevalence, this review finds that there is still not one specific policy or set of practice standards to guide B.C. social workers in their role as the guardian of children or youth who experience sexualized violence while in care. Consequently, actions taken by social workers in these cases are varied and inconsistent, leaving children and youth potentially at risk for further abuse and longlasting harm. The Representative finds that the underlying systems and supports required to prevent sexual victimization and to support victims are underdeveloped, underfunded and uncoordinated.

“Sexualized violence is experienced far too often by children and youth in care and we’ve known this for some time,” Turpel-Lafond said. “The question is: What are we going to do about that?

“There is much we can do to both prevent this abuse and to better support children and youth who have experienced it, so that they don’t have a life-long vulnerability to sexualized violence. Prime among the responses is to have strong Child Advocacy Centres, such as the Sheldon Kennedy Centre in Calgary. Aboriginal children and youth need these kinds of facilities, focused on their unique needs, to begin to address sexualized violence without blaming victims and further isolating them from their families, communities and caregivers.”

The report recommends that the Ministry of Public Safety and Solicitor General lead the development and implementation of a network of Child and Youth Advocacy Centres in B.C., with the first phase being the establishment of several CYACs serving Aboriginal children and youth and their communities.

The Representative also calls for MCFD to ensure that adequate policy, standards and training are provided to social workers and others working with this population to address prevention and treatment of children and youth in care with regard to sexualized violence, with a particular focus on Aboriginal girls.

Be the first to comment on "New report: Hundreds of BC foster children are victims of sexualized violence"