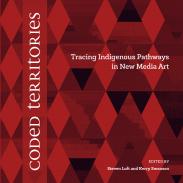 Coded Territories: Tracing Indigenous Pathways in New Media Art is an exciting collection of essays that provides a historical and contemporary context for Indigenous new media arts practice in Canada. The writers are established artists, scholars, and curators who cover thematic concepts and underlying approaches to new media from a distinctly Indigenous perspective. Through discourse and narrative analysis, the writers discuss a number of topics ranging from how Indigenous worldviews inform new media arts practice to Aboriginal videogame design to the spiritual potential of the World Wide Web.

It is a very current topic and a very cool book that is guaranteed to promote conversation and controversy about the way technology impacts art, life, spirituality and every day activities. Contributors include: Archer Pechawis, Jackson 2Bears, Jason Edward Lewis, Steven Foster, Candice Hopkins, and Cheryl L’Hirondelle.

Coded Territories is not a book that you’d read in one sitting; rather you would visit and revisit its pages, finding something new with each visit. It offers food for thought about the representation of Indigenous traditions, culture and languages in the new forms of media that have become commonplace in today’s society. It looks at how the sacred stories of the past can be told using the most up to date tools of technology.

Coded Territories: Tracing Indigenous Pathways in New Media Art is a fresh and evocative read – not so much for the solutions it might (or might not) offer but for the wonderful philosophical questions that it poses.

Jackson 2Bears offers an enlightening take on the Mother Goose song Ten Little Indians. He wonders if it is “an innocent piece of music meant to help children learn to count or an insidious and deeply racist song representative of the general perception of Native peoples as generic and stereotypical archetypes?” He discusses his journey of remixing and re-informing the ditty by sampling different media fragments, layering them with hip hop breaks and creating live audio/video montages. There is nothing generic about his approach or his performance.

In his chapter, Jason Edward Lewis writes, ” I am interested in the material qualities of the digital, how that materiality instrumentalizes a particular world-view and what we as Native people can do to subvert, revert and convert that materiality to better reflect our ways of being.”

In a later chapter, Steven Foster writes, “Not only are technologies and art forms converging but the advent of new web-based mobile platforms with multi-layered interactive approaches, including augmented reality, allow for more flexible and intuitive delivery of content. This will have a huge impact on how Indigenous peoples are represented in the media and how Indigenous media artists represent our cultures to the world.”

The collection of essays in Coded Territories is masterfully edited by Steven Loft and Kerry Swanson. Loft is a Trudeau Fellow  and was recently the National Visiting Trudeau Fellow at Ryerson University. Previously, he was the Curator-in-Residence of Indigenous Art at the National Gallery of Canada and Director/Curator of the Urban Shaman Gallery in Winnipeg.

Swanson has worked in the Indigenous media arts sector for over a decade. She is the former Executive Director of the ImageNATIVE Film + Media Arts Festival where she also worked as Director of Development and member of the programming team.

Coded Territories: Tracing Indigenous Pathways in New Media Art (isbn: 978-1-55238-706-1) was published in October 2014 by University of Calgary Press and is available at book stores, through the publisher or via on-line book vendors.