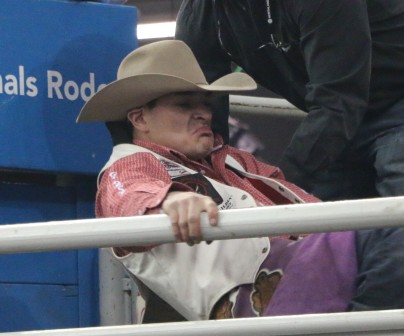 Bull riding and bronc riding never fail to draw in good-sized crowds at any given rodeo. With the passing of Ft. Vermilion’s Kenton Randle (Metis) a few years back, there has really only been one bronc rider of note from Native country to qualify and be respected at the annual Canadian Finals Rodeo (CFR). That individual is Ty Taypotat, a 23 year-old youngster from Regina, Saskatchewan. 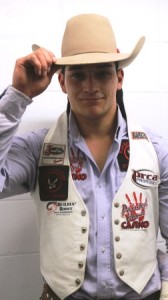 Ty Taypotat tips his hat at the Canadian Finals Rodeo. Article and photos by Terry Lusty

On opening night of the CFR, Wednesday, Nov. 5, Taypotat managed to kick out an 84.75 which stood up for first for the day while B.C.’s Logan Hodson came second and Ky Marshall split 3/4 with Manitoba’s Colin Adams.

At Saturday afternoon’s performances, Taypotat scored 81.5 but exercised his option for a re-ride and marked another 84.75 that stood up for second to veteran rider, Dusty LaValley.

That same day (Sat. has both a matinee and an evening performance), Vold kicked out a win – his second of the week – to vault him into first place going in to the final go-round on Sunday, Nov.9.

Not getting a very good draw on Sunday, Taypotat was unable to gain the extra ground he needed to upset Vold. And so, Vold won the crown. Taypotat accepted his fate, still pocketed over $20,000 to raise his season’s earnings and up his ranking from 9th to 5th. 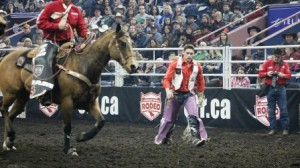 Taypotat makes his way back to the chutes after completing his ride.

In a later interview, Taypotat conceded, that “sometimes it happens (injuries and hard-luck draws); it’s part of the game.” Like a true competitor, he takes it for what it is and moves on as all must do.

But bronc riding is something he loves doing, just as he loves working on diesel trucks in his spare time. One of his sponsors allows him to tinker around with trucks at his diesel shop.

And when he’s not competing at a rodeo, Taypotat can be found working in the oilpatch out of Weyburn. It’s no wonder “he’s got one of the strongest arms in the (rodeo) business,” according to several rodeo announcers.

Speaking of rodeo, “I was born into it,” explains Taypotat. Yes, it runs in the family. His dad, and his dad before him, both competed. “Mainly in calf-roping, what they now refer to as tie-down roping,” he added.

Taypotat’s dad also rode bucking horses. He credits his dad with “everything I know – it all goes to him. Thanks to him I’m where I’m at. I never went to rodeo school.” No, Taypotat learned it all through practical experience and, of course, his father’s guidance.

Until he caught onto it, “dad made me ride a spur board,” he said. Eventually, he found himself competing on the Indian rodeo circuit, including the INFR (Indian National Finals Rodeo) in New Mexico. In addition, he competed in the IIFR (International Indian Finals Rodeo).

“I’ve been there four times,” he professed, “and was the Indian world champion through the IIFR.”

When pressed further, Taypotat admitted that the CFR is his favourite rodeo and he’d really like to win the national title. But, then, who wouldn’t? He’s now had a few shots at it – in 2011, 2012 and now, this year. Still, the crown eludes him. Be that as it may, one never knows. From one year to the next, anything can happen. Ask any of the boys, they’ll tell you.

Besides, Taypotat believes in himself and he likes to offer that bit of philosophy to young aspiring Aboriginal competitors, especially those who dream of grabbing that brass ring.

“Always believe in yourself. What you believe in, you can achieve. You’ve got to believe, never doubt yourself.”

This philosophy has served Taypotat well in his career and it is sure to take him to the next level. Now go get ’em buckaroo!

Be the first to comment on "He’s an Indian cowboy at the Canadian Finals Rodeo . . . ."