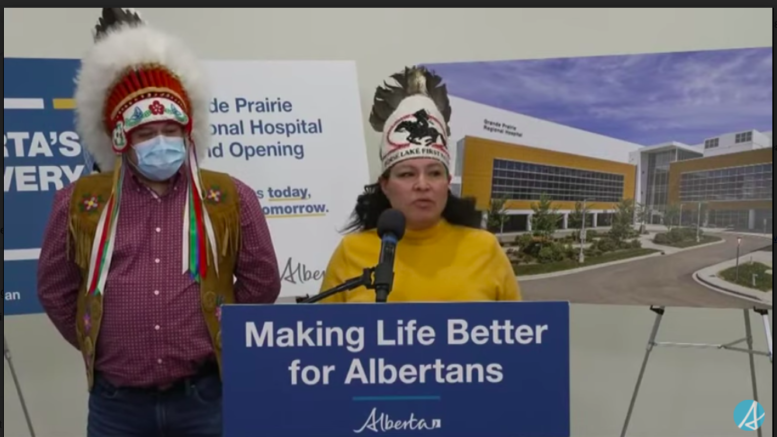 (ANNews) – After an opening prayer from the honourable Metis Elder Angie Crerar, Alberta Premier Jason Kenney thanked her for the “beautiful prayer to our Creator” and he added a “prayer for peace for the people of Ukraine at this time of great adversity” before announcing the Official Grand Opening of Grande Prairie Regional Hospital.

The Premier of Alberta was joined by Chief Ramona Horseman, Horse Lake First Nation and Treaty 8 Grand Chief of Economic Development, Chief Isaac Laboucan-Avirom of Woodland Cree First Nation, and many other dignitaries on Feb. 26 to declare the new hospital officially open.

The facility serves the entire region with a full-service emergency department, 243 single-bed in-patient rooms including a 28-bed mental health unit, plus two radiation vaults to treat cancer patients who previously had to drive to Edmonton for radiation therapy.

In addition to acute care, among other services, Indigenous people can expect improvement in Mental Health, Dialysis Treatment, and Access to local Cancer Treatment. Leaders stressed that the hospital will be a truly safe and welcoming to Indigenous people.

“Culturally speaking, how fitting it is that the hospital opens in the year of the Bear [of the Cree Zodiac Calendar]. The colour of the bear [called “Maskwacis” in Cree] for our people is orange… How fitting that is for the Indian residential school survivors,” said Chief Ramona Horseman, Horse Lake First Nation. Survivors who continue to face atrocities related to the recent discoveries of children’s remains near residential schools.

Chief Horseman added, “So, I want to make sure that it’s never forgotten; it’s something very heartfelt for our people and part of healing, which is health,” which brings us here today.

“This new hospital is in the heart of Treaty No. 8 territory in which the city of Grande Prairie resides. First Nations, Inuit and Métis are pleased to do the ongoing work with our neighbours to provide culturally safe services, not only to our people but to those who have chosen to live here and be a part of Horse Lake’s culturally rich territory. This hospital serves as a soft start to building a foundation of trust for the future,” said Chief Horseman.

“We are in a time of uncertainty, there is a war across the ocean, and in a time of Covid-19, it’s a honour to be in this structure that’s going to provide health and care for future generations,” said Treaty 8 Grand Chief of Economic Development, Chief Isaac Laboucan-Avirom of Woodland Cree First Nation.

Chief Laboucan- Avirom said it was great to be at the Provincial budgeting meeting and to recognize that much of the province’s wealth is derived from the resources of Treaty 8 territory.  He added that he is looking forward to coexisting and continuing in shared prosperity with Alberta.

“The Hospital is a culturally safe and welcoming space for Indigenous peoples. Our objective was to make this a friendly and welcoming environment for any of our Indigenous people who come here for medical help or attention. We want our people to feel safe; they want an environment where they are respected, they are treated with dignity, and get the best health care,” said Len Auger, Grande Prairie Friendship Centre and Co-Chair of the Indigenous Engagement Committee.

There will be job opportunities for Indigenous health workers, and this is already taking place, added Auger.

“We have been working with our Indigenous stake holders. When I say stakeholders, I am talking about many of our First Nation communities in Northern Alberta in Treaty 8. We had the involvement of 32 First Nation organizations.

“Indigenous ceremony and culture were incorporated in the day-to-day functions of this hospital. Part of one of the activities was a pipe ceremony to bless the hospital.”

The site includes three court yards. One is designated as an Indigenous Courtyard and also a garden where traditional medicine will be grown on the garden wall. Plans are underway to create an Indigenous cultural space for prayers and ceremonies at the site, part of ongoing work to ensure the hospital provides culturally safe care for all. A teepee and Métis Red River cart will be placed in one of the courtyard areas.

Auger thanked Grande Prairie Hospital Senior Operating Officer Stacy Greening for her commitment to Indigenous communities, as well as many of the other people who worked to make this day possible.

“We all waited a long time for this moment, and have been through many challenges on the journey, but your patience has paid off as we celebrate this amazing and technologically advanced hospital in Alberta,” said Premier Kenney. “Congratulations to Grande Prairie and the dedicated health-care workers on this state-of-the-art facility that will serve northern Alberta far into the future. This project is part of Alberta’s Recovery Plan and boosts the health and economic vitality of rural and remote communities.”

The Hospital will make life much easier for Northern people who require cancer treatment. The state-of-the-art cancer centre with two radiation vaults, making Grande Prairie the fifth centre in Alberta – and the first in the north – to offer radiation therapy. Each year, the cancer centre expects 7,500 general visits (up 1,320), 3,500 chemotherapy visits (up 821) and 3,500 radiation therapy visits (all new).

He added, this is a fantastic resource not only for Grande Prairie but also for the entire region, serving many northern Albertans.

“Public infrastructure projects like this technologically advanced new hospital are an important part of Alberta’s economy. More than 400 people worked on site every day at the height of construction activity, bolstering businesses, contractors, and families. Alberta Infrastructure is happy to have played a role in seeing this project completed,” said Prasad Panda, Minister of Infrastructure

“This new hospital increases health-care capacity and will provide care for residents in Grande Prairie and region for years to come,” said Travis Toews, President of Treasury Board and Minister of Finance, and MLA for Grande Prairie-Wapiti

“What a beacon of hope: a modern hospital that will look after us and our children as we grow together and build a healthy future. I have been so blessed to serve on the Hospital Foundation Capital Cabinet and now as the MLA. It is incredible to celebrate the opening of the new hospital with all in our community who have supported this critical project,” said Tracy Allard, MLA for Grande Prairie.

Other features of the new Grande Prairie Hospital include:

243 private in-patient rooms, 62 more than the QEII Hospital. These include a new 28-bed mental health unit and nine mental health beds dedicated to children and youth.

11 operating rooms, five more than the QEII Hospital, including one dedicated obstetrical operating room for C-sections in the maternity unit and two operating rooms supported by the Alberta Surgical Initiative to drive down surgical wait times.

Indigenous Artists from Treaty 8 Territory are featured within the hospital such as Lance Cardinal and Walter Whiter.

New positions for the hospital will be posted at www.ahs.ca/careers. Recruitment and training is ongoing throughout the commissioning process.