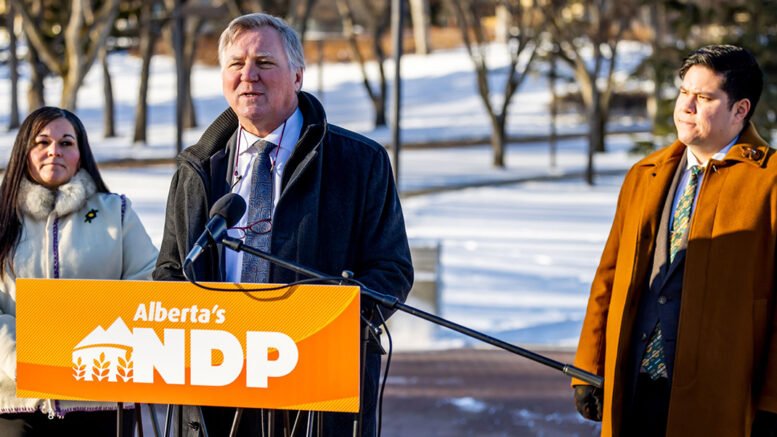 The legislation, also known as Bill 1, was passed in the early hours of Dec. 8. It gives the provincial government authority to ignore federal laws it deems to be in violation of the Canadian Charter of Rights and Freedoms or provincial jurisdiction.

Chief Tony Alexis of Alexis Nakota Sioux Nation in Treaty 6 told the Calgary Herald the legislation is “alarmingly open for interpretation, it is too uncertain and its impacts potentially too harmful and widespread.”

Multiple First Nations leaders have said they weren’t consulted in any capacity on the bill.

Richard Feehan, the NDP’s Indigenous relations critic, told Alberta Native News the fact that the UCP government didn’t consult with any Indigenous leaders before drafting the legislation is a “fairly clear violation of the duty to consult on behalf of the Crown, because [Bill 1] clearly affects Treaty rights.”

Despite Sec. 2(C) of the Bill saying it will not violate Treaty rights, Feehan said the “rest of the bill goes on to do exactly that.”

“It’s like when somebody says to you, ‘I don’t mean to be insulting, but you’re kind of ugly.’ Saying this is not what you think it is, and then doing it does not change the nature of the assault,” he said.

But it’s not just a lack of consultation that makes the bill illegitimate from an Indigenous relations perspective, “it’s the issue of all of the work that’s been done over 100 years by First Nations to protect their control over their sovereign land — over the air, land and water,” Feehan added.

Treaty agreements were made with the Crown, which is represented by the federal government, so Bill 1 subjects these rights to interference from another level of government, he said.

“You’ve made all of your contractual arrangements with the Crown through the Treaties and all the subsequent enactments of that, and all the many hundreds of court cases that have helped to define what it means and where it applies,” Feehan said.

“All of that now is suspect from the provincial government’s point of view. And so that’s literally 100 years worth of work by the First Nations that has now been brought into question.”

Responding to widespread criticism of the legislation, the Smith government partially backtracked, amending the act to remove expanded law-making powers it gave to the cabinet, which would have allowed it to subvert the legislature.

“The changes are just inadequate, and they don’t address any of the concerns of First Nations people,” Feehan said. “They weren’t even intended to.”

Arcand-Paul, who’s running for the party in Edmonton-West Henday, said the UCP’s lack of consultation with First Nations was “either done through incompetence or malice.”

“Either way, it’s clear that they do not respect First Nations or value the inherent rights that we hold,” he said, warning of a costly judicial review process, which will force Indigenous peoples “to choose between essential programming or their legal bills.”

“Danielle Smith and [Indigenous Relations Minister] Rick Wilson are ramming this bill down our throats. This is not reconciliation,” Arcand-Paul added.

Calahoo Stonehouse highlighted the economic consequences of Bill 1, which she said will impact Albertans and First Nations alike.

“If you have a provincial government fighting with the federal government, who is not including our First Nations, with a lot of disrespect within, it will not be easy to bring investment to Alberta,” Calahoo Stonehouse said. “It will hurt the economic fabric of our commerce in all regions of our province.”

Calahoo Stonehouse said Premier Smith’s “willingness to wipe out, ignore and desecrate Indigenous rights for her political fortune should terrify each one of us.”