Willow Auger’s friends and family know that she is a great kid and her school knows it too. But what an honour it was for her to receive a Great Kids Award from her province.  Every year, the Government of Alberta presents the Great Kids Awards to Alberta’s children and youth for their exceptional achievements, which inspire other Albertans to reach their potential.

Willow is a grade 8 student from Mistassiniy School in Wabasca-Desmarais, from the Northlands School Division no. 61. She was one of 16 recipients honoured with the Great Kids Award at the Fantasyland Hotel in Edmonton on April 27th. And she is very deserving of the award. 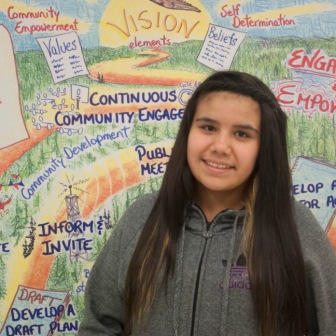 “When I received the call that I won a Great Kids Award, my smile kept getting bigger and bigger,” said Willow. “My mom gave me a huge hug and said she was very proud of me.”

The award recognizes children and youth who demonstrate strong determination, generosity and compassion. Willow, who was endorsed by teachers for helping others, demonstrating quality leadership skills and good sportsmanship says she was surprised just to be nominated.

“My Vice-Principal (Christy Jellet) asked me to bring home a note to my Grandma after school,” Willow said. “I was under the impression that Grandma was making a donation to the school but she told me two months later that I was nominated for the Great Kids Award.”

Willow is involved in a number of sports such as Volleyball, Basketball and Badminton; she is also involved in an after school program called Izzy’s Attic. The group meets on a weekly basis to organize activities and help promote safe and caring schools. Willow believes the after school group has helped her to achieve the Great Kids Award.

“Izzy’s Attic helped me realize that I’m more helpful to others than to myself,” said Willow. “I can be pretty hard on myself.”
Along with winning a Great Kids Award, Willow was presented a trophy, attraction passes for West Edmonton Mall, a gift from IBM and a one night stay at the Fantasyland Hotel with family members!