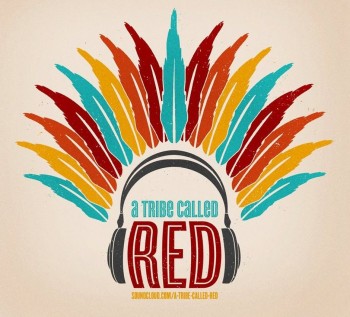 When powwow vocals and drumming fuse with high energy electronica the result is a frolicking good time and when you add to the mix just the right amount of reggae, hip hop and social activism, you get the sensational 2014 Juno Award winning Breakthrough Group of the Year – A Tribe Called Red. And lucky for us, A Tribe Called Red will be gracing our province this summer with three amazing appearances.  The first show will be at the Banff Centre on July 1, the second will be as part of the internationally renowned Calgary Folk Music Festival located at the beautiful Prince’s Island Park in Calgary on July 25 and the third will be at the Starlight Room in Edmonton on July 27.

A Tribe Called Red is made up of band members: two time Canadian DMC Champion DJ Shub, Deejay NDN and DJ Bear Witness. To learn more about them and hear samples of their music, visit http://atribecalledred.com. The group made history this spring when they won a prestigious Juno Award that until now has been presented to mainstream musicians, not those vying for recognition in the Aboriginal music categories. 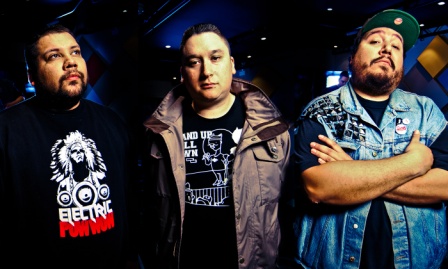 The award winning group A Tribe Called Red will be on the main stage at the Calgary Folk Music Festival on July 25.

“It was shock; it was excitement; it is proof that anything is possible,” noted band spokesman Ian DJ NDN Campeau, shortly after being named Breakthrough Group of the Year at the 2014 Juno Awards, held in Winnipeg, Manitoba from March 24-30.

“This award doesn’t belong to us; it belongs to all of us,” he said, referring to Aboriginal groups across the continent. “This moment right here is a perfect example that Aboriginal youth can excel and achieve any goal that they could ever want. Anything is possible. They can do whatever they want and we are proof of that.”

The Ottawa-based group told media that they’d made a conscious choice not to submit their latest album in the Aboriginal Album of the Year category, choosing instead to compete against the many mainstream contenders vying for awards at the annual music gala. In an interview with the Ottawa Citizen in February, Campeau made it clear that he wanted to compete against artists in the same genre, not of the same race.

“”In one category you’d have the George Leach album, a really good alternative rock album, and then our album, an electronic album, to compete for the same award just because we’re of the same race,” he said during that interview. “I’d rather be in a category with music of the same genre than to be nominated because of race. We just felt we wanted to compete for an award because of our music and not our ethnicity. Our album is an electronic album and we’d be up against someone like George Leach who has a rock album. You can’t say one album is better than the other because they’re completely different genres.”

Lillooet, B.C.’s George Leach went on the win the Aboriginal Album of the Year. His publicist, Kim Wheeler, noted that “this is an exciting time for Aboriginal music,” adding that “overall this year’s Juno Awards felt like a breakthrough year for Aboriginal artists in general.”

A Tribe called Red’s overall goal and lifelong dream, noted Campeau, has been partially realized, now all that remains now is to have music lovers everywhere get on board to a better understanding that music is music, no matter who the players or singers are.

“The dialogue needs to start happening, and I find that our popularity is a really good doorway to have that conversation,” he said. “It’s definitely starting – and that’s great!”

A Tribe Called Red lost out in the Electronic Album category when it was announced a day earlier that Halifax DJ Ryan Hemsworth was the winner, but on Sunday, the final day of the gala, and during the telecast of the Breakthrough Group of the Year category, they took home an award that had never before been presented to an Indigenous group vying for a win in one of the Juno’s prestigious categories not tagged within the “Aboriginal” category.

Aboriginal entertainers and the Juno awards came together back in 1992 when Cree singer, songwriter Buffy Saint-Marie helped to establish a new category to showcase Aboriginal musicians. She won two different awards in that new category “Music of Aboriginal Canada” before being inducted into the Juno Hall of Fame in 1995.

Stepping out to seek an award that isn’t indicative of race is a new venture for A Tribe Called Red, but it is one that they intend to pursue in years to come. Campeau said that for Aboriginal musicians to enter in an Aboriginal category “is kind of a doubled-edged sword. It does give a really good platform for a lot of emerging artists who don’t necessarily have those connections or whatnot to get to that level, and it’s good for the music industry to see these talented people and be showcased like that.”

When it comes to this year’s award, he noted, “it’s good proof that we don’t have to be stuck anywhere, we can be mainstream. For A Tribe Called Red winning is 100 percent proof that you can do whatever you want as First Nation people in Canada now, and whatever goal that they make for themselves is completely attainable, so aim high when you are making these goals.”

In a recent interview with Muskrat Magazine, Bear Witness noted that “we did this for our community, we did this for Indigenous people and to create something within pop culture that represented and reflected us.”

Asked how the band felt and what his first thoughts were after hearing they’d won the award, Bear Witness replied: “To be honest, I knew a couple milliseconds before. We had been hanging out with The Sadies backstage before, and they were really pulling for us to win. So as soon as they opened the envelope and I saw the look in their eyes, I kind of knew what was coming. It was still a huge surprise – it was definitely a shock. The real excitement of that moment was knowing what it means to everybody, not just to our group.”

Asked how and why the group decided to step outside the Aboriginal category, Bear Witness replied: “It was time for it. We felt that we had the opportunity now to compete in the mainstream. We don’t have anything against the Aboriginal Award, and we definitely don’t want to take anything away from that award. But we felt that we had the opportunity to win an award outside of just our nationalities, outside of being judged based on our backgrounds.”

He also said that he fully supports the Aboriginal category at the annual Juno’s.

“I don’t have a problem with the category necessarily, but I think we need to see people winning outside of the category as well. That has happened, we’re not the first people to win outside of the Indigenous category, but it’s definitely something that has a tendency to keep people there. As Indigenous artists we need to be measured with everybody else, you know, not just with each other.”

A Tribe Called Red blends instrumental hip hop, reggae, moombahton and dubstep-influenced dance music with elements of First Nations music, particularly vocal chanting and drumming. After releasing a number of tracks online and DJing at various dance and Aboriginal events, the band released their self-titled debut album as a free internet download in 2012. The album was named as a longlisted nominee for the Polaris Music Prize  in 2012.

Founded in 1980 as part of a celebration of Alberta’s 75th anniversary, and held at Prince’s Island Park since its inception, the Calgary Folk Music Festival (organized by the not-for-profit Folk Festival Society of Calgary) has grown from a locally based one-day event to four-day extravaganza with a national and international profile and a broad, cutting-edge programming vision.

The annual Festival is a four-day family-friendly cultural and musical jamboree at the bucolic Prince’s Island Park that celebrates over 70 artists from Alberta, Canada and the world on 6 daytime and 2 evening stages and in concerts and sessions – unpredictable, magical curated mash-ups where artists share songs and stories and collaborate. It is a must-attend event for music and event lovers; an essential community gathering for 53,000 Calgarians and tourists. For tickets and information visit http://www.calgaryfolkfest.com.

Be the first to comment on "Don’t miss: A Tribe Called Red coming to Alberta this Summer"