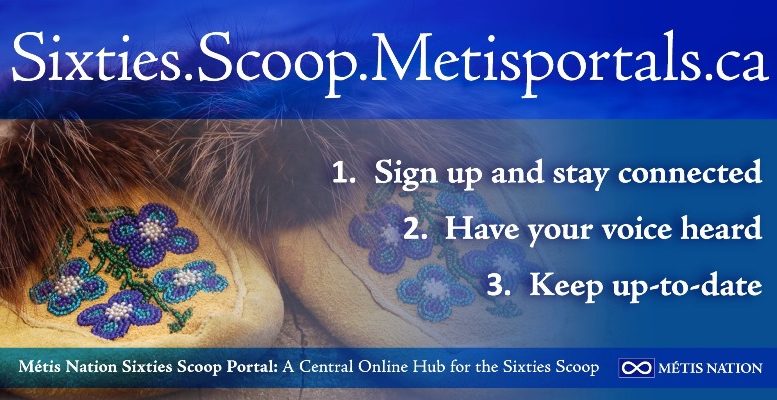 Winnipeg, MB – On January 2, 2019,  at the Manitoba Metis Federation Home Office in Winnipeg, Métis National Council Minister of Social Development, David Chartrand, launched the Métis Nation Sixties Scoop Portal. This new, online platform will support the information needs of the Métis Nation related to the Sixties Scoop. The Portal can be accessed at Sixties.Scoop.Metisportals.ca.

The “Sixties Scoop” is a term used to describe a child welfare policy, developed and implemented starting as early as 1951, that involved apprehending Indigenous children from their birth families and placing them in middle-class, Euro-Canadian homes hundreds or thousands of miles away from the children’s communities. The Government of Canada and the Métis National Council have agreed to work collaboratively, Nation-to-Nation, to develop a process to address the legacy of the Sixties Scoop. This process will be informed and guided by Métis Survivors. As first steps in this process, the Métis Nation is documenting the stories of Métis Survivors who were taken from their homes and families during the Sixties Scoop, and gathering Métis Survivors’ contact information to ensure that the Métis Government can remain in contact with Survivors regarding any new developments and initiatives.

“Reconciliation of our Sixties Scoop Survivors is paramount,” said Chartrand. “It is our responsibility, as the Métis Government, to right the wrongs that Métis Survivors suffered while enduring this cultural genocide. Going forward, we seek justice. We seek to correct and rectify the legacy of this dark chapter in Canada’s history. We will not fail Métis Survivors.”

The Application Deadline for the Sixties Scoop Class Action is August 30, 2019