OTTAWA, June 1, 2015 /CNW/ – The Métis Nation, represented by the Métis National Council (MNC), is gravely disappointed that after six years of interventions to the Truth and Reconciliation Commission (TRC), it was not invited to participate in any way in this, the final public, national event.

In previous years, the Métis Nation was invited to participate in the Grand Entries, and beginning with the Second National Event held in Inuvik, was also invited to speak at the opening ceremonies, as it was for the following ones in Montreal, Vancouver and Saskatoon. However, while invited to the Final National Event in Edmonton in March 2014, no opportunity to speak was provided.

Without explanation or notification, the Métis Nation did not receive an invitation nor information on this closing event. After having suffered exclusion from the Indian Residential Schools Settlement Agreement, the Prime Minister’s 2008 apology and the mandate of the TRC itself, this final act of exclusion will have profound and negative effects on the aspirations of reconciliation between all Aboriginal peoples and the rest of Canada. 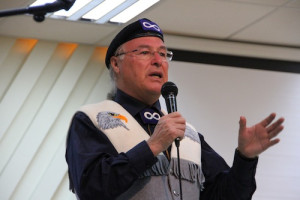 “For an Aboriginal people who have experienced decades of marginalization, many of whom attended Métis residential or boarding schools, this latest exclusion is inexcusable and demoralizing” stated Métis Nation President, Clément Chartier.”On a personal note, for ten long years I attended the Ile a la Crosse Métis boarding school, one of the oldest such residential schools in Canada where many of us suffered psychological, physical, cultural, emotional and yes, sexual abuse at the hands of the servants of the Catholic Church”.

President Chartier called on the TRC to at least address the exclusion of the Métis residential schools in their final report to be released tomorrow and call upon Canada to embark on a similar course of action for Métis as it has done for Indian residential schools.

The MNC represents the Métis Nation in Canada at the national and international levels. The Métis Nation’s homeland includes the 3 Prairie Provinces and extends into Ontario, British Columbia, the Northwest Territories and the northern United States. There are approximately 350,000 – 400,000 Métis Nation citizens in Canada, roughly a quarter of all Aboriginal peoples in the country.