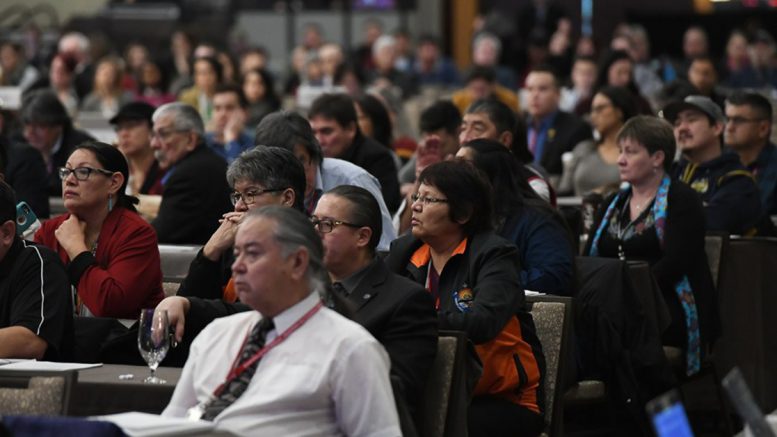 (November 16, 2018) – Several Alberta Treaty Chiefs oppose and reject the federal government’s Indigenous Rights Framework. The Alberta Treaty Chiefs join other organizations advocating on behalf of their leadership and citizens, such as the Anishnabek Nation leadership, the Association of Iroquois and Allied Indians (AIAI), who reject the framework and all of its associated processes.

At an Alberta Assembly of Treaty Chiefs meeting many Treaty Nations have stated their opposition to Canada’s proposed Indigenous Rights and Recognition Framework Legislation.

Several Treaty Chiefs have sent letters to Prime Minister Justin Trudeau to ensure that the positions of Treaty Nations is on record regarding rejection of Canada’s Proposed Indigenous Rights Recognition and Implementation Framework.  The letters are in response to Minister Carolyn Bennett’s public message, “No stopping the framework, says Minister Bennett, but she’s listening (October 29, 2018).”

“The First Nations have made it known publicly and in writing that Canada’s aggressive agenda to expedite plans to create legislation designed to deny our rights to lands and resources have been done all without our Free Prior and Informed Consent (FPIC).  This does not bring Honour to the Crown,” stated Chief Craig Makinaw.

“Our sacred treaty matters were not addressed – instead the Minister in July of 2018 sent out a form letter that completely mischaracterized the process and did not include one word on the treaty issues raised in our letter. Onion Lake was not the only Nation to send a letter against the process.  Canada has chosen to ignore those letters resorting to fabrications,” stated Okimaw Henry Lewis.

There was an expedited engagement period for the Framework process, and the results contained in the roll-up documents were selective in nature, supporting only Canada’s pre-determined positions and goals and were dispensed only at federally pre-selected and managed meetings, and not released to our Nations.

Chief Kurt Burnstick has stated:  “As Treaty Peoples, Canada always must bring the honour of the Crown into dealings with our Nations. The present process is full of sharp dealings that bring no honour to either the Crown or the state of Canada.”

“The Framework is in direct conflict with our Treaty, inherent rights and title.   The process does not recognize nor respect our jurisdiction,” stated Chief Tony Alexis.

“It is clear for our First Nations that continuing with this process will result in a major set-back for the renewal of the relationship between Canada and Treaty First Nations,” stated Chief Billy Morin.

“In light of the deteriorating situation in Canada, the Treaty Peoples have tried many ways to open a dialogue with Canada. We have written letters and provided materials to Canada without any formal response.  For the sake of our Peoples’ and our children’s children, we must collectively find a path to advance and implement the Treaty made with the British Crown,” stated Chief Eddy Makokis.

“The Anishinabek Nation leadership have unanimously rejected and oppose any future development of Canada’s Indigenous Rights Framework,” says Anishinabek Nation Grand Council Chief Glen Hare. “Something as crucial as this should not be subject to timelines. We are always dealing with last minute compliance from Canada.”

The implementation of the Indigenous Rights Framework will further entrench infringements of First Nation jurisdiction by the federal government through empowerment of Section 35 of the Canadian Constitution.

The Indigenous Rights Framework is separate and apart from the fulfillment of treaty obligations of the federal government.

“There has been no evidence of a partnership approach and no nation-to-nation discussions,” adds Grand Council Chief Hare. “Once again, we’re being left in the dark and out of conversations that we need to be a part of, especially because it directly impacts us.”