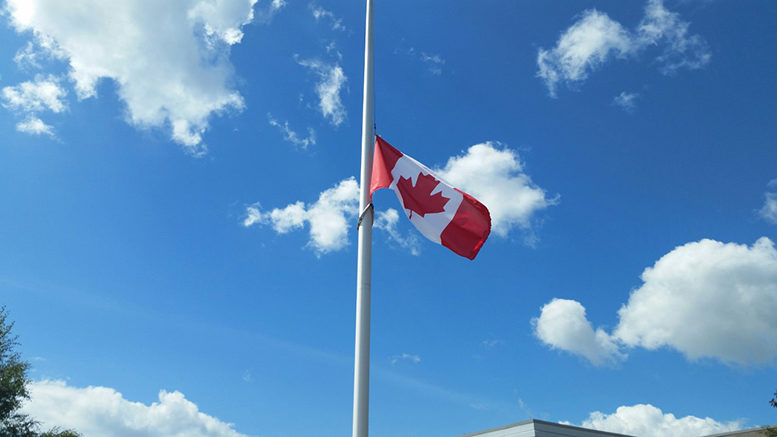 Treaty One Territory, Manitoba – The Office of the Assembly of First Nations (AFN) Manitoba Region issued this response to Erin O’Toole’s bizarre statement on the need to raise the Canadian flag back to full mast.

Since the unmarked graves of children who attended Indian Residential Schools were first discovered, flags at all federal buildings were lowered to half-mast in honour of these children and the thousands who died while attending the residential schools located across the country.

AFN Manitoba Region says there are other pressing issues during this campaign and the flag should only be raised back to full-mast in consultation with First Nations.

“The statement on August 26th by Conservative Leader Erin O’Toole expressing concern that the flying of Canadian flags at Parliament and federal buildings to honour our missing children in unmarked graves has gone on too long is an unusual priority to introduce into this campaign. In addition, Mr. O’Toole’s stated commitment to the Truth and Reconciliation Commission of Canada Calls to Action doesn’t make a complaint about flags at half-mast any less bizarre. Of all the priorities facing the country and First Nations, why on earth would a party focus on this now?

“Until impacted First Nations can finally name and lay to rest thousands of our little ones lying in unmarked graves on the sites of Indian Residential Schools, we are still grieving. At half-mast, the Canadian flag is still flying but if Mr. O’Toole and the Conservative Party of Canada are over this national tragedy, this is duly noted and message received.

Mr. O’Toole doesn’t get to decide when the country should move on, or if First Nations should get over this painful legacy of genocide in this country. Moreover, First Nations don’t appreciate being used as a wedge issue in the pursuit of power in Ottawa.

“First Nations have received an outpouring of compassion from Canadians in the wake of the findings of these unmarked graves across the country. We have a long way to go to find out who these little ones are.

“We have only just begun to organize this work, and some initial funding in support of this work has begun to flow from the current government. More pain lies ahead, more healing and more work must be undertaken, but we are determined to reclaim our little ones and treat them with the respect and care they deserve at long last.

It was a Conservative government that denied the Truth and Reconciliation Commission of Canada funding to conduct research on IRS deaths and advance this issue. Maybe we would be further ahead in finding our children and honouring them if that hadn’t happened.

“Canada will need to provide, on an ongoing basis, the resources required to reclaim and lay our children to rest. Governments have turned a blind eye and a deaf ear for years and years to this much needed support and the TRC Calls Action 71 – 76.

“There is much sensitivity and many needs to be considered and navigated, and many gaps and uncertainty in the legal framework that must be overcome for a lasting and just resolution for the former students of the Indian Residential Schools. These challenges and their underlying causes have remained in place for so long because our lost children have simply not been a priority for any government until now.

“First Nations protocol within our communities must be the guide for this work. In addition, a human rights framework needs to be applied, starting with an international human rights law principle: the right of families and communities of disappeared persons (because of government action) to know the truth.

“First Nations and the impacted families have a right to know what happened to their missing children and have the right to decide next steps respecting their final resting place. As others have said, this is obviously a situation where the standard of free prior and informed consent must apply. Each impacted First Nation will determine what their needs are, what should be done, and how consent issues must be addressed.

“Here is a question for Mr. O’Toole, and each federal party: will you follow the lead of First Nations to do what is required to correct this tragic dishonour of our children?

“The truth and children are more important than flags at half-mast or not a half-mast.”