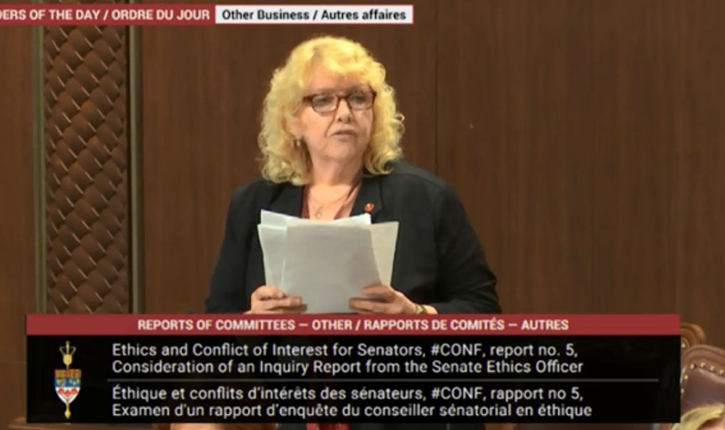 Lynn Beyak announced her retirement from the Senate amidst calls for her to be expelled from the position for her inflammatory remarks about Indigenous people and her defence of Residential Schools.

(ANNews) – Lynn Beyak, a senator who known for holding and preaching racist beliefs about Indigenous people, is resigning from the Red Chamber.

This happens just as Upper house members were considering a motion from Independent Sen. Mary Jane McCallum that sought to permanently remove Beyak from the upper house.

“A modern Senate is no place for racism to exist,” said McCallum, a residential school survivor. “Beyak’s actions have sown division in our society. By allowing her to remain in a position with the inherent title of ‘Honourable’ while such misdeeds have been appropriated is irresponsible and sets a poor example that is contrary to how Parliamentarians expect themselves and each other to act.”

Beyak is resigning, three years before her mandatory retirement date; if she were to be forcibly removed then her life-time pension would be cut.

And because she has resigned, she gets to keep her pension.

“As per the Members of Parliament Retiring Allowances Act, parliamentarians who have six or more years of pensionable service are entitled to receive a pension. Sen. Beyak will receive a pension upon retirement from the Senate,” a spokesperson for the Senate’s internal economy, budget and administration (CIBA) committee said in a statement.

“The act does not allow for a pension to be stripped in the case of a resignation.”

During her time on the senate, Beyak was suspended twice due to inflammatory and insensitive comments she made about Indigenous people. For example, in March 2017 Beyak gave a speech to the senate in which she described Residential School instructors and clergy – many of whom were abusers and molesters – as “well-intentioned.” She also condemned the Truth and Reconciliation Committee (TRC) report because it didn’t focus on the good things about Residential schools.

According to the TRC, at least 3,201 children died in Residential Schools, but the actual number is probably much closer to 6,000.

Beyak’s most daring tirade came in the form of letters posted onto her tax-payer-funded website in which she described Indigenous people as lazy, opportunistic, pampered and inept. She then refused to remove the letters at the request of then-conservative leader Andrew Scheer.

While facing suspension, Beyak apologized for her letters. However, after announcing her retirement earlier this week, she revealed in an absolute shocker which surprised no one that she was not sorry about her comments/beliefs.

Murray Sinclair, an Indigenous Senator who will be resigning at the end of January, said that the toughest obstacle towards reconciliation that he foresees are white supremacists and residential school deniers.

“The people who believe that they have the privilege of holding power and should continue to have that privilege, they’re going to push back,” says Sinclair. “They’re going to fight against reconciliation. They’re the deniers of this story. They’re going to say this never happened. That the schools were all about education and the Indians should be thankful that they got an education.”

He then reminded everyone that the Federal Conservative Party Leader, Erin O’Toole, also made headlines last year when he said that Residential Schools were only “meant to try and provide education” and then “became horrible.”

Sinclair continued, “That message is a total mess. (Residential) Schools were never about education, schools were always about forced assimilation and indoctrination, and we need to call it for what it is.”