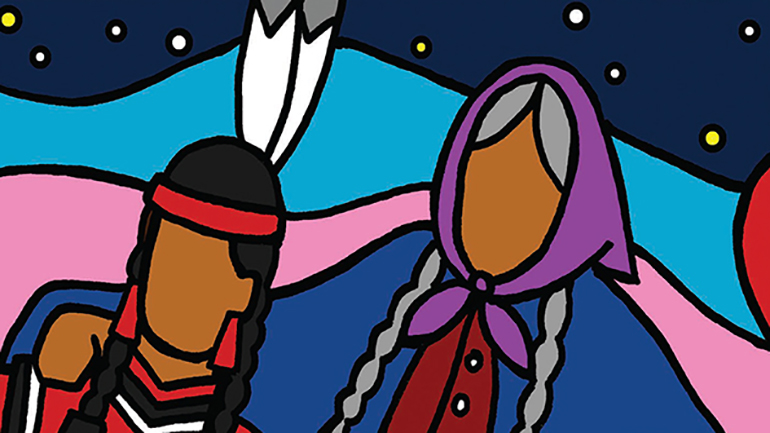 (ANNews) – The vibrant image on the cover of this month’s Alberta Native News is “Intergenerational Love” by Lance Cardinal, an acclaimed contemporary artist. It is a detail from a mural that the artist is currently painting for the Institute for the Advancement of Aboriginal Women. 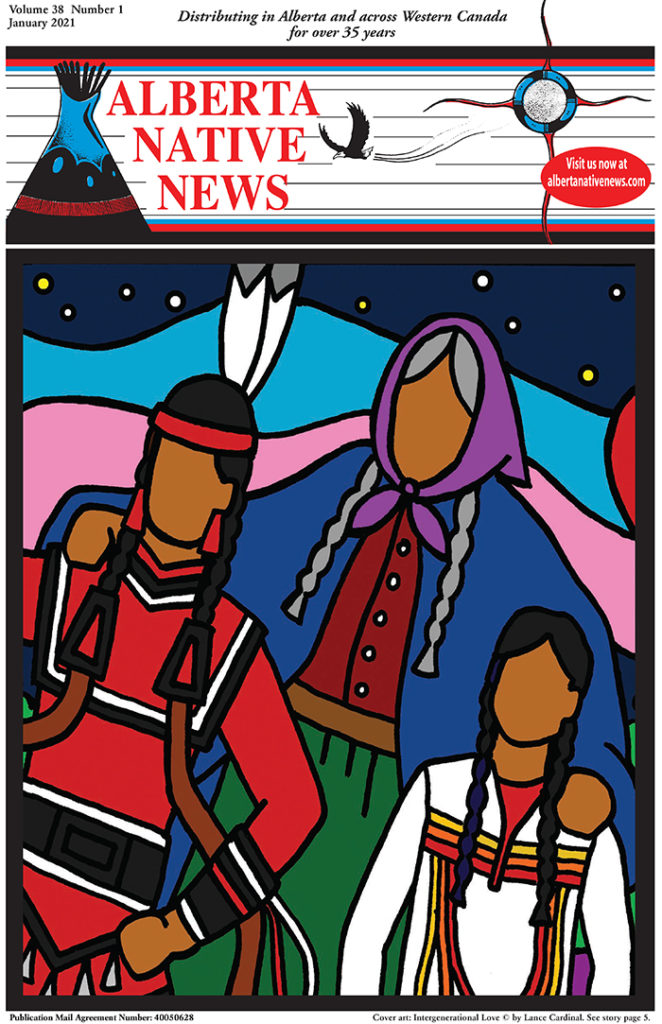 Cardinal has worked as an artist in Alberta for over 25 years and has created a large variety of artwork
in the region, including set and prop design, live performances, as well as painting, sculpture and
drawing.

He has been nominated and won multiple awards in theatre, such as the Jessie Richardson Award
for Outstanding Set Design.

Lance sat down with Alberta Native News and at the time of the interview, he was at an IKEA to support new prints of a painting by artist Erin Currie — from Montana First Nation. The
prints are selling for $20 and 100% of the proceeds go to the Bent Arrow Healing Society.

Cardinal and IKEA have been in collaboration for “the last year or two to incorporate some new
Indigenous elements into their space. (In part) to acknowledge that the land they’re on is in Treaty
6 territory.”

“This was an idea they had to bring representation and authenticity to their store and to have the
Indigenous people of Alberta see themselves in these spaces.”

In collaboration with IKEA, Cardinal created a huge, 40-foot mural that “represents the seven
sacred teachings,” earlier this year. IKEA recently debuted its first-ever indigenous showroom, which was designed by Cardinal. 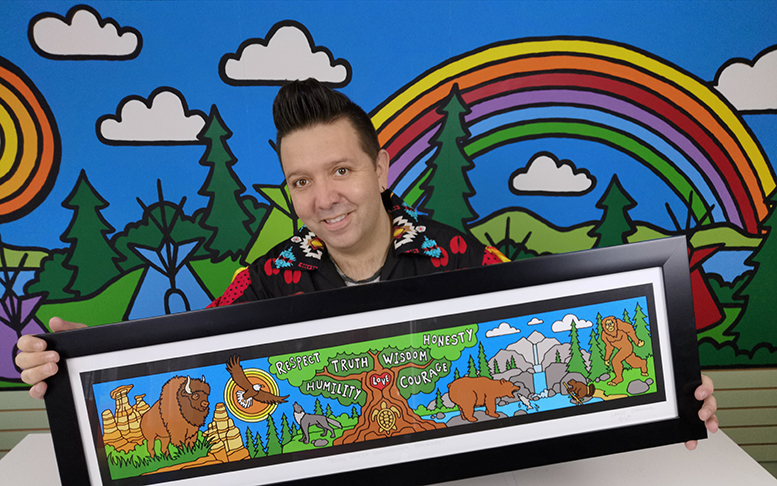 Lance Cardinal faced many obstacles on his artistic journey. He grew up on Bigstone Cree Nation, Treaty 8.

“My home community is Calling Lake, Alberta and my reserve is up near Desmarais, by Wabasca.”

“I come from a very small town – about 500 people – an Indigenous community. And I grew up there with a pretty typical Indigenous upbringing.”

Cardinal continued, “Our family, a single-mom-family, was very poor. Didn’t have much
money; didn’t have many resources then. I grew up around a lot of alcohol, a lot of
crime and those kinds of environments. So, it was a bit of a tough journey growing
up.”

“When I was growing up, I didn’t have much of a place to express who I was. I didn’t know it
then, but I realized when I was older that I was two-spirited. And there was a lot of identity
crises trying to discover who I was. I was also a mixed-blooded Indigenous person –
– I’m very light-skinned – so, I faced a lot of discrimination and stereotypes in my small town.”

Art was his escape from all the discrimination, name-calling, and bullying that he was facing.
“Creativity was my best outlet. It let me escape into a world of imagination where I could be
free. I could be important, I could be heard, and that just translated further and further into my
career.”

And there was never a plan B; “I absolutely always knew I was going to be an artist. That was
something that I wanted to do when I was growing up, something that I focused on in my high
school years, something I went to school for in my university and college years; and something
that I do full-time and have done professionally full-time for about thirty years.”

Cardinal worked as a performer at the beginning of his career and worked on stages all over
Western Canada. He then got into set design work and started his own set-building company and
ran it for fifteen years, creating pieces for the mainstages of Vancouver and winning many of the
top Vancouver set-design awards.

Then after spending time in the theatre industry he bounced back into the art world by “doing
sculpture shows in galleries all over Vancouver for a while. Showcasing my contemporary
Indigenous sculpture work.”

Pine Needle is one of his sculptures. 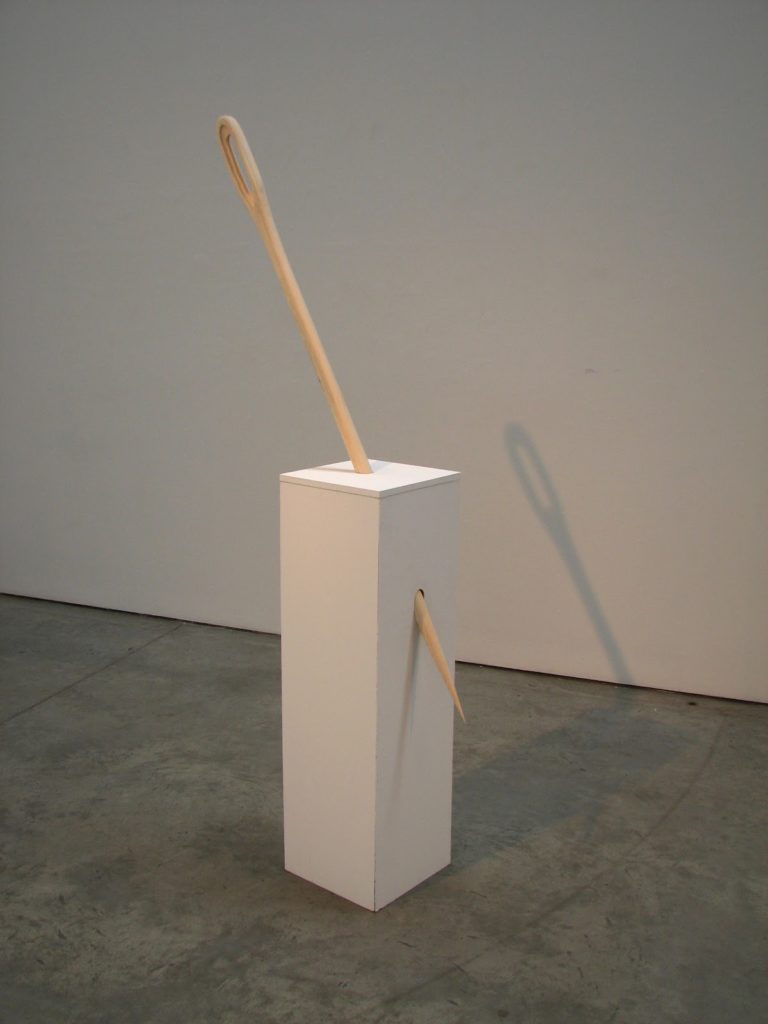 The large, hand-carved sewing needle was made out of pine wood and was placed through an
artist plinth, the white-stand common for displaying sculptures. To support the notion
that beadwork and sewing are artforms, Cardinal said he used the giant needle to represent “the
artisans in Indigenous communities. The sewers, the beaders who are under appreciated – who are
not considered artists.”

However, Cardinal felt a longing for home, “All that was great and fine, but I was living
in Vancouver away from my homeland, and felt like I needed to come home and bring all that
knowledge and experience back to Alberta and try to build the Indigenous footprint in
Edmonton. My goal now is to try to raise the recognition of our people here in Edmonton
through creativity, positivity, conversation. Really using art to tell our story, but in a very
accessible way so that all Nations can learn.”

Today, Lance Cardinal is currently hosting a children’s show that he has created, called Indigenous
Art Adventures with Lance Cardinal.

At the beginning of the pandemic, Cardinal was isolated far away from his family. With
experience in children’s workshops, he had the idea to create some children’s videos for families
to do with their children at home during isolation. What began as 12 videos produced, written,
and directed by himself, Cardinal is now in a TV studio in Edmonton doing the videos full-time.

“It’s sort of like an art tutorial video, but it also has culture in it. I teach Cree words that are
associated with the art that I’m sharing and I also talk about Indigenous artists all over Canada as part
of the teaching.”

Indigenous Art Adventures is being run through the Aboriginal Congress of Alberta
Association’s Facebook page, but you can also check out Lance’s YouTube channel “Family
Art Adventures with Lance Cardinal,” which has all the episodes available for
streaming for free.

Be the first to comment on "Feature artist for January 2021: Lance Cardinal"