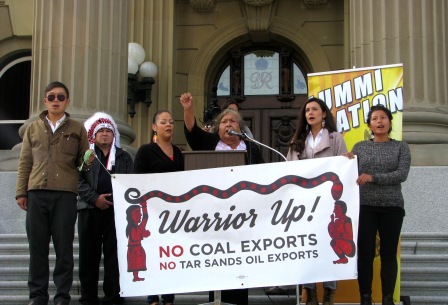 Nearly one month after leaving its home on the Lummi Nation in northwestern Washington State, a flatbed truck hauling a seven-metre (21 foot) sacred healing totem pole reached Edmonton, just one day away from its final resting place on the Beaver Lake First Nation near Lac La Biche. The West Coast-based American Indian Tribe, like many Indigenous communities in Canada, is facing a series of environmental challenges that are being introduced through industrial waste and government bodies that seem to care little for North America’s wilderness regions and the Aboriginal communities that live within them.

As U.S. energy giant Kinder Morgan makes plans to ship hundreds of tankers laden with crude oil to foreign markets via the proposed refinery in Kitimat, B.C., the Lummi Nation and other American tribes are doing what they can to bring awareness and understanding to both the Canadian and American public.

“Our two countries have similar problems in that neither government nor industry cares a hoot if our people live or die, eat or starve, maintain a healthy and sustainable community or live in a barren wasteland,” said Jewell Praying Wolf James, a spokesman who works as one of the Lummi Tribe’s House of Tears carvers. 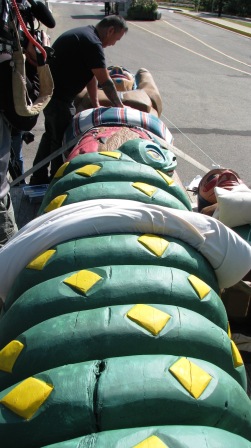 Jewell Praying Wolf James and his beautiful carved totem stopped in Edmonton for a rally at the Legislature Grounds on the way to Beaver Lake Cree Nation. Article and photos by John Copley

West Coast American Tribes and Canadian First Nation communities, concerned that government and industry leaders are substituting protocol for money-grubbing, self-serving interests, are stepping up to the plate in larger numbers than ever to thwart what they call “an impending disaster and an end to civilization as we know it today.”

During a recent stop-over in Alberta’s capital, Lummi Nation member, James called the rampant disregard by government bureaucrats and the invasive tactics utilized by industry seeking financial gain “an absolute disgrace and an attempt to push us even further into oblivion.”

Arriving in Alberta’s capital on September 5 with an entourage of supporters and fellow First Nations spokespeople, James revealed and displayed the historic totem pole as it neared the end of a 9000 kilometre journey that began in Washington and proceeded east, with stops in South Dakota, Idaho and Montana before moving on to British Columbia.

“Our final destination is just a few miles away,” noted the Lummi Nation carver, who said that “mutual support” has been ongoing “because together we face the same types” of issues.

“Kinder Morgan plans to ship 400 tanker loads of heavy crude oil each year out of the Northwest from a proposed refinery in Kitimat, British Columbia. They plan to ship heavy crude oil from Enbridge’s Northern Gateway pipeline, crude oil that would be loaded onto tankers bound for Asia. As these decisions await government approval, Gateway Pacific proposes a coal train terminal at Cherry Point, a sacred and environmentally sensitive area in Lummi Nation territory. The company, without permits, without consultation, without final approval from either federal government has already proceeded to prepare the site and in doing so has destroyed ancestral burial grounds. This has to stop.”

Jewell Praying Wolf James said that the totem pole he carved and transported is a gift that symbolizes the shared responsibility of Indigenous peoples to protect their respective communities and territories.

“We need to stand together in protest, we need to work together to create awareness, we need to stand firm to protect our homelands and we need to do what is necessary in order to get Kinder Morgan, Northern Gateway, Keystone and other proposed industrial projects to understand that we don’t just live for today; we want a future for our children. Their hopes and dreams are being jeopardized so that a few oil companies and their shareholders can get richer than they already are. It sickens me.”

Reuben George, a spokesman and co-manager of the Sacred Trust and Environmental Department for Burrard Inlet’s Tseil-Waututh Nation, said government greed and ignorance are placing Indigenous peoples in jeopardy. 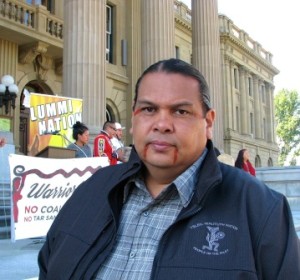 “We came to the Alberta legislature because it’s here that the Alberta government has squandered billions of dollars in royalties over the years, and has sacrificed Alberta’s environment in the process. Oil companies are squeezing and steaming oil out of the ground while using billions of taxpayer dollars in subsidies. That’s not fiscal responsibility and it’s definitely not environmental sustainability. We are here to support our brothers and sisters and this totem is an historic carving that will serve as a permanent symbol of cross-border unity among First Nations and Tribes opposing destructive fossil fuel projects.”

George lauded the supporters that greeted the sacred totem as it made its way to Alberta.

“The support has been phenomenal; I can’t express how pleased and grateful we are to see so many people understand and appreciate what Jewell James is doing to create awareness to these important environmental issues. We’ve made more than 20 different stops along the way and the response has been very positive. Now, if we can just get industry on the same page…..” 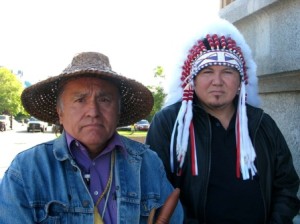 “Aboriginal people are not the only people concerned about the environmental well-being of the planet,” assured James.“We all have to be concerned because we all breathe the same air, drink the same water and have the same dreams for our children and grandchildren. This isn’t something we can put off for another day because every moment we waste has a lasting impact on the planet. Action is needed and that all begins with creating public awareness; communication is everything. First Nations and Native Americans face the same issues as every other person on this continent; you can’t drink oil, you can’t harvest on decimated soil, you can’t fish in poisoned lakes.

Over the years James has created more than 80 totem poles; several have been offered as gifts.

“We are all very excited and very grateful to have this sacred totem coming to our community,” beamed Beaver Lake Cree Nation resident, Crystal Lameman. “We are very concerned about all of these proposed pipeline projects because we are already feeling the consequences of the oil sands and the growing industrial development that propels it. We are gathered here today as a reminder that the work we do has never been about the environment versus the economy and when you make it about that then you become a part of the problem. This is a serious issue and we are concerned – like any concerned citizen we are doing our best to address what worries us.”

“Our concerns have always been and always will be about the health and longevity of our one true mother, the integrity of our people, our right to self-determination, our right to free prior and informed consent. And most of all, our right to move away from these systems of manufactured consent that have been created outside of our communities. This totem pole is reaffirmation of our ways of knowing and being. It’s a representation of the wall of resistance our people are building everywhere. Finally, it is a reminder that we are here and we are not going anywhere.” 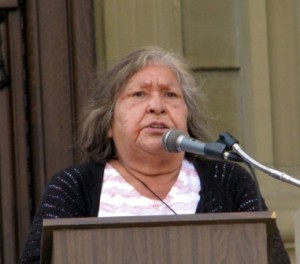 Coast Salish Elder Amy George told those who gathered at the Alberta legislature that “it is time to put away the games, the cell phones, the tablets, the wasted energy; it is time to step up and be counted. It is time to (collectively) open our eyes and work together; it is time to warrior-up. I have lived my life and I want my children to do the same; I want them to have clean water, clean soil and a healthy land to live on. Our fish are disappearing, our water is degrading, our lands are filling up with toxins and poisons and if we fail to act it will soon be too late, not just for us, but for all Canadians.”

“It is time for governments and industries to stop disrespecting our people, our communities, our way of life,” insisted Jewell James. “A healthy environment with fresh water and clean air is something we all depend on, yet it is something that too many people take for granted. We need to come together – Native Americans and Aboriginal Canadians at the same table fighting for the same rights, the same interests. Working together we can make a positive difference, we can effect positive change and God willing, we will survive yet another barrier that has been put before us.”