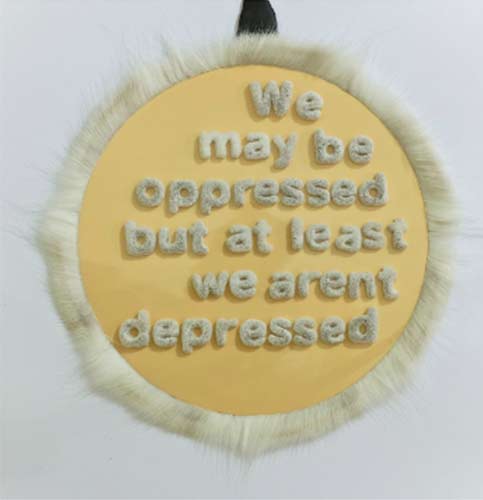 Words can be a beautiful thing, especially when they are wound up in a sentence that reflects a mood, enhances an environment, creates an atmosphere, shares an important vision or offers a simple reflection that delivers compound messages. Now that might sound complicated but you’ll discover all of this and more when you visit the RBC New Works Gallery on the second floor of the Art Gallery of Alberta (AGA). That’s where multi-disciplinary visual artist Amy Malbeuf is showcasing her latest large-scale installation, kayas-ago, a slang Cree/Michif term meaning “a long time ago.”

The series, which is comprised of caribou tufted text elements, or quotations from both well known and lesser recognized Indigenous leaders, artists and others who have inspired the artist during her career, will be available to the public until November 16th. The exhibit showcases 18 disc-shaped pieces of art, each one appearing to be magically illuminated, the medium to dark brown caribou tufts resonating rich tones and capturing the viewers’ attention with quotes and slogans meant to inspire, reminisce and reflect the words and visions of Aboriginal heroes, past and current. 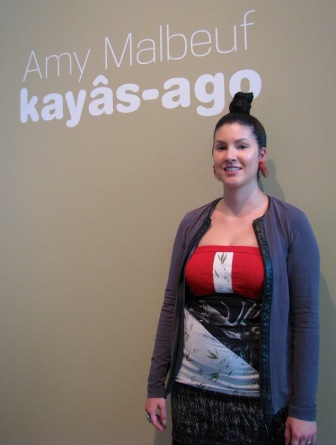 Artist Amy Malbeuf’s exhibition is being showcased in the RBC Emerging Artists room on the second floor of the Art Gallery of Alberta until November 16. Article and photos by John Copley

“The words, phrases and quotes,” explained Malbeuf, “are derived from various Indigenous people, including writers, scholars, political figures – even friends and family who have inspired me and supported me along my journey.”

Malbeuf said that she chose words with meaning, words and phrases “that have illuminated my path through life, that have guided me during difficult times; words that made me laugh and made me realize the significance of my Aboriginal heritage. kayas-ago is simultaneously a dynamic portrait of multifarious Indigenous individuals and my own self portrait.”

Her work, she explained, encases and enhances subjects that are significant to such things as race and culture, ecology, humanitarianism, performing arts and Aboriginal dignity.

Caribou tufting is a difficult and time-consuming art form that requires perseverance, a refined skill-set and a desire to create artworks that reflect the past and maintain the integrity of a traditional art form that was once unique to the northern regions. Originally an Athapascan art form, caribou tufting (and its cousin moose hair tufting) was introduced to mainstream society in the early 1900s by two Metis women from Fort Providence, Madeleine Laffeerty and Katherine Bouvier.

Amy Malbeuf, who makes her home in Rich Lake, Alberta, focuses her work on the relationships of identity, place, language, history, spirituality, and ecology. Through her artwork she examines the relationships between humanity and nature, deconstructs popular misunderstandings of Indigeneity, and explores the complicated intersections between race and culture. Her work utilizes and incorporates a variety of media including performance, installation, sculpture, caribou hair tufting, beadwork, and digital media. Malbeuf has attended many artist residencies in Canada, the United States and Australia, and has exhibited and performed throughout Canada.

With a background in contemporary performance art as well as in traditional Aboriginal arts, Malbeuf’s works explore the concept of translation from the physical to the immaterial, as an abstract and dynamic exercise in portraiture of the multifarious Indigenous people that call Canada home. She describes her handcrafted art forms as “powerful, humorous, sad, banal, profane and inspirational… a contemporary and abstract portrait reflecting the broad range of voices and perspectives of Indigenous people.” 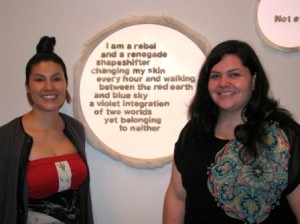 Malbeuf utilizes performance and installation to convey narratives surrounding notions of identity, place, tradition, spirituality, myth, and consumerism. In 2011, she participated in two residencies: Revolution 2012 at The Banff Centre and Emerging Indigenous Voices at Kua`aina Associates and San Francisco State University. Earlier this year she spent two weeks at the Labrador Institute Research Station in North West River as artist-in-residence, a partnership between the Labrador Institute and Grenfell Campus Art Gallery.

Malbeuf holds a BFA from Alberta College of Art and Design (2010) and a Native Cultural Arts Instructor Certificate from Lac La Biche- based Portage College (2012). She is the recipient of several awards including a recent production grant from the Aboriginal Traditional Art Forms program of the Canada Council for the Arts. Malbeuf has exhibited and performed at The Works Festival, Edmonton; Toronto Free Gallery, Toronto; Stride Gallery, Calgary; Visualeyez Festival, Edmonton; Art City Festival, Calgary; and The Other Gallery, Banff.

“Amy’s work is intrinsically beautiful and traditionally meaningful,” noted exhibit curator, Kristy Trinier. “This is the first time that Amy has shown her work at the AGA; it is a beautiful display that will give its audience a sense of belonging, a sense of understanding. The words and quotes she has incorporated to highlight the kayas-ago exhibit express not only the important connection she has to her community, but to Indigenous peoples everywhere. This exhibit is a must-see collection that incorporates words of wisdom, foretells the probable future and brings life to the words of people, past and present, that have in one way or another inspired Amy as she makes her way into the future.”

For more information about Amy Malbeuf and her beautiful creations, visit www.amymalbeuf.ca.