With support from Alberta’s Indigenous Solar Program, Louis Bull Tribe has installed solar panels on their administrative building and the Louis Bull Community Health and Wellness building. These modifications, along with future participation in the Alberta Indigenous Energy Efficiency (Retrofits) Program, should bring the building close to net zero, meaning the majority of the energy consumed will be provided by the sun.

“We took advantage of the new programs being offered by the Alberta government and applied for funding to have solar panels installed on two community buildings,” stated Louis Bull Tribe Chief Irvin Bull. “I thank the Province for coming up with the funding to help us bring these solar panels to our community to help save costs and energy.”

Funds saved from reduced utility costs will allow the Louis Bull Tribe to reinvest in other community priorities. The solar panels are expected to generate 88,000 kilowatt hours per year and will also prevent about 1,408 tonnes of greenhouse gases from entering the atmosphere. 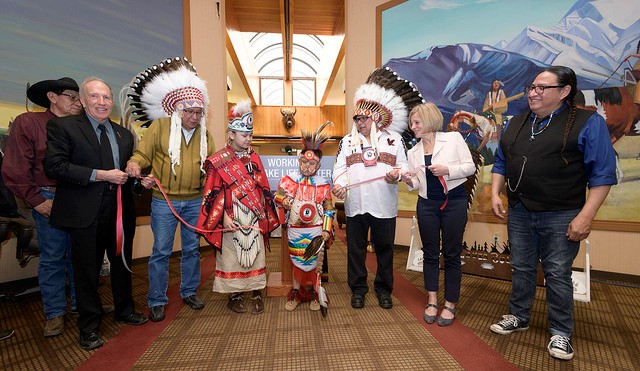 The $200,000 grant is part of $35 million in funding available in 2017-18 for Indigenous climate leadership programs that help Indigenous communities tackle climate change. These initiatives support the Alberta government’s commitment to implement the principles of the United Nations Declaration on the Rights of Indigenous Peoples.

“Indigenous communities are at the front lines of climate change and want to be part of the solution,” added Minister of Indigenous Relations Richard Feehan. “Funding through Alberta’s Indigenous Climate Leadership Initiative is helping Indigenous organizations and communities across Alberta reduce their emissions and energy bills while creating good jobs and a healthier, more diversified energy economy.”

Be the first to comment on "Louis Bull Tribe goes green"