“We are proud to support Little Red River Cree Nation, and applaud their environmental leadership,” stated Alberta Minister of Indigenous Relations Richard Feehan. “This grant will help the Nation make life better for its community and for future generations.”

Funds saved from reduced utility costs – approximately $7,000 per year – will allow Little Red River Cree Nation to reinvest in other community priorities. The solar panels are expected to generate 55.1 kilowatt hours per year. They will also prevent about 880 tonnes of greenhouse gases from entering the atmosphere, which is the equivalent of taking about 190 cars off the road. 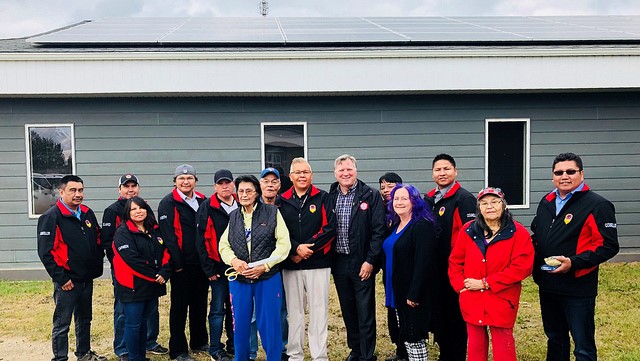 “This is an exciting opportunity for our community to invest in green energy and support our commitment to environmental stewardship,” remarked Chief Conroy Sewepagaham, Little Red River Cree Nation.

“The money we save on energy costs will also allow us to pursue other community initiatives. In addition, renewable energies, such as solar, are Treaty-friendly to our peoples for as long as the sun shines, the grass grows and the waters flow…”

The $162,168 grant is part of $35 million in funding available in 2017-18 for Indigenous climate leadership programs that help Indigenous communities respond to climate change and provide greater energy security. These initiatives support the Alberta government’s commitment to implement the principles of the United Nations Declaration on the Rights of Indigenous Peoples.