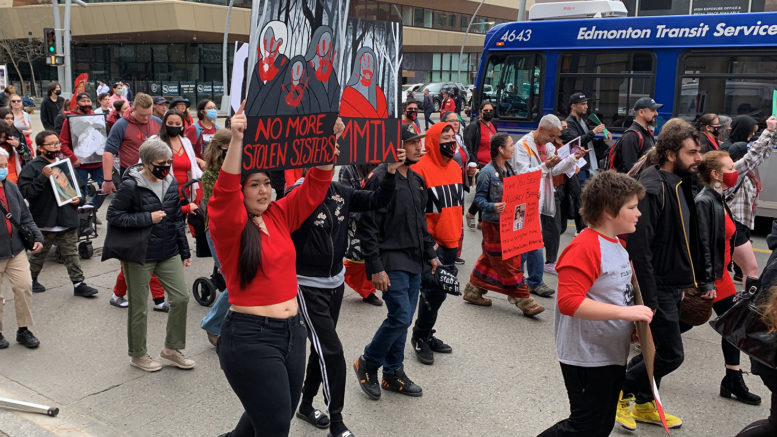 (ANNews) – Around 1,000 people marched through Edmonton’s downtown area to mark Red Dress Day on May 5.

Red Dress Day happens annually on May 5, which is The National Day of Awareness for Missing and Murdered Indigenous People. While the red dress is often recognized as a symbol to commemorate and honour missing and murdered Indigenous women and girls, Red Dress Day has grown to include missing and murdered men, boys, and Two-Spirit People. Many of the marchers who spanned for blocks along Jasper Avenue wore red, believed to be the only colour that spirits can see. Some also wore face masks featuring a red handprint, symbolizing Canada having blood on its hands from all of the missing, murdered, and exploited Indigenous peoples.

Judith Gale is a lead organizer for Red Dress Day in Edmonton, and has been since the national event started happening in the city in 2018. This year marks Edmonton’s fourth Red Dress Day – the 2020 event had to be skipped due to the COVID-19 pandemic.

The purpose of the event, Gale explains, is “to bring awareness and also strengthen the community, because we are all going through the same experience. We are able to share and realize that we’re not alone. Together we share the grief and we share the day together commemorating our loved ones.”

Gale shares in that grief. She had a 16-year-old sister who was murdered in Montreal in the early ’80s. “She laid in the morgue as a Jane Doe for three months before we found her,” says Gale, her voice cracking with emotion. “That’s why I always do this day, for my sister as well as every other family member who has experienced the great loss.”

Local group Chubby Cree sang and drummed from the back of a truck along the march route. The Crazy Indians Brotherhood provided marshals for the walk. “Members of the Edmonton Police Service walked with us, and a few members came with red shirts,” Gale adds.

The end point of the march was Amiskwaskahegan – Beaver Hills House Park, where red dresses were hung throughout. Food hampers, an open closet, meals, and tea and bannock were available thanks to the event’s many community partners which included the John Humphrey Centre for Peace and Human Rights, Tee Pee Treats, Food Not Bombs, the Stolen Sisters and Brothers Action Movement, the Edmonton Red Skirt Project, Unifor (a union that provided the face masks), and other organizations. The owner of local salon Phase Hair + Care was even there offering people in attendance haircuts and touch ups.

Family members had the chance to share stories of missing and murdered loved ones. In fact, the microphone was only available to people who were directly affected by the issue of missing, murdered, and exploited Indigenous peoples. Politicians reached out wishing to speak, but Gale turned them down. “It’s not an event about talking heads – it’s about sharing our loved ones’ stories, and honouring and remembering them for the day, in a good way.”

Gale is also the leader of Bear Clan Beaver Hills House, a mutual aid group Gale says “serves brothers and sisters living rough on the streets of Edmonton” and whose members help out at the event, which she says, is getting bigger every year.

“I have always tried to make the event about sharing and caring. It is our Remembrance Day; our commemoration of missing and murdered and exploited Indigenous peoples,” Gale explains.

“It’s all about the families, the people who didn’t get justice. Speaking the names out loud frees the spirit and is also cathartic for the living family members and community at large.”