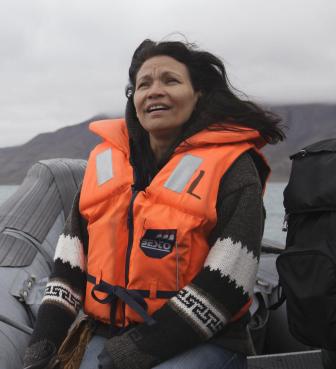 Greenpeace recently organized an expedition to the arctic to help bring awareness of the dire situation there. Conservationists say the arctic is being significantly affected by global warming and it is melting at an alarming rate. Oscar winning actress Emma Thompson and Indigenous, Gemini award winning actress Michelle Thrush boarded the Greenpeace activist ship Esperanza in early August to learn directly about the threatened, fragile arctic environment.

Also joining them were their daughters Gaia and Imajyn, both of whom are 14 years of age. The four joined a Greenpeace crew on a ten-day voyage to visit polar bear habitats, scientific research stations and the location for a major new BBC nature series. 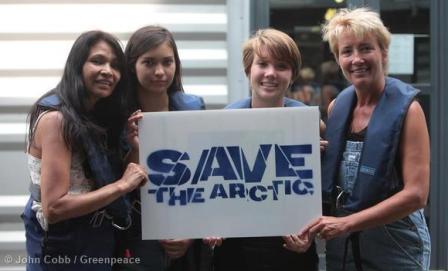 Actors Michelle Thrush and Emma Thompson join a greenpeace expedition with their daughters to learn about global warming.  Article by Brandi Morin

The trip had a profound impact on Thrush who only learned about it and jumped on board three weeks prior to the event, however she believes it was an experience that she was divinely meant to take part in.

Thrush is known for her activism in regards to the environment and said it’s time for all of humanity to wake up to the realities of what’s going on and that being able to witness and learn directly from scientists about the perils of the situation on the trip was eye-opening.

Referring to a specific glacier shown to her in a presentation Thrush said it had melted dramatically in the last 10 years.

“So many of the glaciers are melting due to global warming, “ she stressed. “The scientists have confirmed this.”

Pollution is also rampant. They were told that over 90 percent of the birds in the arctic have been found with plastics in their stomachs. There are five garbage islands that are floating around the earth and they are collecting the garbage of the world. One of them is the size of Spain and Portugal put together.

“This is what the animals  are eating. The birds have  been feeding their young  plastic. It’s heart breaking  how much human destruction has affected the land and animals.”

The crew also participated in a beach clean-up and Thrush was overwhelmed by the amount of international garbage washing up on shore. 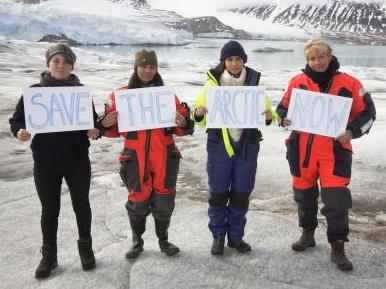 Emma Thompson and Michelle Thrush and their daughters Gaia and Imajyn, holding up signs saying ‘Save the Arctic Now’. Smeerenburg glacier on north west Spitsbergen.

“It was absolutely mind-blowing the things we were picking up. We have to be aware of what we’re doing. The over-consumption has to stop. Plastic packaging is huge as are plastic bags. I’ve made an absolute vow that I will never again use plastic bags at all.”

On one of the days Thrush was able to sneak away to be alone for a few moments on one of the islands they were docked at. Lying down on a rocky area near the beach she recalled taking in her surroundings with all of her senses and reconnected to the land. She had brought along some tobacco that had been blessed by an Elder back home and given to her. Michelle said a prayer and offered it on the land.

Upon walking back to the ship a curious encounter with nature unfolded. Four walruses appeared about 20 feet away.

“They were so adorable, popping their heads up and looking at us with their big eyes and whiskers. They flipped their flippers and it seemed like they were waving. It was really magical.”

The crew was also privileged to see a polar bear after one of their guides spotted him roaming on a nearby island. The endangered animal seemed to be enchanted by the unsuspecting visitors.

“He lay down and kind of crossed his paws like a dog would. Then he sat there looking at us and we were looking back at him. It was really beautiful.”

The bears are not as plentiful as they used to be and are threatened by extinction mostly due to global warming.

Thompson said she would be surprised to learn of people who don’t believe in global warming.

“There is no doubt left amongst the scientific community and very little amongst world leaders. If science is not enough – are you willing to take a chance on your grandchildren’s quality of life? Your call. And even if you choose to disagree with 99% of climate scientists, what’s the worst that could happen if we address global warming? We would have cleaner air and water, more equitable agriculture, more affordable and accessible energy, and life is a little better for people in developing counties and the western world. Sounds awful, doesn’t it?”

Thrush and Thompson made an immediate connection and Thrush said she felt honoured for the opportunity to join Thompson on the expedition.

“She is an absolute precious, beautiful human being who is so generous and gracious.”

One evening of the voyage saw the two actors give back to the hard-working crew members via an impromptu dinner and theatre entertainment show. Emma, an apparent talent in the kitchen, prepared dinner while the crew created a stage and transformed one of the rooms into a theatre where Thrush performed her one woman show, “Find Your Own Inner Elder.” Her daughter Imajyn performed a fancy dance to a captivated audience, many of whom had never been exposed to Aboriginal culture.

Imajyn and Gaia also developed a bond and Thrush believes their generation is much more conscious of what’s going on.

“There are so many things happening around the world right now that are heart breaking and so many things that we’ve put into their world and into their generation that they should not have to deal with. I remember when I was 14 years old I didn’t have to worry about climate change or the amount of pollution that’s happening.”

It was an enormous privilege to travel with Thrush and her daughter, said Thompson who was impressed by the natural kinship they have to the earth.

“Michelle learnt about the Earth at the knees of her tribal Elders – she was infused with wisdom from the get-go, while I was watching “The Virginian” and reading stupid magazines for girls with articles like “How to get your Man and Keep him.” I think they both had something innately connective because of that early learning and Gaia and I took a lot away from that.”

It’s time for people to stop viewing the earth as a commodity and to get back to relationship with it, Thrush declared. And it’s time to lobby governments to create a sanctuary in the arctic similar to Antarctica so that no harmful activities such as drilling are allowed.

“If they continue drilling in the arctic it will happen. There’s no doubt there will be an oil spill. They won’t be able to clean it up in time before the freeze up happens and it will have a devastating effect.”

The Esperanza ship is environmentally friendly and runs entirely on electrical energy.

For more information on the Save the Arctic campaign and to sign the petition to join the millions who believe in protecting the Arctic please go to www.savethearctic.org