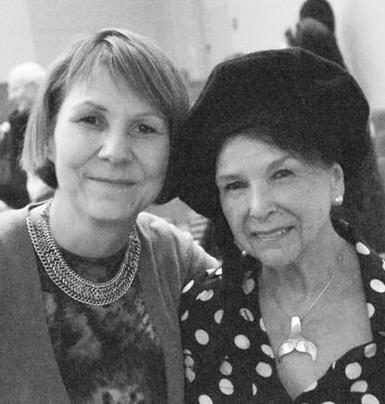 (Edmonton) – The rights of First Nations children take centre stage in the landmark documentary, “We Can’t Make the Same Mistake Twice” which will be screened in Edmonton at 1 pm on February 12 at the Metro Cinema at the Garneau. Co-presented by Reconciliation in Focus and the First Nations Action Research and Education Service (FNCARES) at the Faculty of Extension, University of Alberta, the afternoon event will include a very special discussion with acclaimed filmmaker Alanis Obomsawin and Child and Family Rights Advocate Cindy Blackstock, following the film.

“We Can’t Make the Same Mistake Twice” follows the historic discrimination complaint filed against the Government of Canada in 2007 by the First Nations Child & Family Caring Society of Canada and the Assembly of First Nations. Led by the tireless and determined Cindy Blackstock, the head of the Caring Society, they argued that child and family welfare services provided to First Nations children on reserves were underfunded and inferior to those offered to other Canadian children. 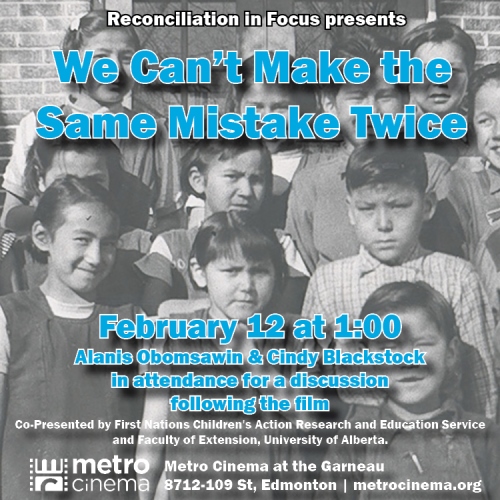 Despite challenges from the federal government to have the case dismissed, the Canadian Human Rights Commission referred it to a full hearing by the Canadian Human Rights Tribunal, which began proceedings in 2013. Over the course of the next three years, Blackstock and her allies tenaciously fought for what they knew was right in the face of overt – and covert – challenges. Obomsawin’s deft documentary lens gives us a rare and detailed glimpse into the Canadian legal system as a remarkable story of courage, conviction and justice unfolds.

This stunning NFB documentary, the 50th by legendary Abenaki filmmaker, Alanis Obomsawin, follows the Human Rights case launched against the government of Canada for racially discriminating against First Nations children. Watch the trailer at nfb.ca.

The Human Rights complaint denounced the gaps in services made available to First Nations children compared to other Canadian children, arguing that these inequalities are based solely on the children’s origins, and play a role in driving First Nations children into the child welfare system, where they are 6 to 8 times more likely than non-Indigenous children to be placed in foster care. The complainants alleged that this situation was not unlike the assimilation and trauma caused by residential schools – a topic that was also discussed during the trial.

Including the many appeals, the legal process spanned nine long years before finally ending in victory for the plaintiffs in 2016. “We Can’t Make the Same Mistake Twice” gives a voice to those involved in this legal battle, notably Cindy Blackstock, Executive Director of the FNCFCSC, who endured government spying and retaliation as a result of her central role in the trial.

Director Alanis Obomsawin guides us through the intricacies of the legal system while never losing sight of the real issues at stake: the welfare of children and the survival of First Nations cultures.

Join Cindy Blackstock and Alanis Obomsawin for the Edmonton Premiere of “We Can’t Make the Same Mistake Twice.”  The film’s running time is 160 minutes, which will be followed by an engaging and informative Q & A session.
Tickets cost $10 for adults; $6 for students and seniors. Buy tickets at the door or in advance through Metro Cinema at metrocinema.org. There are a limited number of free tickets available for youth, Elders or others who would otherwise be unable to attend. Email [email protected] with your request.
The Theatre is wheelchair accessible through the north side door (ramped). The washrooms in the theatre are not accessible; the coffee shop next door has accessible washrooms.
The University of Alberta and Metro Cinema acknowledge their relationship with Treaty 6 territory and specifically wish to acknowledge the Papaschase First Nation on whose unceded land our institutions occupy.