VICTORIA – More than 300 Aboriginal post-secondary students in BC will benefit from over $1 million distributed by the Irving K. Barber British Columbia Scholarship Society this year. The application deadline is March 31, 2017.

The Scholarships are open to BC residents who are Aboriginal, who have been active in their school or community and are planning on studying at a post-secondary institution in British Columbia.

“Irving K. Barber scholarship awards are assisting 384 Aboriginal students to advance their education, build careers and take their place as community leaders,” said Advanced Education Minister Andrew Wilkinson. “Aboriginal youth are the fastest growing demographic in British Columbia, and they are an important part of building a strong, skilled workforce in our province.”

“The Award has changed a lot for me,” notes award recipient Julia Thielman, a Metis student studying at the University of British Columbia in Vancouver, “because it has helped me manage many pressing financial obligations, and being a law student is very expensive.” 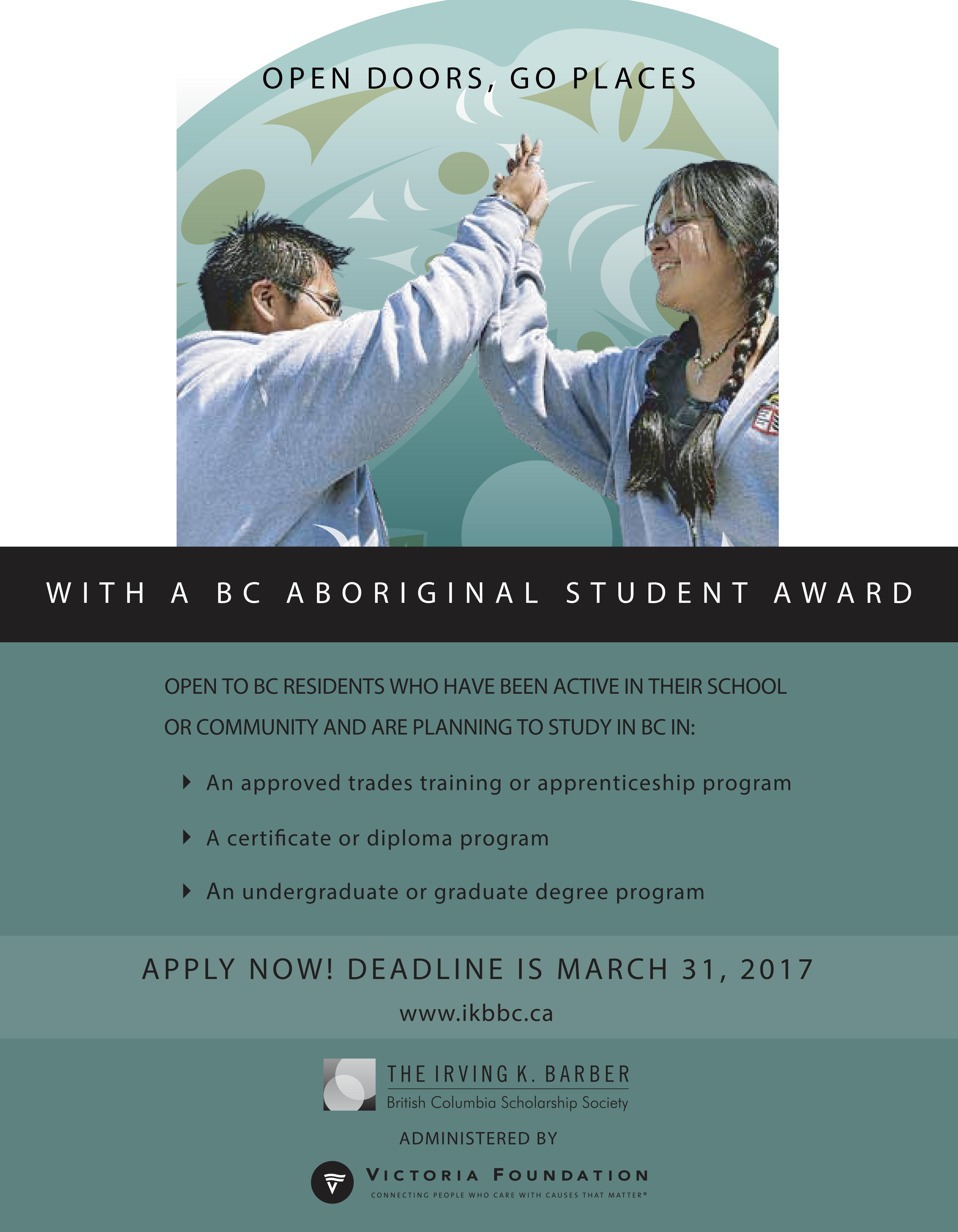 Julia’s road to self-actualization has been mired in challenges and periods of self-doubt. She was born in Edmonton, Alberta, to a family of three children. She has Metis citizenship through her grandparents.  Growing up, she was never quite sure what she wanted to do in terms of a career.

After high school, Julia worked for four years but, never felt she was “getting anywhere”.  She couldn’t get a good job as she lacked the necessary education.  In 2013, she decided it was time to go back to school and so she applied and was accepted to Okanagan College, and later to the Okanagan campus of UBC, where she obtained a degree in Psychology. Julia excelled in her studies and made it onto the Dean’s Honour List, and secured a position as a Research Assistant at the College

Julia eventually decided to study law at the University of British Columbia because of its practical application to the causes that interested her – gender equality and environmental protection. She secured a student loan for her first two years in College but, found it difficult to cover expenses for such things as food, accommodation and transportation. She had to work up to three days each week just to support herself while pursuing her studies. 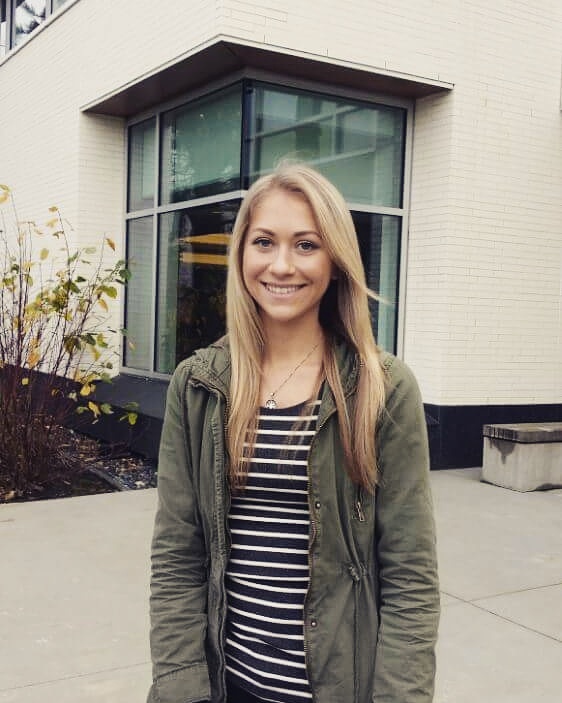 The Aboriginal Student Awards Julia received from the Irving K Barber BC Scholarship Society in 2016 enabled her to focus on her studies rather than worrying about how to meet her basic needs. She also found that she had time to volunteer and so now works with the Law Students Legal Advice Program to provide free legal services to UBC students.  This enables her to help out other students, while at the same time gaining experience as a legal representative.

In the future, Julia hopes to support the Aboriginal community through the provision of legal representation for community members who lack the wherewithal to afford such services. She hopes to utilize her education and professional experience to tackle social issues such as gender equality and environmental protection.

Esmae Rothfusz has received two Aboriginal Student Awards from the Irving K Barber BC Scholarship Society to help her with the costs of training to become a nurse at the University of British Columbia – Okanagan.  She received $3,500 in 2015 as a New Applicant, and an additional $1000 in 2016 as a Past Recipient as she continued with her education.

“The best part of receiving the Irving K. Barber Aboriginal Student award is knowing there is a support system to encourage people towards higher education and many more people should take advantage of this opportunity,” says Esmae. 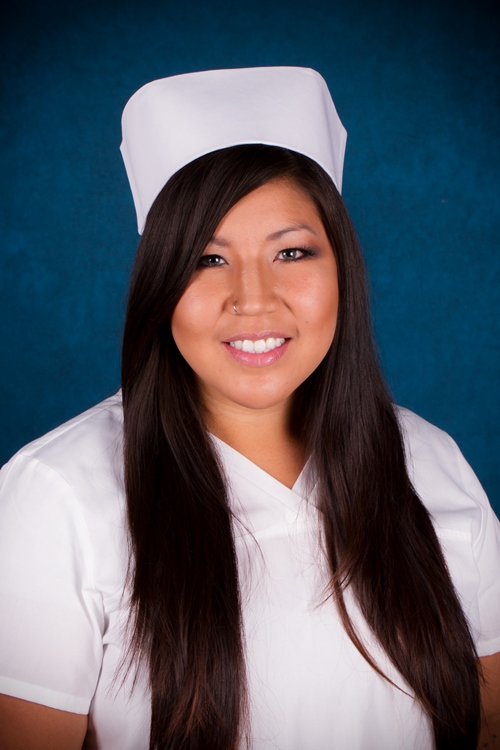 Esmae found the first two-years of her nursing program to be very challenging as she struggled to adjust to life as a student after several years away from the classroom, and to the difficult task of learning a whole new medical vocabulary. However, her parents had always inspired her work hard and to strive to be the best she could be academically.  Esmae also wanted to be a role model for other Aboriginal students and so dedicated herself to succeeding and to achieving strong grades.

The Aboriginal Award that Esmae earned has been particularly helpful in covering the ongoing cost of commuting between Peachland, where she lives, to the Kelowna campus of UBC. She also used part of it to pay for a summer course she took to save time and expedite her graduation.

Esmae has received a lot of support from her Aboriginal community – the Saik-uz Nation – that has providing funding for her tuition and living expenses. Her prospects include working in a hospital in Peachland, B.C., and building a career in maternity care as she would like to contribute to her community by providing healthcare to expectant mothers. Most of her current courses are taken from a First Nations social/welfare perspective, and she believes this will help her deliver appropriate healthcare services to Aboriginal people.

The Irving K. Barber Society’s Aboriginal Student Awards program is funded from the returns on an endowment fund established by the Province of British Columbia. It was created to assist in removing barriers to higher education for Aboriginal peoples. Awards of $1,000 to $5,000 each are issued every year through a competitive process to students studying at all post-secondary levels, from trades training to doctoral programs.

“Ike Barber recognized the untapped potential of British Columbia’s aboriginal youth,” says Society Chair Ray Gandhi, “and the society that bears his name is pleased to facilitate, in some way, the educational advancement of these very deserving students.”

To find out if you might qualify for an Aboriginal Student Award, visit www.ikbbc.ca

Be the first to comment on "Irving K. Barber Scholarships help Aboriginal Students in BC: Apply by March 31"