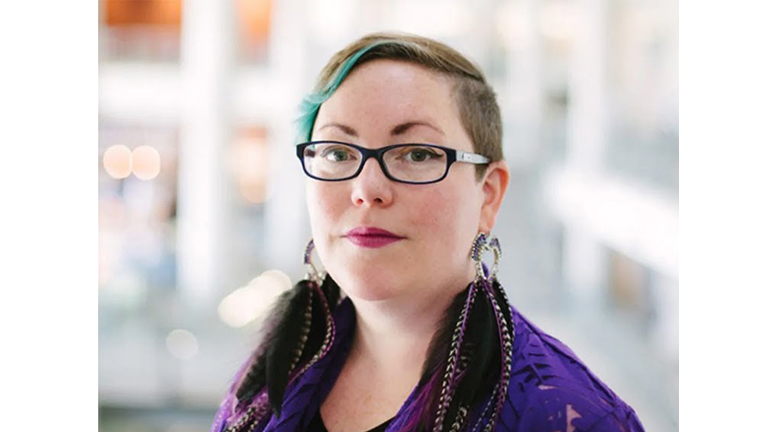 Professor Chelsea Vowel is one of five mentors working with participants at the Audible Indigenous Writers Circle.

(ANNews) – The inaugural Audible Indigenous Writers Circle is underway, with 15 Indigenous participants from across the country workshopping their writing with five mentors over the next several months.

Two of the five mentors are Edmonton-based — Inuk writer and academic Norma Dunning, and Metis writer and professor Chelsea Vowel. The others are Tanya Talaga, Richard van Camp and Kim Wheeler.

Vowel, who began her writing career as a blogger, says it’s important for Indigenous people to have a space where they can develop their writing abilities.

“Even though there are now quite a few publications out there by Indigenous people across genres — there’s so much more now than there was when I was younger — it’s still a difficult industry to break into if you don’t have connections,” she told Alberta Native News.

Vowel says that when she first started writing, she faced a steep curve learning how the publishing industry works.

“We have to do that for one another because nobody else is going to help us,” she said.

Dunning says she’s honoured to be in the company of her fellow mentors.

“Their creativity makes my head spin,” she said. “It has just been wonderful to be a part of this.”

The program operates simply. The student submits their writing to the mentor, and the mentor provides them with feedback and direction, and sets a deadline for their next submission, Dunning explained.

“I find when people start writing, they just keep going,” she said.

Edmonton-based student Scott Olsen, 40, says he only recently became a writer, though he works as a social studies teacher at a public high school.

“I’ve always thought I’ve struggled with writing, in terms of being able to articulate my thoughts in a way that is fluent and easy for others to understand,” said Olsen, who has a Saddle Lake status card but lived in Edmonton his entire life.

He picked up writing when he went to get his master’s at the University of Alberta, where Vowel and Dunning teach.

While he struggled in undergrad, Olsen says the university has come a long way since in accepting Indigenous voices.

Olsen, whose grandmother survived a residential school and his mother survived the Sixties Scoop, says his writing documents his journey from a youth who resented education to one who embraced it, dealing with the tensions in his assimilated Indigenous identity.

“I’m stuck between worlds,” he said. “As much as I want to be a part of that Indigenous world, I struggle at times to find connection and purpose due to generational trauma.”