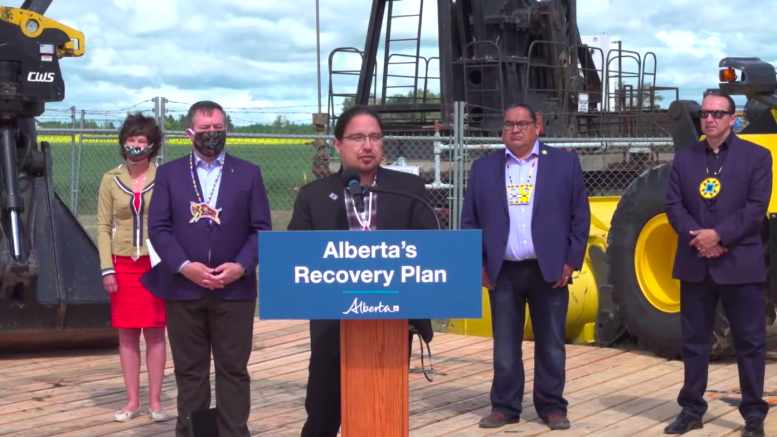 Editor’s note: This article was updated on July 21, 2020 to reflect that the funding for this project came entirely from a Federal government program.

The entire funding for this program is coming from a $1.7 billion announcement from the Federal Government to clean up orphan wells in Alberta, British Columbia and Saskatchewan.

Alberta Premier Jason Kenney said, “First Nations must be a part of Alberta’s economic recovery from the COVID recession. The billion dollar Site Rehabilitation Program is an important part of the Alberta Recovery Plan. It will create thousands of jobs, and help to save energy service companies during this crisis in the oil and gas industry.

“We’re doing everything we can to ensure that Indigenous Albertans participate in this program, as workers, contractors and by cleaning up abandoned wells on First Nations Reserves.”

Backwoods Energy was approved to start closure work on on 55 sites across Enoch Cree Nation. Grand Chief Billy Morin, Confederacy of Treaty Six First Nations, and Chief of Enoch Cree Nation said, “This unprecedented collaboration between government, First Nations and industry, that benefits all peoples, is what our common ancestors had in mind when Treaty Six was signed.”

Western Petroleum Management was approved to work on 257 sites throughout Alberta. Chief Tony Alexis of the Alexis Nakota Sioux Nation said, “As majority shareholder of Backwoods Energy Services, we are pleased to see the investment into Indigenous communities as well as the partnership between Enoch Cree Nation, the Site Rehabilitation Program and Backwoods Energy. The program provides important initial funding to clean up well sites throughout Alberta and within Alexis Traditional Territory.”

“Further Indigenous involvement is expected in subsequent rounds of the two-year SRP.”

Grand Chief Billy Morin also said of the SRP, “This is just another door to the next chapter of our partnership with the provincial government and our industry partners,” he said. “Our work is not done.”

According to CBC, Alberta Premier Jason Kenney praised the announcement in April 2020, and thanked the federal government for helping to fund the cleanup of orphaned and abandoned wells.

“This is critical to getting thousands of people in the energy sector back to work immediately,” he tweeted.

The Government of Alberta stated, “Since its launch on May 1, $69 million has been allocated to 140 companies through the Site Rehabilitation Program. This will create more than 300 of the approximately 5,300 jobs the program is expected to create.”