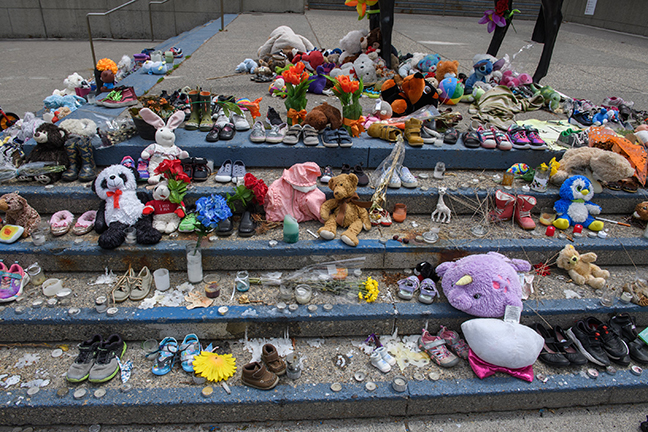 The memorial, at Calgary City Hall displays hundreds of shoes along with other children’s items to honour the children who never returned home from Indian Residential Schools. (Photo City of Calgary)

(ANNews) – Indigenous Elders hosted an Aug. 26 pipe ceremony to bless a memorial to the children who never returned home from residential schools on the steps of Calgary City Hall, part of which was set on fire by an arsonist earlier this month.

Representatives of the City of Calgary, including Mayor Naheed Nenshi, city staff and councillors, were in attendance at the ceremony, which was intended to signify a shared commitment to reconciliation between the city, and Calgary’s Treaty 7, Metis and urban Indigenous populations.

“I am here to create a positive relationship with all walks of life and culture. We are bringing the energy to the place where we can all move forward,” said Elder Leonard Bastien in a news release from the city.

Harold Horsefall, the city’s Indigenous issues strategist, expressed the city’s commitment to learning from the past to prevent future atrocities.

“The memorial is an important reminder of the dark truth of what took place at Indian Residential Schools in Canada,” said Horsefall. “This is a truth that must not be forgotten.”

The memorial, which includes hundreds of shoes and other children’s items, such as stuffed animals, to symbolize the children who died, will remain at the steps of City Hall while the city engages with Indigenous leaders and until “operational needs” require its removal, the city release notes.

The memorial was set up in June, just after news of the remains of 215 children on the grounds of the Kamloops Residential School were uncovered.

The ceremony was an apparent response to a call for the memorial to become a permanent fixture at Calgary’s municipal plaza.

“Unfortunately because the city is so far behind on working with us on outreach in creating a permanent structure, this was going to happen. We knew we needed a memorial. It happened organically.”

Robinson said the city needs some sort of “visual representation” of the children who were killed at residential schools, and that the current memorial should remain until there are concrete plans for a permanent structure.

“I think for Canadians who are just so uncomfortable with any Indigenous truth, they want it gone as soon as humanly possible,” she told Global.

“Unfortunately we can’t do this anymore. That is what’s lead to the problems that we have.”

Coun. Evan Woolley agrees having a memorial serves an important purpose on the path to reconciliation.

“We have (an) immense opportunity to create something more permanent,” Woolley said to Global.

Police are still looking for the culprit in the attempted arson of the memorial. The city has released images from CCTV footage of the individual, who attempted to set fire to the memorial before running away. The flames were extinguished by security officials, but some of the items were severely damaged.

“It is still too early to know what motivated the suspect and investigators need time to investigate,” police said in an Aug. 4 news release. “The Hate Crimes and Extremism Unit is assisting with the investigation to ensure any evidence of hate motivation is captured and handled appropriately.”