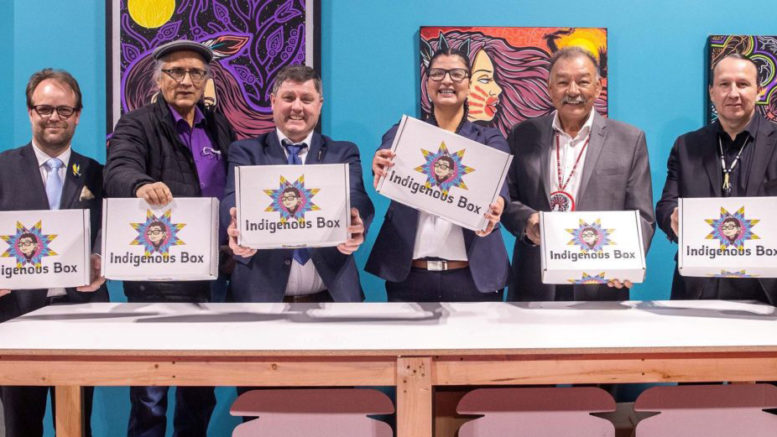 (ANNews) – Mallory Grace Yawnghwe is from Saddle Lake Cree Nation and has become one of Alberta’s top Indigenous female entrepreneurs due to the success of Indigenous Box.

On March 10, Indigenous Box launched at the Edmonton International Airport (EIA) in the Airport City Sustainability Campus, taking over warehouse space and accessing opportunities to grow and export across Canada.

Indigenous Box is a subscription box and corporate gifting company that began in the basement of founder Yawnghwe’s home and in one year has grown to several thousand clients. The company provides Indigenous-made products on a quarterly basis to subscribers and custom orders year-round for corporate clients across Canada.

Chief George Arcand Jr. was elected Grand Chief on January 7, 2022, by the 17 Chiefs that make up Treaty 6 Territory.

“I talked to the Chiefs about three priorities,” said Grand Chief Arcand. “The first priority was ensuring that we continue to protect our treaties, enhance the education for all those in Alberta and Canada on the principles of Treaty and the understanding of Treaty. As we look at reconciliation, and we look at things that are starting to make a change in how we do business, it becomes essential that people understand what does treaty mean and how does it affect our day to day operations, and how does it affect Albertans and Canadians.”

Arcand said the second priority would be to sign an agreement with the Government of Alberta to streamline many high priorities areas such as health and education. The third priority for the Treaty 6 Grand Chief was economic opportunity and creating space for it. He also noted the importance of reconciliation in Treaty 6 Territory with the Nations of Treaty 6.

In her address to the crowd, she showed those in attendance that with her hard work, grit, perseverance, and dedication, she and her husband created a business that helps other entrepreneurs.

A social media post by Indigenous box said, “Today we told a roomful of business, government, and community leaders that they were witnessing history. And they believed it because we believe it. This is for all the rez kids.”

“There are many Indigenous women-owned businesses across Turtle Island. Know that we’re here to support you in your growth, whether it’s Air Canada, Apple, or the trade commissioner service internationally. We love that you have gone from 500 boxes a month to a client list of 5000,” said MP Randy Boissonnault, Minister of Tourism and Associate Minister of Finance.

“You are witnessing history in the making, big words… I know. Words that a year ago I couldn’t have imagined saying,” said Yawnghwe.

She explained it’d been 12 months since she signed their incorporation papers. And she says, “I can stand here and look you in the eye and tell you with complete confidence we are changing the face of indigenous business.

“Take a look around this 3400 square foot warehouse packed with pallets in inventory shelves with products and materials. I invite you to imagine that just 12 months ago, we were in an 80 square foot bedroom in the basement with merchandise from floor to ceiling.”

“We were hoping and praying we could sell our first 50 boxes. We did, by the way, in the first hour,” said Yawnghwe.

And it’s about economic empowerment and recognizing our Indigenous economic contributions.

She said it’s about letting Canadians know that Indigenous people are valuable contributors and equal players.

“Indigenous box is about helping people to remember our true legacy – our ingenuity, our resourcefullness, our industriousness, our intentionality, our purposefulness, our ability to cooperate,” said Yawnghwe.

“It is only possible because of Indigenous entrepreneurs, artists and Indigenous peoples from coast to coast.”

Indigenous Box doesn’t produce any of the products, but rather, the company purchases large orders from other Indigenous entrepreneurs.

Yawnghwe said, “One woman told me after I placed a large order that this is life-changing income.”

Through Indigenous box, Mallory can build up many small Indigenous businesses or entrepreneurs that otherwise would never have the opportunity or the chance to sell their products on such a national level.