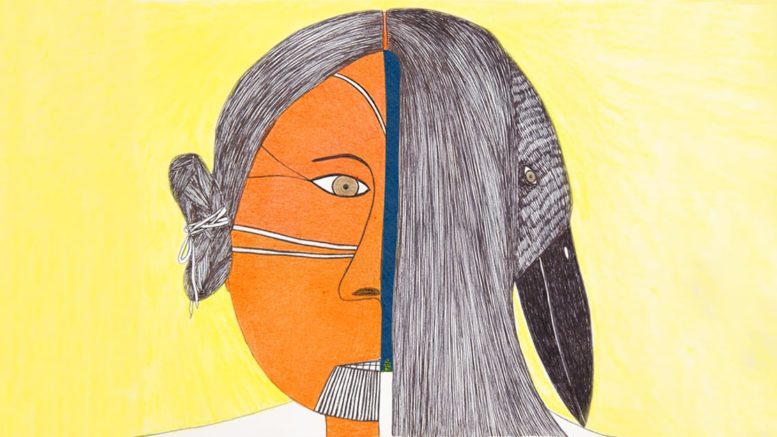 "Half man, half crow" art by Ningiukulu Teevee. From "Promises, promises: Living up to Canada’s commitments to climate and Indigenous reconciliation."

The report, entitled Promises, promises: Living up to Canada’s commitments to climate and Indigenous reconciliation, contends that one of the most effective ways to save the planet is to look towards Turtle Island’s original inhabitants and their stewardship of the land.

“We need to include an Indigenous lens and traditional knowledge into the process to fight climate change,” Jason Rasevych, Deloitte’s national leader of Indigenous services and a band member of the Ginoogaming First Nation in Northern Ontario, told Alberta Native News.

“At times, western science is perceived as the way to do that through certain decarbonization efforts, but overall there’s a major role for Indigenous-led, nature-based solutions.”

He said Indigenous peoples have “ancestral responsibilities and inherent responsibilities” to the natural world that existed prior to any contact with settler society, as well as an abundance of practical knowledge of the “local environment and context related to their specific area.”

“They have observed the dynamics of plant and animal population, the cycles of production across seasons and years, the influence of weather and climate, and the effects of disturbance from human interference,” Rasevych said.

“When we look at what is happening in certain areas due to climate change, Indigenous peoples are the first impacted and they are the ones noticing some of the issues that are out on the land.”

He also referenced the Haudenosaunee seven-generation principle that looks at the impact of whatever we do now on future generations as being particularly relevant in combating the climate crisis.

The report’s preface notes, “Too often, the link between the climate crisis and the removal of Indigenous peoples from their lands is overlooked.”

Rasevych said this is because of the legacy of colonialism and its dehumanization of Indigenous peoples, as evidenced by the Indian Act, residential assimilation institutions and the Sixties Scoop.

Modern mining and infrastructure development have had the impact of further cutting off Indigenous peoples from their ancestral lands, which he said “has been overlooked for socioeconomic benefit.”

He said Canada is entering a “new paradigm” because of jurisprudence established in hundreds of court cases that acknowledges Indigenous land rights, alongside the Truth and Reconciliation Commission’s calls to action and United Nations Declaration of the Rights of Indigenous Peoples.

The report is the product of Deloitte’s own reconciliation action plan, which has four pillars — inclusion, education, employment and economic empowerment — progress on which Rasevych said will be tracked by the company.

For example, Deloitte has a four-hour course employees are expecting to take to understand Indigenous history and the importance of reconciliation, which 80 percent of the firm has taken.

In terms of employment, the company has “specific targets” for recruiting Indigenous candidates. Deloitte has also established an Indigenous supplier portal for businesses looking to contract with Indigenous-owned firms.

“We’re striving within our firm to decolonize our corporate mindset,” said Rasevych.  “No matter if you’re Indigenous or not Indigenous, we’re all Treaty people and we all have a role to play in advancing reconciliation moving forward.”