VICTORIA – More than 300 Aboriginal post-secondary students in BC will benefit from nearly a million dollars distributed by the Irving K. Barber British Columbia Scholarship Society this year.

The Society has granted $985,000 to 303 Aboriginal students in BC to support their studies at postsecondary institutions throughout the province.

The Society’s Aboriginal Student Awards program is funded from the returns on an endowment fund established by the Province of British Columbia. It was created to assist in removing barriers to higher education for Aboriginal peoples. Awards of $1,000 to $5,000 each are issued every year through a competitive process to students studying at all post-secondary levels, from trades training to doctoral programs. 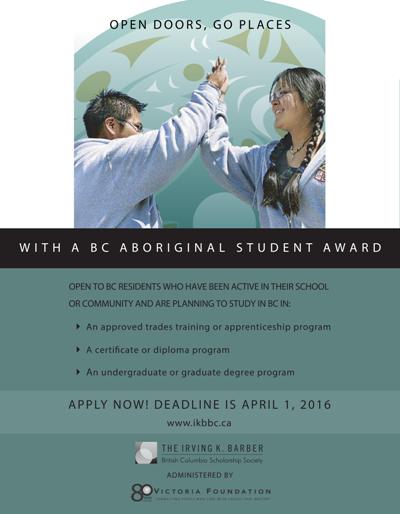 Pamela Langevin is in her second semester of the Bachelor of Education Post-degree Professional program at the University of Victoria. This program allows participants to study four condensed terms in order to obtain the degree.  Langevin received a $5,000 Aboriginal Student Award in 2015 to support her in her studies.

Langevin has worked with youth and children for most of her life in varying capacities including working as a tutor, mentor, and a program coordinator of an educational reading program at a public library.

After pursuing a degree in Writing, Langevin felt that something was missing. When she came across the option to complete a degree in Education, she saw it as an opportunity to explore a common theme in her life – connecting with youth and children. 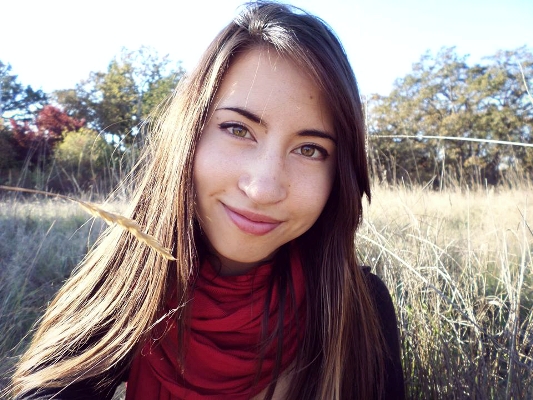 Pamela Langevin received a $5000 scholarship in 2015 to help with her university expenses.

“Working with children reminds me of how transformative education can be,” says Langevin. “It was a natural fit.”

Although she very much loves to write, Langevin wanted an opportunity to make a difference in her community and in the Aboriginal education available in classrooms.

“I believe the future of Aboriginal communities depends on culturally-inclusive and accessible education,” says Langevin.

Not only that, Langevin believes that work in rural communities, specifically, can make a difference in the way that Aboriginal children relate to the stories of their ancestors.

“If I can somehow work in rural communities and ensure that the curriculum is accurate and inclusive, I think things could really change for Aboriginal children and youth,” says Langevin.

Langevin left home when she was 16 and has been financially independent for nearly a decade. Without scholarships, awards, loans, and grants, Langevin would not have been able to pursue her education. She is very grateful for the support she has received so that she may continue her studies.

“The Aboriginal Teacher Education Award has allowed me to not worry about finances,” says Langevin. “My future is more secure and I can focus on my studies.”

“I really believe that everyone should apply for awards, regardless of where they are in their journey – going for it is important,” says Langevin.

Langevin loves reading and writing poetry and to help manage the stress of her workload, she jogs regularly. She also fosters a cat through a non-profit organization to help maintain joy and companionship on long study nights.

The Irving K. Barber BC Scholarship Society provides scholarships and awards to students attending public post-secondary institutions throughout the province and internationally. Since its inception, nearly $10 million has been distributed to BC students from its six scholarship and award programs. The Victoria Foundation provides administrative support to the Society.

For more information on the Aboriginal Awards Program visit www.ikbbc.ca/web/aboriginal.