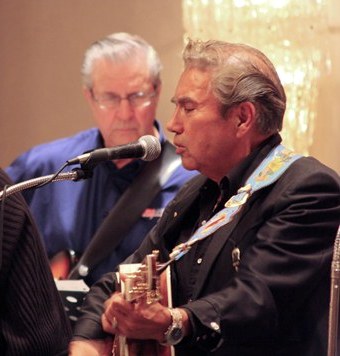 (ANNews) – Over the past half-century there have not been many Aboriginals who really made their mark in the country music industry.

Manitoba became a bit of a hotbed thanks to recording artists such as Lucille Starr, Ray St. Germaine and, later, Erroll Ranville (C-Weed Band). That province also blessed us with fiddling great, (the late) Reg Bouvette and Andy Desjarlais.

Oh, there have been others, many others, who were potentials but never got the breaks – individuals like Amber Dawn Fleury, Sharon Anderson and Priscilla Morin. 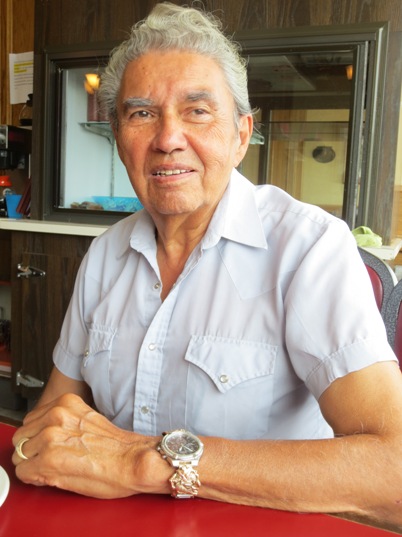 Country music legend Harry Rusk was honoured with a lifetime achievement award from the prestigious National Traditional Country Music Association. A member of the Dene Nation, he is the first Canadian to receive this honour. Photo and article by Terry Lusty

Hold on! Wait a minute! What about Harry Rusk??

Actually, there are a lot of today’s generation who don’t know of Harry Rusk or any of the others mentioned above.

On September 4, Rusk was honoured with a Lifetime Achievement award from the National Traditional Country Music Association (NTCMA) in LeMars, Iowa. The award recognizes Rusk’s many years and efforts, his dedication and commitment, performances and recordings in keeping alive “traditional” country music. In so doing, Rusk became the first Canadian to ever receive this award in its 40-year history.

Bob Everhart, president of NTCMA lauded Rusk as a “wonderful vocalist” and “a gifted guitarist.” He said that Rusk’s renditions of traditional-style country music and song are “so much more ‘country’ than anything that is being produced today, which lands on a top-40 chart that is also not country.”

After 60 years in the business himself, Everhart continued, “I would much rather listen to Harry Rusk than anything coming out of Nashville today called country.”

Just how Rusk arrived at this stage in his life follows:

In the first half of the 20th century death stalked the land. In some of Canada’s Native communities 60 to 70 percent of the population was victimized by the dreaded disease, tuberculosis!

In 1907, for example, Dr. Peter Bryce, the chief medical officer for Indian Affairs, reported that one Indian Residential School alone had “a death rate of 69%.”

The scourge claimed Edward Etsuaq, the father of seven year-old Harry Rusk in 1944. By the time Rusk was 15, his mother and his only brother both passed away from TB as well.

At the age of 11, Rusk himself was afflicted and hospitalized for four years at Edmonton’s Charles Camsell Hospital, along with so many other Aboriginal victims from near and far.

In one of the four years Rusk spent there he was in the ward notoriously referred to as “death row.”

Life did not look very promising for the young Slavey Indian from Ft. Nelson in north-eastern British Columbia where trapping was still the mainstay of the economy. However, things happen and they sure did for the soft-spoken Rusk boy. 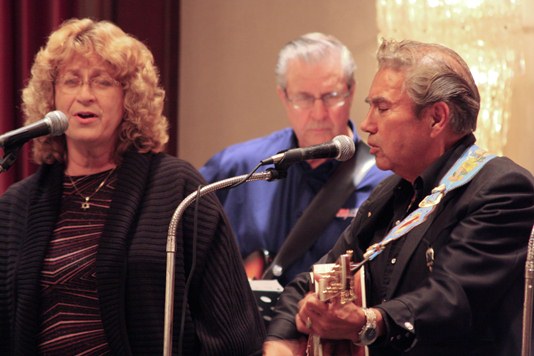 In June of 1952 Rusk had the distinct pleasure of meeting a special visitor at the Camsell Hospital. That visiting celebrity was none other than country music great Hank Snow (The Singing Ranger).

The starry-eyed Rusk idolized Snow and had a pretty good singing voice himself. After his introduction to the singing great, Rusk corresponded with Snow over the years and informed him of his own secret desire to one day be just like him and record a country music album. A lofty goal for a bush Indian, but Snow encouraged him and told Rusk to be sure to send him a copy of his album when he got a recording done.

The years went by.

Rusk developed his guitar playing and singing after his mother bought him his first guitar for $15. When his mom died when he was 15, he was on his own and knew he had to go elsewhere for work and to pursue his dreams. He eventually left home and he also left behind a discriminating stepfather who he says, often told him he’d never amount to anything. As well, claimed Rusk, he left behind a doubting community that never supported him. 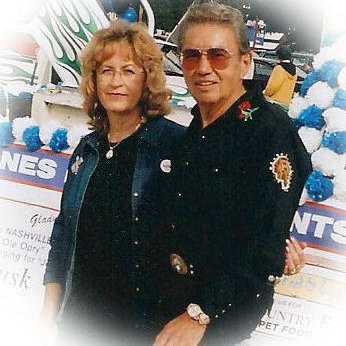 He moved to Edmonton, did a brief stint in the Air Force, returned to Edmonton and formed a country band. They travelled about and became very popular everywhere they went. They performed at the large venues and even at CFL football games with over 20,000 fans present.

Once Rusk cut his first album he followed up on his promise to send a copy to Hank Snow. Snow liked what he heard and Rusk didn’t have to wait long. On June 13, 1972 he received a call that became a true turning point in Rusk’s life.

That phone call from Snow came exactly 20 years after he first met Rusk. That also set in motion another first for Canada’s Aboriginal people. When Rusk climbed the stage later that same month at the Grand Ole Opry, he was the first-known Treaty Indian from Canada to grace that stage. And, he did that for 22 consecutive years!

Country Music Roundup covered Rusk’s debut which was arranged by Snow himself. The publication applauded Rusk who it said, “knocked ’em dead!” It additionally praised his performance which made it much easier for those in the executive end of the business to sell Canadian Country Music as a viable product.

While ‘Rose of Mexico’ became Rusk’s first big hit song, his all-time favourite has been ‘The Red Man and the Train’ which appears on his third of 10 albums. “I’m still getting royalties from it,” Rusk chuckles.

Edmonton- based Fran Sinclair, a fine vocalist in her own right, has shared many stages with Rusk. “People used to plan to go see (his) shows well ahead of time. A few years ago he did a very successful show in Red Deer . . . a large group of people  came to see him.”

On a personal note, she added, “He’s a very personable friend, soft-spoken, truthful.”

Fiddler Charlie Shott remarked about the major gigs Rusk did at places like The Red Barn, Bonaventure Hotel, and others.

There are two books about Rusk, one of them called ‘Beyond the Bend of the River’ which is also a 1986 movie about Rusk’s life.

When his son was miraculously healed from a serious ailment in the mid-1970s, Rusk began turning to gospel singing and was later ordained a minister.

Although he’d been on the Grand Ole Opry and was doing well financially, Rusk claims he somehow felt, “something missing, had no peace.”

When he turned to the Lord, “Then I found my peace,” he concluded.

Although he’s now getting up in his years, Rusk continues to perform at various functions, events, charities and legends concerts. In 2004, he was honoured with a ‘Legend of Canadian Country Music Award.’ Before that, in 1996, he was inducted into the ‘Hank Snow Country Music Archives and Hall of Fame’ in Nova Scotia (Hank’s birthplace). In 2010, Rusk was presented with a ‘Bev Munro Traditional Country Music Legend Award.’

Fellow country music artists, radio station staff, music store owners, everyone who meets him, all love Rusk and have nothing but kind words for/about him. Truly an icon in the industry, Harry Rusk is definitely one of this country’s national treasures, a fine ambassador to the industry, and an inspiration to many who aspire to a career in the business, just as his late friend Hank Snow had been to a young Harry Rusk at the Camsell Hospital back in 1952.

Harry is the father of eight children. He and his wife, Gladys, reside on acreage in the Rocky Mountain foothills of west-central Alberta.

Despite the hurdles and adversities through his own lifetime, Rusk persevered and became a success in a very difficult career. He showed the way and proved that if you set your mind to it and work hard, you can accomplish pretty well anything.

We at Alberta Native News salute Harry Rusk on the occasion of his Lifetime Achievement Award from the NTCMA. God bless you Harry.