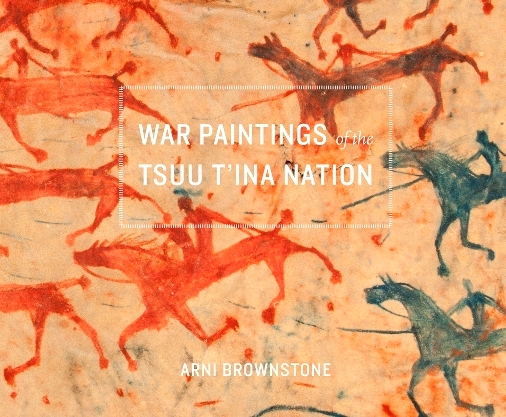 (ANNews) – Arni Brownstone, the author of War Paint: Blackfoot and Sarcee Painted Buffalo Robes in the Royal Ontario Museum and the Assistant Curator of World Cultures at the Royal Ontario Museum in Toronto has a new offering available on the shelves of bookstores throughout Canada. Brownstone’s latest release, War Paintings of the Tsuu T’ina Nation, was simultaneously published and released, by the University of Nebraska Press and by the University of Alberta Press. Already on the bookshelves of Canadian retailers and internet bookstores, this outstanding piece of work is a worthy investment and a must-have for scholars, educators and students of Indigenous Studies programs across the continent.

An experienced researcher and polished penman, Arni Brownstone’s new release runs a bit more that 150 pages, many of which are filled with interesting and fully translated plates, figures and photographs, including several chapters highlighting pictographic translations.

War Paintings of the Tsuu T’ina Nation is a study of several important war paintings and artifact collections of the Tsuut’ina (Sarcee) that provides insight into the changing relations between the Tsuut’ina, other plains tribes, and non-Native communities during the nineteenth and twentieth centuries. 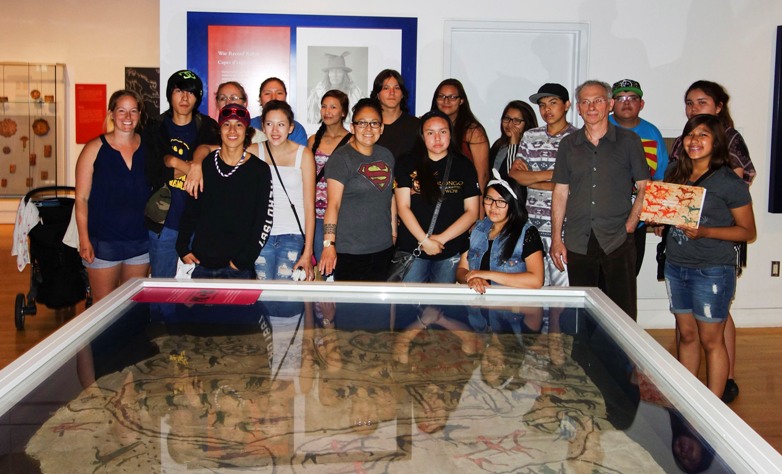 Students from Tsuut’tina School visited the Royal Ontario Museum in Toronto this past summer and met author Arni Brownstone who presented them with a copy of ‘War Paintings of Tsuu T’ina Nation’ for their school library.

Brownstone’s study includes all known Tsuut’ina artifacts. His work, which offers valuable insight into a culture not many know anything about, offers readers an inside look at the tools and methods of communication and storytelling in a time before there were books to write on or pens to write with. Hundreds of pictorial messages and descriptions of wars, captured horses, messages, descriptions of their Cree enemies and other important events can be found throughout the manuscript, each translated so that every reader has the ability to grasp the atmosphere of the day. Brownstone’s analysis of each artifact, particularly the five paintings considered to be among the most valuable of the Tsuut’ina artifacts, is meticulously thorough and readers will enjoy the added education the author brings to them with his unique story-telling ability.

In a recent blog, Arni Brownstone paid tribute to a group of Grade 9 high school students from the Tsuut’ina High School who, with their teacher, Marie Menard, travelled to Toronto to visit the Royal Ontario Museum (ROM). The teacher surprised him with a phone call and he agreed to meet the students at the ROM the next day.

“Today I had the pleasure of meeting these warm and well-mannered students,” he wrote. “Surely the highlight of their visit to the First Peoples Gallery was viewing the buffalo robe painted in 1908 by Two Guns with the war exploits of Bull Head, the esteemed Head Chief of the Tsuut’ina. In 1877 he negotiated the treaty on behalf of that tribe and established their reserve about 14 kilometres from the centre of Calgary. The visit was serendipitous as my  book, War Paintings of the Tsuu T’ina Nation, has just been published so I was able to give a copy to school library. It warmed my heart to note how interested and thankful the students were for the book. The students asked for a photograph to be taken and they carefully posed themselves with Bull Head’s robe showcase in the foreground and in the background the Chief’s photograph, still a strong presence in the Tsuut’ina community.”

That Chief Bull Head maintains a strong presence in the community comes as no surprise; just as Cree Chief Poundmaker’s (Pîhtokahanapiwiyin) presence remains strong throughout northern Alberta and Saskatchewan. In his book, Brownstone speaks about the cultural differences and distinctive styles of paintings that varied from one tribe to another. He also speaks about the relevance of the messages, who looked after them and what they meant to both those who painted them and those who study them today.

During much of the nineteenth century, paintings functioned as the Plains Indians’ equivalent to written records. The majority of their paintings documented warfare, focusing on specific war deeds. These pictorial narratives, appearing on hide robes, war shirts, tipi liners, and tipi covers, were maintained by the several dozen Plains Indians tribes, and they continue to expand historical knowledge of a people and place in transition.

Brownstone has done a magnificent job of providing, in layman’s terms, an in-depth look at life on the plains in the 1800’s. His unique style and his mastery of providing detailed information on each of the artifacts in his study will provide any high school aged and older reader with an opportunity not afforded students a decade ago. Books on the history of Tsuu T’ina Nation, like books on most Indigenous Nations, here in Canada and in the United States, are difficult to find.

Experts in cultural studies are excited about Brownstone’s new book. Janet Catherine Berlo, professor of visual and cultural studies at the University of Rochester and author of Spirit Beings and Sun Dancers: Black Hawk’s Vision of the Lakota World gave it an overwhelmingly positive review. She asserted, “Brownstone’s meticulous study makes available a unique set of little-known hide paintings and offers valuable insights into one of the less studied indigenous societies of the Great Plains. A must for every library on Native North American art and culture.”

War Paintings  of the Tsuu T’ina Nation (isbn: 978-1-77212-052-3) has been published with the assistance of a grant from the Federation for the Humanities and Social Sciences, through the Awards to Scholarly Publications Program, using funds provided by the Social Sciences and Humanities Research Council of Canada.

Be the first to comment on "Book Review: War Paintings of Tsuu T’ina Nation"