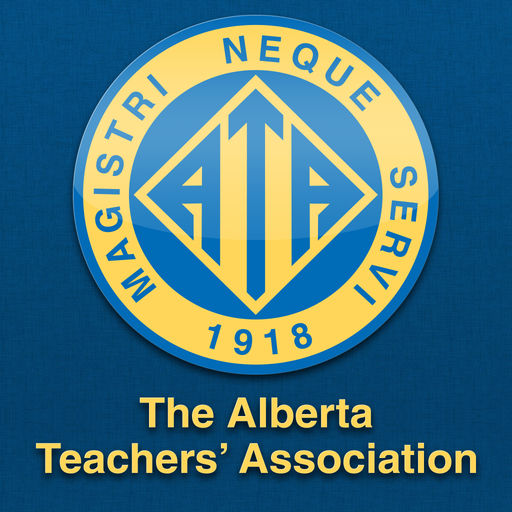 (ANNews) – On October 13, 2018 two educated and intelligent women stepped up to the podium in a ballroom at the River Cree Resort’s Marriott Hotel; one to encourage Albertans and Canadians to denounce pipeline expansion and the other to defend the rights of working Albertans, many of whom earn a living in a province that depends on the oil industry, and next to Saudi Arabia and Venezuela, houses the third largest oil reserves in the world.

On one side of the debate was environmentalist and policy adviser Tzeporah Berman; on the other side, Alberta premier Rachel Notley. Both had been invited by the Alberta Teacher’s Association (ATA) to address teacher delegates during their October 13-15 “Grounded in Truth, Soaring with Knowledge” conference. About 250 social studies, Indigenous education, and environmental and outdoor education teachers attended the event. The first speaker was Modern Resources CEO Chris Slubicki, who spoke at length on the strength of the province’s gas and oil industries and its vast and barely tapped oil reserves.

The ATA received its share of flack for inviting Berman to speak at the conference; much of that negativity came from UCP leader Jason Kenney, a climate-change denier whose disregard for the world’s scientific community has become legendary.

ATA President Greg Jeffery defended his organization’s decision, noting that “teachers, as smart and thoughtful professionals, will be able to hear a range of perspectives and use that discussion to help inform the conversations that occur in their classrooms around these critical issues.”

Some have labeled the speeches by Berman and Notley as a showdown between two speakers at opposite ends of the rainbow. Though their opinions on how to approach the future are worlds apart, the bottom line is that despite their differences on what needs to be done to get there, they do agree on the need to eventually introduce alternative sources of energy that don’t involve the use of fossil fuels. 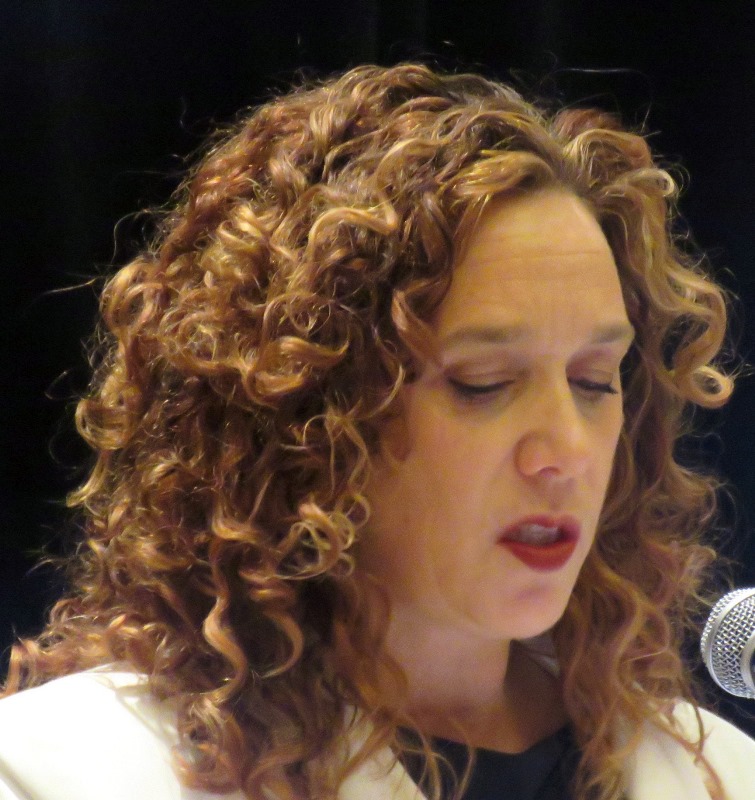 Berman, the first to address the gathering, said she isn’t calling for an immediate end to the use of fossil fuels, she just wants expansion of that use to stop.

“No one is saying shut down the oil and gas industry overnight,” Berman remarked during her speech. “No one is saying buy more from other countries; what we’re saying is right now, it’s big enough.

Premier Notley called the approach being taken by Berman and other pipeline expansion protesters “a disaster, not only for working people but quite frankly for effective climate action as well. If we write off the jobs and the livelihoods of hundreds of thousands of working women and men, I guarantee you we will write off the ability to move forward on climate change or, quite frankly, on just about any kind of progressive change.”

Berman said that the days of using fossil fuels are coming to an end and that building a pipeline that’s designed to last upwards of 50 years doesn’t make sense.

“We can’t address climate change by building more of the past,” remarked Berman. “The idea that pipelines are answers to climate change is absurd. You don’t buy more cigarettes to quit smoking.”

She said instead of expanding the Trans Mountain Pipeline, Alberta should be concentrating on investing its time and money on renewable energy solutions. 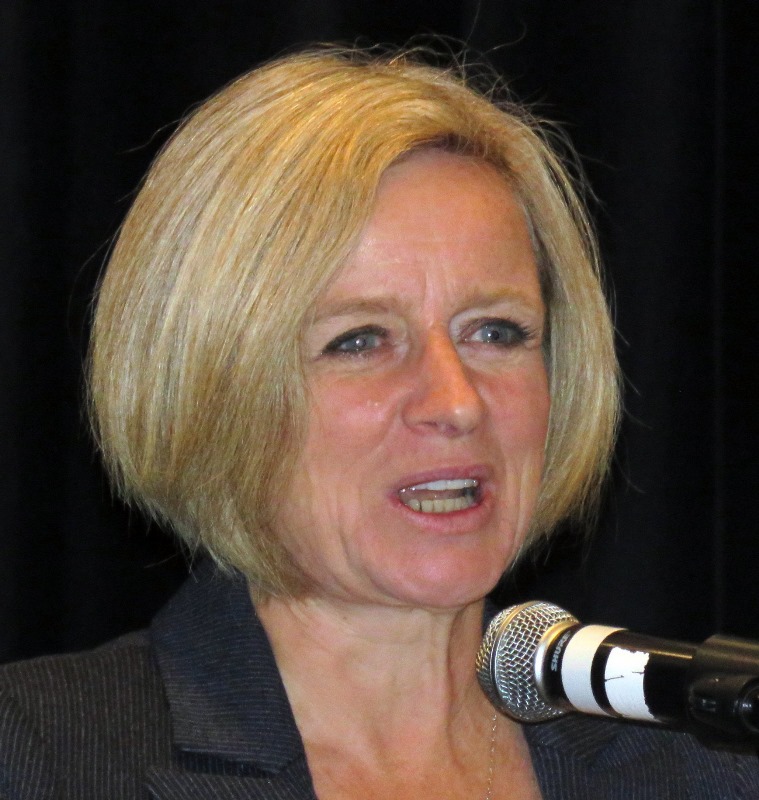 In her speech, Notley reassured Albertans that the province is aware that climate change is an increasingly worrying issue but noted that her government is taking steps to deal with it. The bottom line is that to date there are no energy sources available to compete with oil and until there is mankind will continue to put gas in their cars and jet fuel in their airplanes.

“Climate change is real; it threatens our kids, our grandchildren, our cities and towns,” remarked Notley. “It is a huge problem. We also face flooding, fires, blizzards and tornadoes. Our kids and our grandkids will rightly blame us if we run from these problems. To tackle climate change we have to take meaningful steps to reduce (greenhouse) emissions. As Canada’s largest energy partner Alberta has a unique responsibility in this regard; it’s a responsibility that I accept, and I believe most Albertans accept. Some, however, believe that climate change is a hoax cooked up by nefarious forces pulling the strings on some crazy world-wide conspiracy. I know this because some of them glare across at me in the aisles of the legislature.”

Notley went on to talk about the hundreds of thousands of Alberta workers and their families who depend on the energy industry to put food on their tables and a roof over their heads.

“As we see around the world, TV reality stars, climate change conspiracy theorists and right-wing demigods are the ones who flourish when working people are kicked to the curb. As a premier leading a government committed to advancing the economic interests of working people, I am not about to let that happen on my watch.”

The premier went on to talk about the many projects the NDP has created to modernize the province by putting people to work, including the construction of 240 more schools around the province, new hospitals, highways, bridges, petrochemical plants, wind farms and solar energy projects, something she said, “are all under construction, creating jobs, and fueling our economic recovery.”

Notley went on to say that the province has “established North America’s most forward-thinking climate plan, one that does something that too many other climate plans have failed to do and that’s to put working people first, not last.”

Both Berman and Notley gave powerful speeches, both were eloquent and believable, demonstrating a respect for one another that you don’t often find when opponents of any issue sit down to talk.

Berman’s plan is a solid one, but at the moment only possible in an ideal world. We cannot move from one place to another without oil; we cannot heat our homes or fly to our favourite vacation destinations without fuel.

Several important elements regarding climate change, pipeline expansion and keeping Albertans at work were not mentioned during Berman and Notley’s persuasive argument; one is the fact that while the world price on oil is $72 a barrel, Alberta only receives about $20 per barrel because there’s a glut of oil in the province and no sound or safe way to move it out of Alberta. With an increase in railway accidents and oil spills from out-of-date rail cars the only other solution is a better pipeline system and until other energy sources are made available and proven to be effective there is little alternative at the moment. Today, the construction of the Trans Mountain Pipeline is imperative; without it Alberta’s oil will stay in the ground and its workers will remain unemployed.

Also forgotten by the two speakers is the fact that since August 31, 2018 the Trans Mountain pipeline system is now part of a new “Trans Mountain Corporation”, a wholly owned subsidiary of the Canada Development Investment Corporation – an entity that is accountable to the Canadian Parliament.

When the orations were complete, and the smoke had cleared, no one emerged victorious. But given the fact that Premier Notley received the only standing ovation from the attentive audience, the decision goes to her.