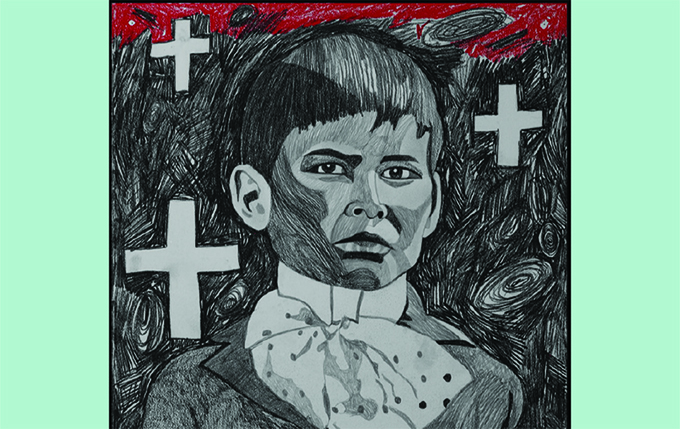 (ANNews) – George Littlechild, an award-winning Indigenous artist, currently has an exhibition at the Art Gallery of Alberta (AGA) entitled: Here I am – can you see me?

It is a series of 22 drawings that depict First Nations children who perished while attending residential school in Maskwacis, Alberta.

Join Edmonton’s Historian Laureate Amber Paquette on December 16  for a one hour tour of this powerful exhibit – both in-person and via zoom. Registration is required – click here to register.

Here I am — can you see me?, curated by MJ Belcourt, marks the first inaugural exhibition of Littlechild’s work, not only to members of the public, but as a complete series. 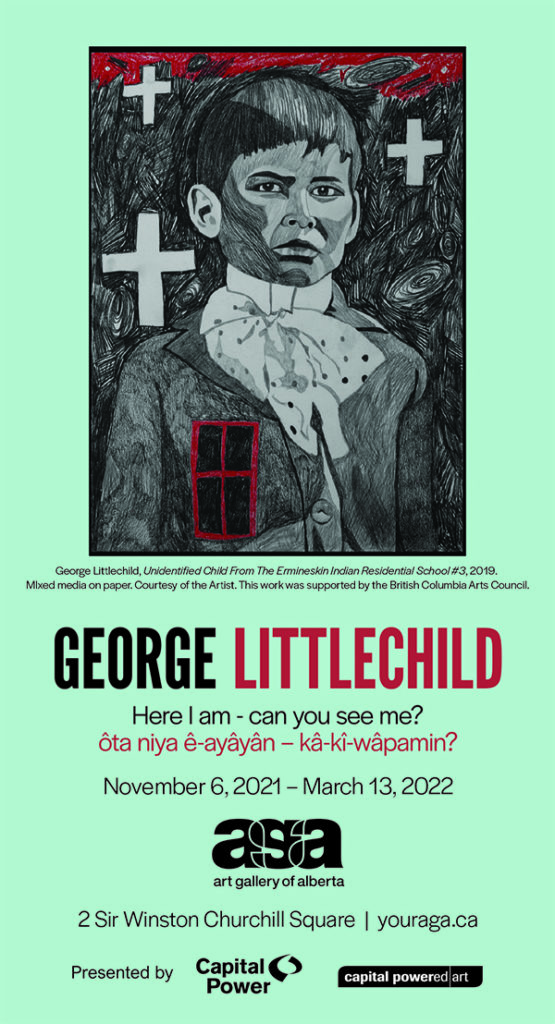 “This is the first time I have seen this work displayed together,” he said.

The collection began as a personal mission of Littlechild’s to identify previously unknown children in archived Residential school photos.

Littlechild asked multiple elders— all of whom have passed away since the initial questioning — about the photographs he had collected and found that a small percentage of children were unable to be identified.

“In these photographs there were always certain children no one knew. Why didn’t they know? [The elders] seemed very clear. They would identify about 88 per cent of the photograph — they knew all the kids names,” he said.

He then took it upon himself to draw the unknown children.

“I really felt like it was my responsibility to tell their story,” he said. “What happened to them? Did they die at the school? … Why does no one know who they are?”

“I wanted to give each and every one of those children in those photographs a voice.”

Littlechild also shares a personal connection to the residential school issue as he mentioned many family members who experienced them first-hand. He is also a 60s scoop survivor who was taken from his family and experienced traumatic abuse.

Residential schools were government-sponsored, church-run educational institutions that were made to forcibly assimilate Indigenous children into Western culture.

“Can you imagine someone coming to your home and taking your children away? And you never saw them, perhaps ever again. Cause that’s what happened,” Littlechild said.

The Truth and Reconciliation Commission of Canada conservatively estimates that between 4,000 and 6,000 children died while in attendance.

“I want to give remembrance, recognition, honour and validation to the thousands of innocent children that nobody is able to recognize as they stand amongst their fellow residential school students in the photographs, all but forgotten in the museum archival collections,” said Littlechild.

“In this manner I seek to legitimize their lives and restore a modicum of dignity and importance to their short existence in the world.”

Littlechild received a diploma in art and design from Red Deer College in 1984, and later obtained a B.F.A. from the Nova Scotia College of Art and Design in Halifax in 1988. He also received an Honorary Doctorate Degree from the University of the Fraser Valley.

The Art Gallery of Alberta is located at #2 Sir Winston Churchill Square in downtown Edmonton. For information call 780-422-6223. Pre-register for in person and online tickets at youraga.ca. COVID health and safety protocols will be strictly enforced.