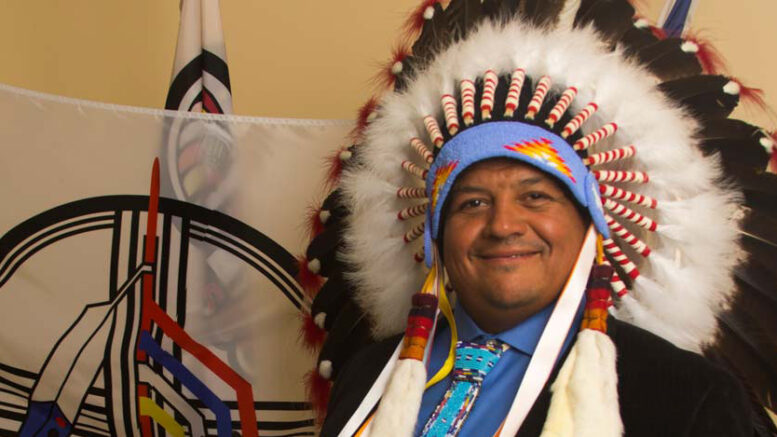 (ANNews) – The chiefs of Frog Lake First Nation and Kehewin Cree Nation say they’re grateful for the Pope’s participation in this year’s Lac Ste. Anne pilgrimage, but there’s still much unfinished business when it comes to reconciliation.

Frog Lake Chief Greg Desjarlais acknowledged there were “mixed feelings” about the Pope’s apology for the Catholic Church’s role in operating residential schools, which occurred in Maskwacis the day before the pilgrimage. But, overall, Desjarlais said it was a “good day.”

“Even though people were upset … I believe the ones who were there felt the love, the kindness [and] the sincerity of the apology,” Desjarlais said.

“I am here because the first step of my penitential pilgrimage among you is that of again asking forgiveness, of telling you once more that I am deeply sorry,” he said. “Sorry for the ways in which, regrettably, many Christians supported the colonizing mentality of the powers that oppressed the Indigenous peoples. I am sorry.”

The pilgrimage at Lac Ste. Anne was “another beautiful day,” he said. “I actually cried today. I thought about the people who didn’t make it to today, I thought of the people in the graves being found — the young kids, maybe some teenagers. I also felt the love.”

The question is what comes next, he added.

“We have to have a plan,” said Desjarlais. “Instead of building jails, build healing centres, where we can work on the basic well-being of families — lift families up and keep families together. Have our children have two parents so they can prosper.”

He said the Vatican also needs to have a “serious look” at the Papal Bulls and Doctrine of Discovery, which were used to justify the genocide of Indigenous peoples. “That would really help our people move forward,” said Desjarlais.

Chief Trevor John of Kehewin, whose grandfather was one of the signatories to Treaty Six at Fort Pitt, said he felt the Pope’s apology was “heartfelt and sincere,” but like Desjarlais recognized there were “mixed emotions” among his people.

He said many Kehewin Elders were confused about why the Pope was gifted a traditional headdress from the honorary chief of Ermineskin First Nation, Wilton Littlechild.

“But at the same time, we have to honour the community of Maskwacis and the four bands and their chiefs, and the decisions that they make for themselves,” John said, adding that the Elder’s appreciated the Pope’s remorse.

The pilgrimage was “very powerful to see,” with the Pope blessing this generation and the next, John added.

As for next steps, John said there’s still much healing to be done, echoing Desjarlais’s call for building more healing centres.

Be the first to comment on "Frog Lake, Kehewin chiefs call for more healing after Papal visit"