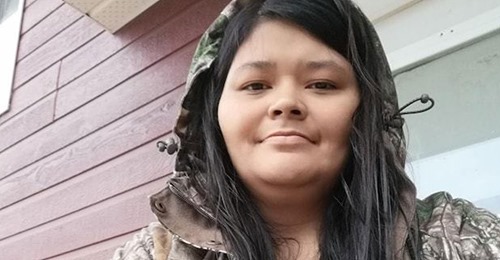 She went into the hospital due to stomach problems and what followed was a brutal, apathetic, inhumane, and sadistic display of medical malpractice – and dare I say, an execution conducted by those nurses and medical professionals in Joyce’s care.

And the only reason Canada is aware of this is because Joyce streamed her situation on Facebook Live shortly before she died.

In the Facebook video, she is complaining in her Native tongue that she fears the nurses gave her too much morphine – which she is allergic to. Here are some of the things the nurses said to the screaming, dying Joyce Echaquan:

“You made some bad choices, my dear.”

“What are your children going to think, seeing you like this?”

“She’s good at having sex, more than anything else.”

The nurses also called her “stupid as hell.”

Since then, three investigations have been launched: two will be conducted by regional health authorities, one will be looking into Ms. Echaquan’s case and another into practices at the hospital.

According to the province of Quebec, the nurse and attendant have been fired. It’s not clear if they’ve lost their licenses or whether they’re banned from working until the outcome of an investigation – it is clear however, why they would want to keep the names of the executioners anonymous.

Canadian Prime Minister Justin Trudeau called the incident “the worst form of racism when she needed the most help.”

“This is yet another example of systemic racism. It is quite simply unacceptable in Canada,” said Trudeau. “A rapid investigation is essential to establish if it was more than just simple racist words. We urge Quebec to take quick action and we will do our utmost to eliminate racism where it exists and to support people who are affected.”

New Democrat Leader Jagmeet Singh also spoke on the matter by apologizing to Ms. Echaquan. “With her last breath, Joyce Echaquan asked for help,” said Singh. “This was an Indigenous woman who died at the hospital while the hospital staff ridiculed her. I am very sorry, Joyce, the last moments of your life should not have ended like this.”

Quebec Premier François Legault said, “The nurse, what she said, is totally unacceptable, it’s racist and she was fired. We must fight this racism.” However, in early June of this year, at the height of the BLM movement, Legault denied the existence of systemic racism within the province, while also somehow standing “in solidarity with people who denounce racial violence.”

Shortly after Joyce’s death, a motion in favour of fighting anti-Indigenous racism was put forth by the National Assembly, with Legault responding to the motion by saying, “I continue to think that there’s not a system of racism.”

“I really don’t think we have this kind of way of dealing with First Nations people in our hospitals in Quebec, Yes there is some racism in Quebec. We’re working on that,” said Legault, while still denying the existence of systemic racism.

And so despite Legault’s condemnation, the Quebec Premier was not invited to Joyce’s funeral because of his beliefs regarding systemic racism.

“After his [Legault’s] position on systemic racism they [the nation] were not comfortable for him to be there in the community.”

“What’s going on with the public inquiry, the investigation, they still have doubts, they lost trust in the public system. We’ve had two apologies this year from this premier, now we need action,”  Awashish said.

Carol Dubé, Joyce’s husband, pled to Canadian Member of Parliament Carolyn Ann Bennett and Minister of Indigenous Services Marc Miller, “I’m asking you to find me some answers because all I’ve got are questions and condolences, but no answers. There’s no human being that deserves to die with indignity, with humiliation and in fear.”

“I have seven children who find themselves without a mother,” Dubé said. “I am sad. I am so sad.”

Lorraine Whitman, President Of The Native Women’s Association Of Canada said, “It makes us wonder how many other Indigenous women are being subjected to this sort of abuse in Quebec and elsewhere in Canada but did not have the courage or ability to film their own distress.”

“We hope the tragedy will also spur the Quebec government to act on the 142 recommendations of the Viens Commission which concluded  last year that the province owes Indigenous people an apology for the way they are mistreated by the public service, including in the delivery of health care. And we hope that all levels of government begin to take seriously the Calls for Justice of the National Inquiry into Missing and Murdered Indigenous Women and Girls, and well as the Calls to Action of the Truth and Reconciliation Commission.”

“Only when governments recognize the harms that are being perpetrated against Indigenous people, take steps to correct them, and make the necessary reparations, will repugnant incidents like the one endured by Joyce Echaquan be prevented,” said Whitman.

Senator Patti LaBoucane-Benson said that the incident is “graphic proof that systemic racism against Indigenous peoples is real and its impacts are devastating. Systemic racism is the product of an entire system of long-existing structures in Canadian society. It manifests itself in our public institutions, including our healthcare system, where stereotypes, biases, and prejudices can have real life consequences. Denying that systemic racism exists is a barrier to reconciliation and contributes to further harm to Indigenous peoples.”

National Chief of the Assembly of First Nations, Perry Bellegarde, also released a statement saying, “Discrimination against First Nation people remains prevalent in the health care system and this needs to stop. I am encouraged that Premier Legault has expressed disappointment in this matter, but I continue to encourage the Quebec government to work with First Nations to fully implement the Viens Commission’s recommendations.”

“My sincere thoughts and prayers go out to Joyce Echaquan’s family and her seven children.”

Judging by the responses given by those in power regarding Joyce’s death and the lack of immediate action, it is easy to see that the bureaucracy of the Canadian Government is in itself a form of systemic racism, and until action is taken that is the conclusion I will hold.

The question now isn’t whether or not systemic racism exists in Canada, its how many more martyrs does Canada need before action is taken?