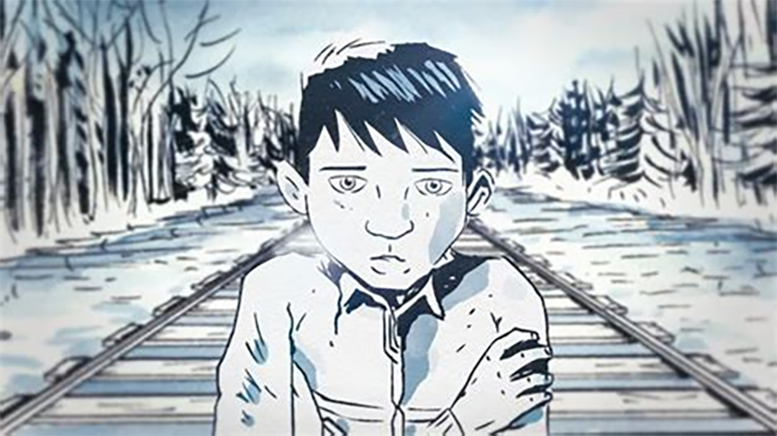 Image from 'The Secret Path' by Gord Downie and Jeff Lamire.

(ANNews) – Finding the Secret Path, directed by Mike Downie, was the recipient of a Canadian Screen Award for the 2020 Best Biography or Arts Documentary Program or Series.

Finding the Secret Path documents the last year of the Tragically Hip’s frontman Gord Downie’s life along with his efforts to bring awareness of the story of Chanie Wenjack and the tragic, dark and heavyhearted history of Canada’s Indian Residential Schools.

The documentary premiered October 18, 2018, on the one-year anniversary of the passing of Gord Downie and the 52nd year since the passing of Chanie Wenjack. Finding the Secret Path shares reflections from the Wenjack family, Indigenous leaders throughout Turtle Island, and Downie’s team that worked with Downie on the Secret Path.

When Downie discovered The Lonely Death of Chanie Wenjack news story, which was originally published in Maclean’s magazine in 1967, four-months after Wenjack’s passing, Downie made it his mission to make sure Chanie’s story was heard.

Misnamed Charlie by his teachers, Chanie Wenjack was only 12 years old on October 23, 1966, when he died alone and starving as he tried to travel 400 miles by foot to his hometown. Before his passing, Wenjack managed to escape the Cecilia Jeffrey Indian Residential School that he was attending and sought out to find his father who was residing in the Ogoki Post village on Martin Falls First Nation.

Downie was moved by the Truth and Reconciliation Commission’s Chief Commissioner Murray Sinclair’s description of the ‘Canadian problem’ on May 24, 2015, “This is not an Aboriginal problem. This is a Canadian problem. Because at the same time that Aboriginal people were being demeaned in the schools and their culture and language were being taken away from them and they were being told that they were inferior, they were pagans, that they were heathens and savages and that they were unworthy of being respected — that very same message was being given to the non-Aboriginal children in the public schools as well…They need to know that history includes them.”

The documentary originated from Downie’s effort to tell the story of Chanie Wenjack through a series of 10 poems he called the Secret Path. Secret Path later became 10 songs and then turned into an animated book followed by an animated film, illustrating Wenjack’s lonely journey home to find his father.

Since its release, the animated book and film Secret Path has been used as a learning tool in elementary and middle schools across Canada to teach children about the history of Indian Residential Schools through the acts reconciliation, awareness and education.

Under the Northern Sky: First Nation struggles are finding some success