The stunning art that appears on the cover of the December 2014 Alberta Native News is entitled “Forgotten World” and is the creation of the very talented contemporary Métis artist Timothy Mohan.

In “Forgotten World” Mohan is melding imagery from the various components of his own ancestry. The powerful eagle symbolizes his proud Aboriginal roots and the backdrop is a salute to his Celtic background. Together, the images are extraordinary. The bright colours made it a perfect choice for the cover of our holiday issue and the intricate designs within the feathers of the eagle give it a 3D perspective. All in all the look is very spiritual and reminiscent of stained glass such as you would find in a house of worship. The planetary figures in the background of the painting bring Mother Earth to mind as an ever present cohesive force in all things. The resulting image is magnificent. 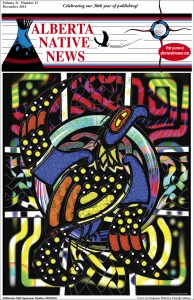 Mohan is no stranger to the Alberta Native News. His beautiful creations have been gracing our covers since 2002 and his artwork frequently appears on the inside pages as well. Most recently, his art appeared on the cover of our June 2014 issue, which was one of our most highly complimented covers over 30 years of publishing.

Mohan first received national acclaim for his motif “River Woman” used by Canadian fashion icon and recipient of the Order of Ontario Linda Lundstrom for her “La Parka” series. His artwork has appeared on the covers of dozens of publications and shown in countless museum solo exhibitions, including a special showing at the prestigious Toronto Intercontinental Hotel Centre during the Toronto 2010 G-20 Summit.

In addition to being a gifted artist, Mohan is community minded and has used his talents to help important causes such as Ronald McDonald House, Big Brothers / Big Sisters, Mothers Against Drunk Driving and The Canadian Cancer Society.
For more information on the artist and to view his most recent creations visit timothymohanmetisartist.yolasite.com.

Be the first to comment on "Featured Artist for December 2014: Timothy Mohan"