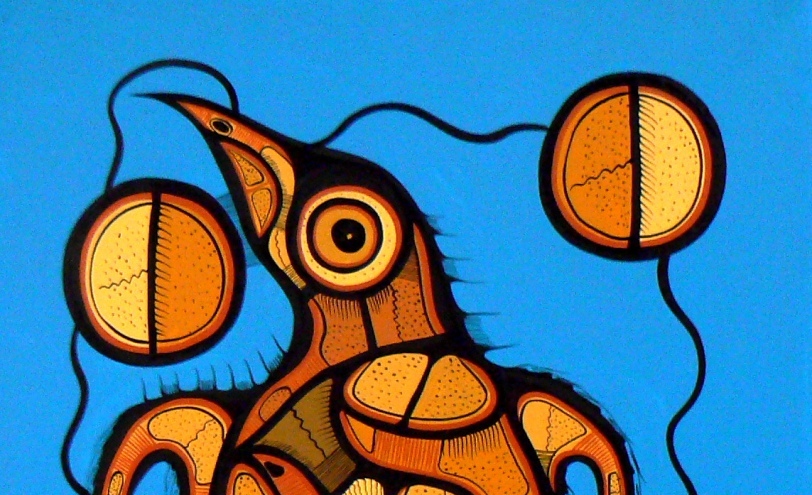 The beautiful art featured  on the cover of the April edition of Alberta Native News is “Nesting Loons” by Joshim Kakegamic, a highly acclaimed artist renowned for his talents in the Woodland style of Aboriginal art. It is part of an exciting collection of Woodland Treasures that will be on exhibit at Bearclaw Gallery in Edmonton from April 26 – May 9, 2014. An opening reception will be held at the gallery from 1 – 4 pm on April 26.

The Woodland Treasures exhibition features the unique and vibrant art of the Woodland School painters. The genre was created by Norval Morrisseau to express the visual imagery of sacred petroglyphs and Midewewin birchbark scrolls, myths and legends that had previously been culturally sheltered by the Ojibway people. 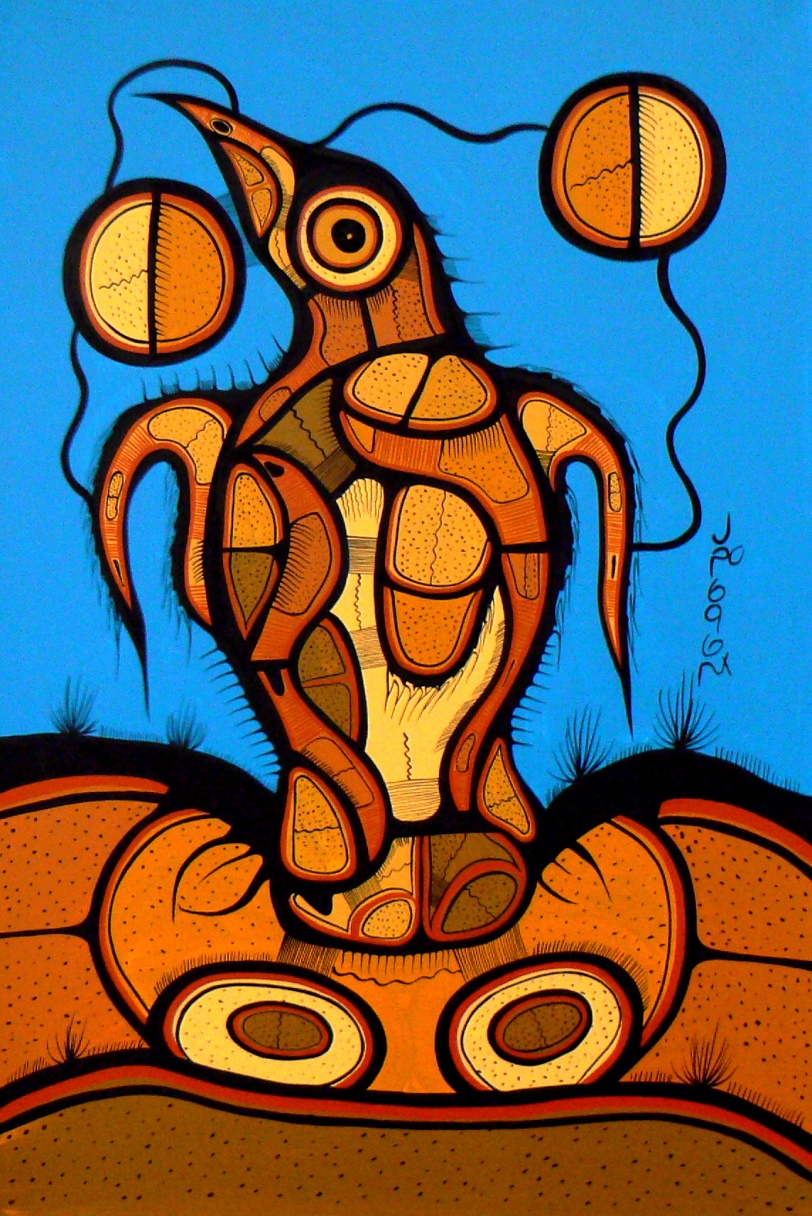 The distinct Woodland style was adopted by a group of dynamic artists that include Roy Thomas, Saul Williams, Carl Ray, Jackson Beardy, and Norval’s brother in laws Joshim and Goyce Kakegamic. These narrative works depict the legend and myths of the Ojibway people through stunning use of colour and x-ray perspective surrounded by predominant black form lines. The overall effect produces bright and vivid images similar in some ways to stained glass. The Woodland school has become one of the most recognizable forms of First Nations art and continues to inspire young artists today.

Born in 1952 in Sandy Lake, Joshim Kakegamic enjoyed early and extensive contact with his brother in law Norval Morrisseau and with Carl Ray. Josh studied with Ray and Morrisseau during their tour of northern reserves. He participated in his first group show in 1969 and presented a solo workshop in Fanshawe College in London Ontario. In 1973 Kakegamic and his brothers Goyce and Henry started the Triple K Co-operative, a silkscreen operation based in Red Lake, Ontario. Triple K Co-operative artists included Morrisseau, Goyce Kakegamic, Joshim Kakegamic, Saul Williams, Barry Peters and Paddy Peters. Triple K (named for the three Kakegamic brothers) became the largest and most successful Aboriginal economic development initiative in Northwestern Ontario, providing an infrastructure that resulted in many artists having their work exhibited and acquired by prominent art galleries and museums in Canada and around the world.

By 1975, Josh Kakegamic’s art was being shown at Aggregation Gallery in Toronto. He was a painter of technical virtuosity and an innovator in the field of Aboriginal print production.

Triple K produced high quality art prints which were both affordable and available. The company paved a path for Native artistic control, self representation and self  determination. They were part of a movement that provided opportunities for Aboriginal artists on their own terms. The company disbanded in the early 1980s.

Joshim Kakegamic died tragically when his snowmobile fell through the ice while he was on a rescue mission trying to save the life of another man in 1993. His art lives on in art galleries and museums and as part of this exquisite collection of Woodland Treasures.