(Red Deer) – The breathtaking image that appears on the cover of the June edition of Alberta Native News is a Self Portrait Warshirt by Joane Cardinal Schubert – part of a stunning exhibit entitled The Writing on the Wall: the Work of Dr. Joane Cardinal Schubert, RCA –  that is currently featured at the Red Deer Museum and Art Gallery.  This extraordinary exhibit was organized by the Nickle galleries of the University of Calgary and showing at the Red Deer Museum + Art Gallery until August 12, 2018.

Joane Cardinal Schubert (1942-2009) was an artist with an expansive visual vocabulary and a passion for justice. She used the medium of painting to explore her Kainai roots and the history of injustice suffered by the Indigenous people of Canada.

Joane grew up in Red Deer Alberta. She attended Lindsay Thurber High School. Although she was not a good student, she enjoyed research and reading. She read everything – from history to literature to current events. 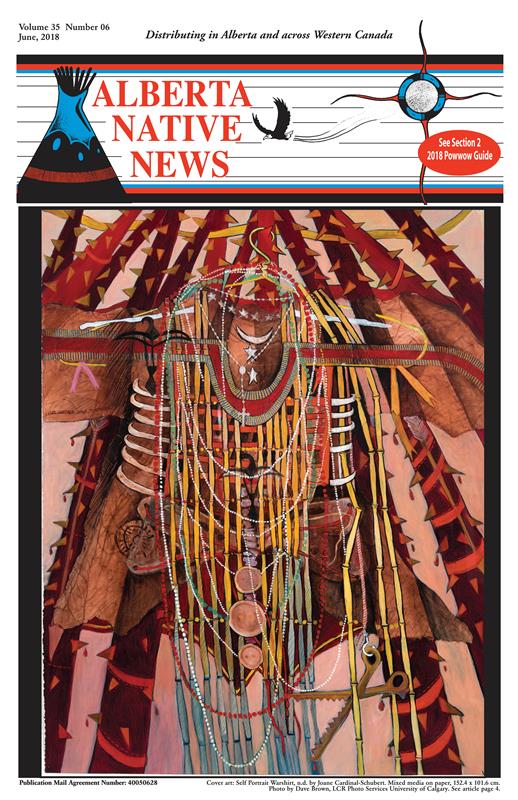 When she graduated from high school, her father suggested that she attend the Alberta College of Art and Design. Joane resisted at first, but ultimately she pursued studies in painting at ACAD, the University of Alberta and the University of Calgary. She developed a very unique style of painting, using lots of colour and contemporary approaches to imagery that included images of ancient petroglyphs. Red became a very important color in her work.

After her university studies, Joane worked for Nickle Arts Museum, and this museum work provided important inspiration for Joane’s work as an artist. She visited museum collections to look at artefacts from her Kainai heritage. She was appalled to see the cultural materials of her ancestors wrapped in plastic and inaccessible to the descendants of the makers and owners of the objects.

Joane also visited the petroglyphs at Writing on Stone in southern Alberta. She was devastated to see how these ancient works of art had been damaged by vandals, and she took great efforts to document the stone drawings as meticulously as she could. She later researched the drawings in archival collections to find photographs of them in earlier states, so that she could complete her renderings in detail. These images appear repeatedly in her work.

Joane’s research about the history of Alberta’s and Canada’s indigenous peoples, and her investigations of artifacts in museum and archival collections would inspire the development of her unique visual language.  Through her career she developed a visual code using those images. 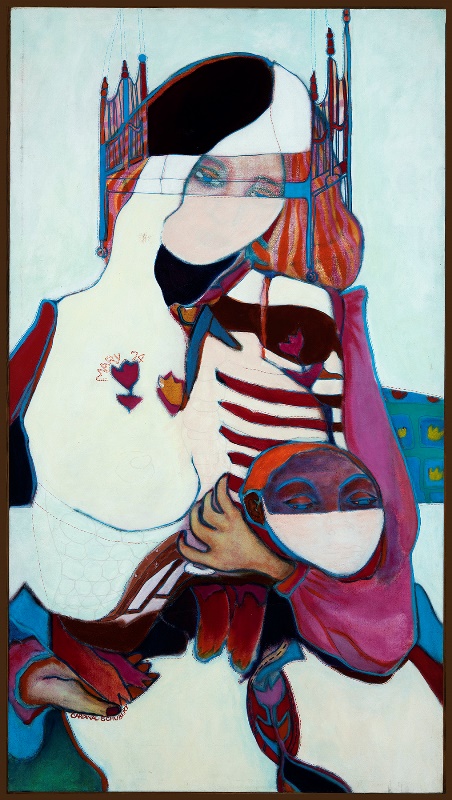 Once I Held a Rabbit (Mary), 1974 by Joane Cardinal Schubert. On display at Red Deer Museum + Art Gallery until August 12, 2018.
91.4 x 50.8 cm, Acrylic on canvas.
From the Estate of Joane Cardinal-Schubert. Photo by Dave Brown, LCR Photo Services, University of Calgary.

One of the earliest paintings in the exhibition is Once I Held a Rabbit. The painting is Joane’s reflection on learning that she was pregnant with her first son. The image is a self-portrait of Joane as a Madonna figure, crowned by a bedframe, and cradling a creature, that seems to be part human, and part rabbit. It is, in part, a reflection on the ‘rabbit test’, a pregnancy test that was used until the 1980’s. The woman’s blood was injected into a live rabbit, and if the woman was pregnant, the rabbit would begin to exhibit physical signs of pregnancy. The rabbit’s reaction could only be determined by an autopsy, so the rabbit was killed to obtain the results.

Once I Held a Rabbit disturbingly blends the wonder of an anticipated pregnancy, with the horror that an innocent creature died to reveal the news. The white paint on a red ground, with sparks of red and blue throughout the painting, creates this feeling of at once the sacredness of motherhood, and the caring for all creatures.

Joane’s work was visionary. She was one of the first Indigenous artists to explore issues like the devastation of the impact of the treaties, the horror of the residential schools, and the collision of traditional and contemporary values. In The Great Canadian Dream – Treaty No. 7, a diptych that was created in 1978, Joane represents the signing of Treaty 7. The Indigenous people of southern Alberta gave up their hunting rights for food, reserve lands and treaty money. The left-hand side of the diptych appears to be straightforward portraits of key figures in the signing of Treaty 7, but on the right-hand side, Joane reveals what she learned about Treaty 7: that one year after signing, people were reduced to killing their horses for food and eating gophers. The second image swirls with misery and pathos, with a woman and child huddling in the center of skeletal buffalo and horses and a ragged teepee. While a small red halo surrounds the figures, the white and brown tones unmistakably show bleak devastation. 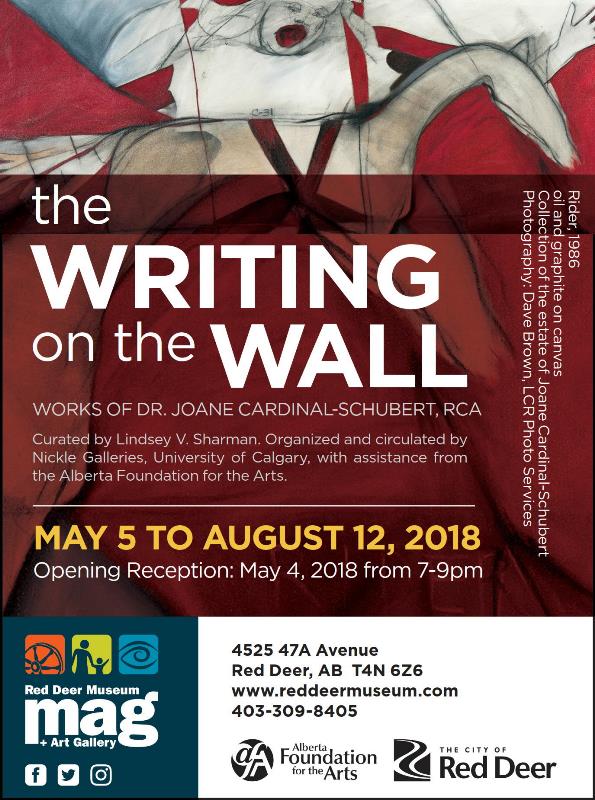 One of the images that Joane used throughout her work was the image of the war shirt. Inspired by war shirts that she had seen in museum collections, Joane used the image of the war shirt as a metaphor to explore the different kinds of ‘armour’ that individuals use to shield themselves from danger. Joane created a war shirt for the earth, depicting the need to protect the environment, an urban war shirt, Metro-Techno – a humorous comment on the challenges of urban aboriginals. She created a war shirt as a self-portrait, and images of the war shirts appear throughout her work as the symbols for protection from the many perils of everyday life.

One of Joane’s most powerful works was an installation piece called The Lesson. First installed in 1989, this work is a devastating lesson about the impact of residential schools. The installation is a mock-up of a classroom. Two of the walls of the classroom are backboards on which Joane has written ‘the lesson’ of the devastation of residential schools on Indigenous people across Canada, and a chronicle of injustices inflicted on indigenous people. The visitor is invited to take a piece of chalk and add to the list of injustices. It is an insightful and angry work – and it foretells much of the work done by the Truth and Reconciliation Commission, almost 20 years later. 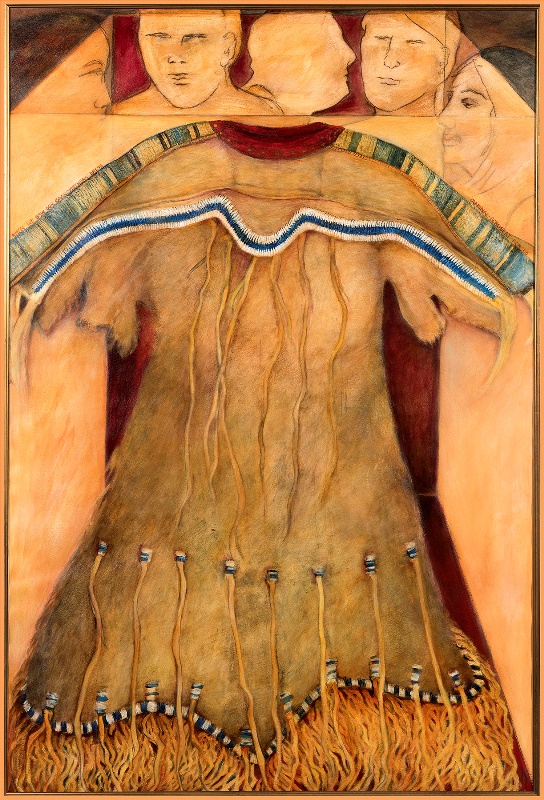 Joane used dreams and memory and rage as inspiration for her work. The beautiful image on the cover of this month’s Alberta Native News, entitled When We Saw our Grandmother’s Dress, documents the story of a Kainai woman’s dress. The dress was acquired by the Earl of Southesk on a hunting trip to Alberta in 1859-60, and taken to Scotland. It was purchased by the Royal Alberta Museum in 2006. Joane was a strong and effective advocate for First Nations artists, and, for her, the acquisition of this dress was bittersweet. While it was gratifying to see the dress with its exquisite beadwork and quillwork, there was also the flash of recognition that the true story of the dress belongs to the ancestors of the woman who made and owned the dress. In her painting of the dress, Joane is careful to document the details of the beauty of the dress. At the top of the image, are sketches of faces – perhaps the owner, perhaps the Earl of Southesk, perhaps the descendants of the maker. The painting underlines the value of having access to one’s cultural heritage.

Joane Cardinal Schubert was an artist of outstanding talent. She invented her own unique visual language to explore and interpret her own exploration of her Kainai heritage, and to explore the broader issues of being an indigenous woman in Canada. She was a tireless advocate for Indigenous art and artists, and she was instrumental in building the Alberta Foundation for the Arts Indigenous art collection. Her work is beautiful, provocative and inspiring. Although Joane was invited to become a member of the Royal Canadian Academy, and her works have been collected by the National Gallery of Canada and the Alberta Foundation of the Arts, her work is not well-known. It should be.

The Writing on the Wall will be on display at the Red Deer Museum + Art Gallery until August 12, 2018. It is accompanied by an exhibition catalogue with full-color illustrations of the works in the exhibition.