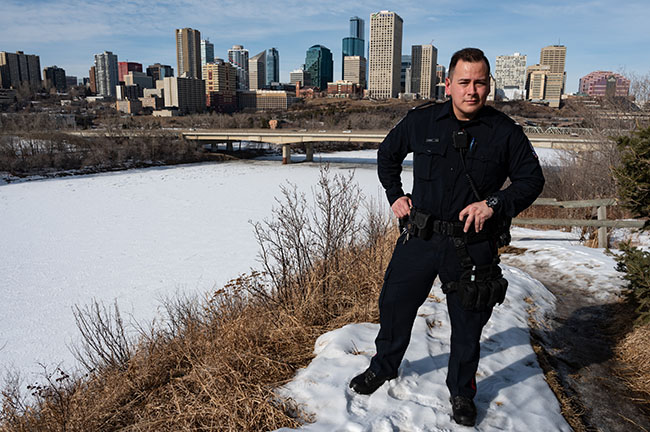 Constable Nathan Kennedy has overcome great obstacles on his journey to becoming a member of the Edmonton Police Service. (Photo: David Benson)

(ANNews) – We are inundated with “against all odds” stories that fill our social media and cable channels. Usually sensationalized and dramatized, they are a far cry from reality.

Cst. Nathan Kennedy, however, has a real story about a self-professed “bad kid” who scaled a mountain range of odds to fulfill his dream of becoming the calm for others. 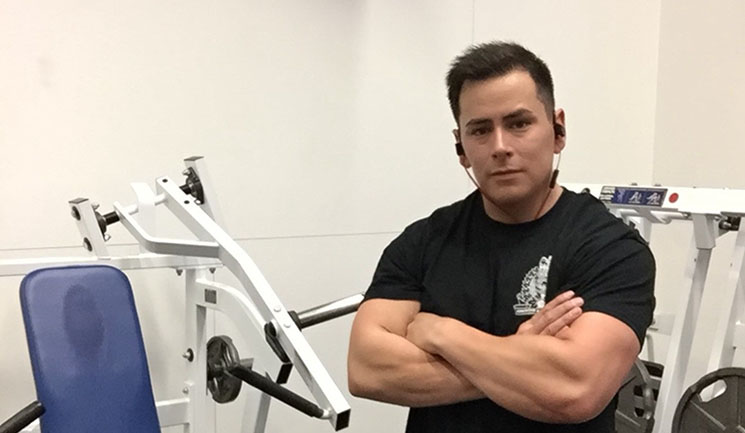 Now a six-year veteran with EPS, Kennedy was taken from his Cree/Chipewyan mom and, along with his younger brother, became a ward of the government and placed into foster care before the age of five.

The brothers jumped back and forth from foster home to foster home, (a package deal), finally landing with a family that “…is my family to this day, no question.” Kennedy recalls, “We came to their house and the first thing they said was ‘We’re gonna love you and we’re gonna keep you’ – that was huge.”

Having given the boys every opportunity to develop an interest in something, nothing seemed to hold Nathan’s interests except trouble. But the family was patient with Nathan’s conditions and supported him in every way.

“The meds were a sore spot for me when I was twelve. I held a lot of internal regret and resentment for having to take meds in order to function as a person. I would stop taking them because I told myself I don’t need help.” But the inconsistence with meds was problematic.

After ten years of destroying his foster parents’ property, skipping school and stealing, his parents sat him down and told him he had to go. “Even on the day I was moving out to the group home, mom was crying and I was crying and my dad was emotional, but mom knew I was going to be ok.”

At the group homes Nathan learned additional skills, scheduling, and soon moved to integrated living. “It was amazing,” enthused Kennedy. “During that time, I had to maintain check-ins, actively seek employment, it was perfect. Throughout all of this I was connected to my (foster) family.”

Kennedy describes wanting to be a cop from his earliest memories. “My biological mother, who is now deceased, was part of this community in Edmonton; the roads that I drive and the calls I go to, very often bring me to one of the houses we lived in.”

Kennedy describes being a victim of severe child abuse by his mom’s boyfriends. “One of my earliest memories as a toddler was being thrown down a flight of stairs because I was crying. I remember that image; looking up at this burly man standing at the top of the stairs as I’m crumpled at the bottom of the stairs.”

His biological mother was heavy into drug and alcohol use, as was her boyfriend. He describes often being left alone as a toddler with his baby brother crying in the bassinette.

“One time, we hadn’t eaten in so long, my brother is crying, his diaper is filled to the brim, daylight is turning into dusk, bottles strewn everywhere. So I remember using a chair, getting up and (at four) using the stove to make macaroni and cheese.”

Through those short years, his early memories involved copious amounts of police visits. “They were always at my house. And as a three or four-year-old, the only thing that I could correlate the presence of police in uniform to was with calm. Any time they came to my house, I was able to breathe. It meant he couldn’t hurt me or her. It meant she was getting help. The minute we heard the hard knock on the door, I didn’t have to take care of anybody.

“After being a ward of the government, it was not a straight path to being an officer. I was paying my bills and doing the right things but then after a few years I started gambling, which turned into a very serious problem. I was always playing catch-up and always trying to reacquire what I had spent. I soon became homeless and I stole to eat.

“It was shortly after I lost everything that I met my wife. We had a mutual friend that introduced us. We moved into our own apartment soon after, and I became an industrial painter, became a foreman, I became an inspector and went to school to get my red seal journeyman, finally becoming a certified corrosion engineer/inspector.

One day, Kennedy met up with a friend who had just become a police officer. “I had a criminal record and thought I had lost any chance of ever being a police officer when my friend said: Why don’t you just apply because, you never know.”

Kennedy started the process of getting a pardon which, after a long year, ended in denial due to “…the gravity of my record.” He felt defeated until deciding to appeal; a challenging process that would take a few more years.

The day Nathan Kennedy’s dream was realized, he was walking around Home Depot. “So I get the call, ‘Hey, it’s your file manager Paul, you got a minute?’ I almost prepared myself for disappointment. He said ‘So after a review of your file I regret to inform you that you’re going to have to let your employer know you aren’t going to be working for them anymore.’ I remember holding that piece of moulding and just staring at it and all I could say is: That’s great news!”

There’s a difference between empathy training and having lived it and that’s why there is a big push for diversity in police forces across the country. “Every single person that knows one iota about me says this is something I was meant to do,” enthuses Kennedy. “Obviously I lost sight of it for a bit but the road to success is not a straight line, nor should it be. You never want to discount the work or the path anyone else has walked.”

“I’m completely appreciative of the inroads, (compassion and sensitivity training) that EPS is doing and they are making huge strides. In the six years since becoming a cop there’s been more diversity in race, identity and sexuality, but it takes time.”

When asked what message he would offer to Indigenous and other marginalized communities that may fear police, Kennedy’s tone softens. “What’s the only way you can get over a fear? By confronting it. That’s hard for people to fathom especially for those that have gone through serious trauma. I could have gone the way of a complete criminal, but I learned that I am the only one that is going to change my outcome.”

Kennedy urges would-be applicants – especially within the Indigenous community – to not be afraid of applying. “Reach out to me and I will do everything in my power to help facilitate that. I want to see all races of people applying because we need to continue to see that diversity in the EPS and that positivity in the community.”

4 Comments on "EPS Officer Nathan Kennedy: On becoming the calm"