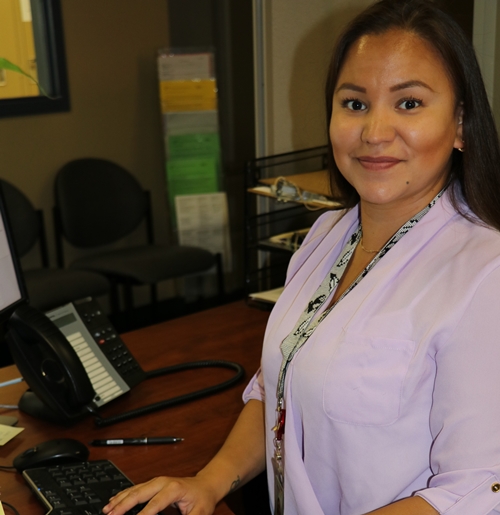 (ANNews) – Historically, employment in the workforce was never really an issue. Aboriginal people trapped, hunted, fished and gathered to support their everyday needs of life.

This picture has, however, changed dramatically over the years. It has especially changed in urban centres where an estimated fifty percent of Alberta’s Aboriginal population lives. Additionally, that number continues to grow.

The transformation from rural to urban life has been harsh for Aboriginals, many who do not have the tools – financially and educationally – to establish a path leading to good health, housing and amenities.

Let’s look at one individual who has managed to break down such barriers and is today enjoying her position of helping others to help themselves.

For Janvier it’s like a dream come true. Although she may someday go on to higher education, she harboured a longtime passion to work at the college where she acquired some of the post-secondary education that laid the foundations for her eventual degree from GPRC.

Originally from the Dene First Nation at Cold Lake in northeastern Alberta, Janvier moved to Edmonton at age 12 but was never educated about her mom’s First Nation heritage. “My mom knew very little” in that regard, she explains. Here lies the void in her own life – she had a formal education but no traditional knowledge or education.

For Janvier, she was not a “complete” being. What ultimately joined the circle together to make it whole was her son who was thirsting for answers to questions she could not answer. So, thanks in part to his inquisitive nature, she immersed herself in research that would satisfy her desire for the knowledge she lacked.

“I didn’t grow up traditionally,” she confesses. “It was not an issue until my son started asking (about our cultural heritage).”

It became the spark that stoked the fire inside her to know just what she was all about. While researching she also began attending Aboriginal events and learning traditional practices in the Grande Prairie region. She learned through experience – things like scraping hides, making drums, scaling fish, and more.

She learned a lot – about her people, about her culture, about herself. It was that other part of her education, the part she had missed out on all those years.

Formal education had always been her classroom, but when she went north to Grande Prairie her education in the community and in the culture she hadn’t known, became her other classroom. All this, thanks to her inquisitive son.

As for her siblings – a sister and two brothers – her sister is likewise pursuing post-secondary education. She’s studying at Portage College in Lac La Biche “to be an accounting technician,” she says.

Apart from the inspiration provided by her son, it was her son’s dad who encouraged her to seek higher education for herself, she adds.

She also knew that there was “something more out there” that she could benefit from and that would help her set a course to leading a good, healthy lifestyle and be a good example for her son.

Then, too, there was that extra drive that stemmed from the wonderful staff at NorQuest. “They opened doors, lent an ear, and helped me find financial supports like funding from Oteenow for my education fees.”

It proved quite the ride for Janvier who, basically, struck out on her own at age 16. Many other young Aboriginal women that age have not been as fortunate and for this, Janvier counts her blessings. She now has an education, she knows her culture, she lives a good life and she is “content.”

As she herself states, “My goal was to work at NorQuest.” That she has accomplished. Now she happens to be in a position where she can assist others on their road to gainful employment, she explains.