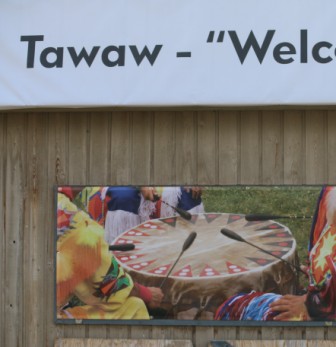 Kiyanaw, the Aboriginal event at Edmonton’s annual K-Days put on one fine array of performances this year and, yes, it was all for free!

Kiyanaw, “all of us, together,” explained organizer, Theresa Majeran, “is a place people can come to take in and learn about Aboriginal culture and traditions.” It’s a place where education happens and sharing transpires.

Up until two years ago, it was an indoor occurrence at the Northlands Agricom building where space was shared with the art exhibits and sales. Not anymore. 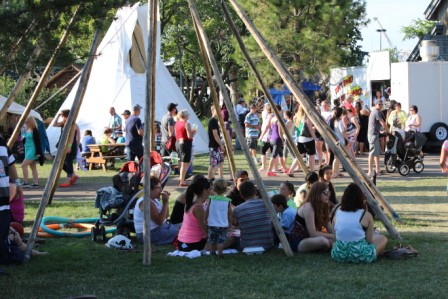 Scores of visitors arrived daily at the Kiyanaw village site during K-Days in Edmonton July 18-27. Article and photos by Terry Lusty

For the past two years, Kiyanaw has had a new home. It is now showcased at Klondike Park where the huge statue of Klondike Mike stands and where Edmonton radio CFCW used to conduct its country music entertainment.

This year the event grew a bit larger. There are now 16 structures on site – tents, tipis, craft booths, a Bannock Burger food wagon, and an outdoor performance stage. 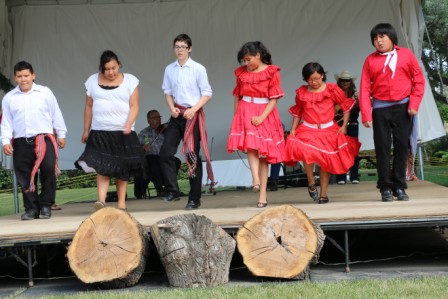 Many visitors remarked this year about how wonderful it is to tour the Aboriginal village-like area and to experience and learn, firsthand about the culture and heritage of the accepting First Nation, Metis and Inuit communities of the region. It’s like a huge, outdoor school that is interactive with those who stop, look and listen and learn.

MJ, a.k.a. Melissa Jo Belcourt Moses, the chief organizer of Kiyanaw is proud of her product. She was pleased to see all the happy faces in the crowd as they laughed at comedy, and snapped photos of performing artists such as traditional powwow dancers and drummers. She particularly enjoyed the facial expressions of visitors reacting to the high-energy, contorted motions of Conway K’s Red Power (hip-hop) Squad. 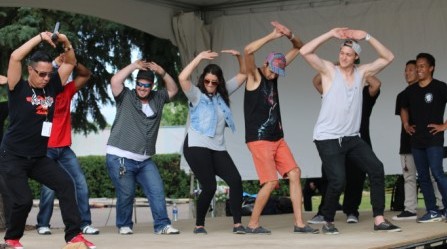 Then too, there was the smooth, melodic enchantment of soothing flute music by Amanda Woodward and the excitement of high-stepping Metis jiggers and square dancers from the Kikino Metis Settlement, a couple of hours drive northeast of Edmonton. Another crowd favorite was British Columbia talent, Bev Lambert, whose interactive approach not only educated people but drew them in to participate, experience and learn Metis dance forms in a fun way.

There were seasoned entertainers, vocalists like award-winning country artist Nathan Cunningham. This great talent not only wins National Aboriginal Music Awards, he came close to winning a Juno!

Some of the back-up music, in particular the Metis music stylings of fiddle music for the jigging and square dancing, was provided by veteran Alfie Mhyer, a noted Canadian fiddling champion. 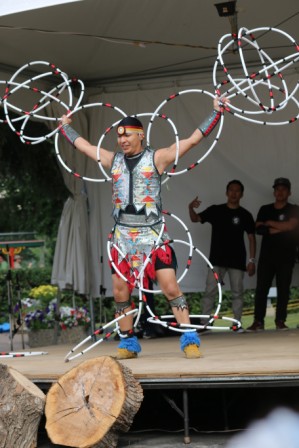 Lakota Tootoosis wows the crowd with his intricate  hoop dancing

Or, how about the intricacy displayed by First Nations hoop dancers Lakota Tootoosis and Kelsey Wolver?  A couple of awesome show-stoppers those two. People are, like, “how do you guys do that!?”

But, that isn’t all. Yes, there was more.

The Inuit not only offered traditional food samples but their skill at throat singing, a style that never fails to provoke the full attention and interest of the listener.

Indeed, it can all be most captivating and entertaining, even amazing! Couple this, though, with the congeniality and personal friendship exhibited by these many artists in addition to the cultural and historical display and craft items that were sold on site at reasonable prices since there were no “middle men” and no costly facilities to pay for.

As if all this wasn’t enough, MJ dreams of still “bigger and better.”

One thing she hopes to pull together is to offer more of the top-ranking performing artists like Nashville-based Crystal Shawanda, television actor and singer Tom Jackson, country vocalist Shane Yellowbird, B’C.’s Wayne Lavalee and many more.

“Again, you have to have the budget,” says MJ. If she had her way, the total area would be expanded, another stage could be added and more of a budget would help pay for additional “interpreters” who explain Aboriginal culture and traditions and the display materials on location so visitors could better understand and appreciate the Aboriginal story. Add to this, of course, the increased budget required to pay bigger names to entertain.

As for this year, MJ explains, “We worked with what we had and we used the local talent” to cut costs. People are saying they enjoyed what they’re heard, saw and experienced. They were impressed and learned from the artifacts and educational information.”

One RCMP officer that came up from the Calgary Stampede told MJ that she “really enjoyed the fact we were interactive.”

Majeran cut in to state, “Goota, the Inuit interpreter, said a family was curious about our culture. I shared my stories with them for over an hour. They learned so much from me. When they were leaving, their four year-old girl came to me and said her dad had remarked that this was definitely his favourite place to be during K-Days.”

MJ also mentioned the idea of featuring some of Dreamspeaker’s films in the future.